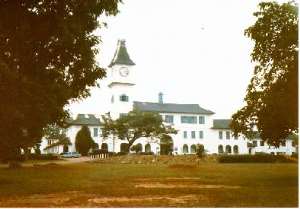 The Achimota Secondary School in Accra continues to face problems ranging from inadequate classrooms, lack of modern facilities, as well as the needed renovation on some of its old buildings.

As a result of this, the school is unable to meet the demands of the ever-increasing number of candidates, who though with good grades, do not gain admission to the school.

The headmistress of the school, Mrs. Adelaide Kwami, disclosed this in an interview with The Chronicle yesterday, and appealed to the government to come to their aid, as the school needs massive renovation.

Explaining, she said some of the classrooms are so small and overstretched that students have to sit very close to each other during lessons.

She noted that if this unfavourable situation were arrested, the school authorities would be in a position to admit more students with good grades, seeking admission into the institution.

Mrs. Kwami hinted that over the years, renovation works have been done by the Old Students' Association.

"They are gradually renovating some of the old buildings in the school to enhance teaching and learning," she underscored.

On the performance of the students, she said there has been consistent improvement in the academic performance of students since 1927 and that they have always performed credibly in the Senior Secondary School Certificate Examination (SSCE).

According to her, out of the 484 students who sat for the 2005 examinations, 319 obtained grades 'A' and 'B' in science and mathematics.

"Every year, we come out with 100% passes in science and mathematic subjects," she indicated.

Asked about the secret behind their performance, she told The Chronicle that it has been through the dedicated efforts of teachers and students alike.

But Mrs. Kwami does not believe in the grading of schools based on the performance of students in the SSSCE and thinks that quality teaching is the key.

She was boastful of the fact that many students from Achimota have gained admission into tertiary institutions, particularly the universities and polytechnics.

A student who spoke to this paper disclosed that in times of examinations, some of the students have to sit in the corridors in order to prevent exam malpractices such as copying.

She also complained bitterly of water shortage and its resulting situation whereby students have to break bounds and roam the community in search of water.

"This situation has seriously affected our studies since we start lessons very late," she lamented.

Earlier on, the 1956-year group of the Old Students' Association had handed over the keys to the fully-renovated Arts School to the headmistress.

Unveiling the plaque, the president of the Association, Sarah Lyn Mansaray, charged the students to adopt the culture of maintenance to keep the building and facilities in good shape.

The ¢150 million facility donated to the school, according to her, is to commemorate the golden jubilee of the group.

She explained that it is the duty of each year's group of the school to adopt projects based on their founder's day.

Mrs. Mansaray stated that the Founder's Day of the 1956-year group is this year, thus their decision to renovate the Art School.

Some of the projects undertaken by the various year groups, she noted, includes the renovation of the assembly and dining halls.