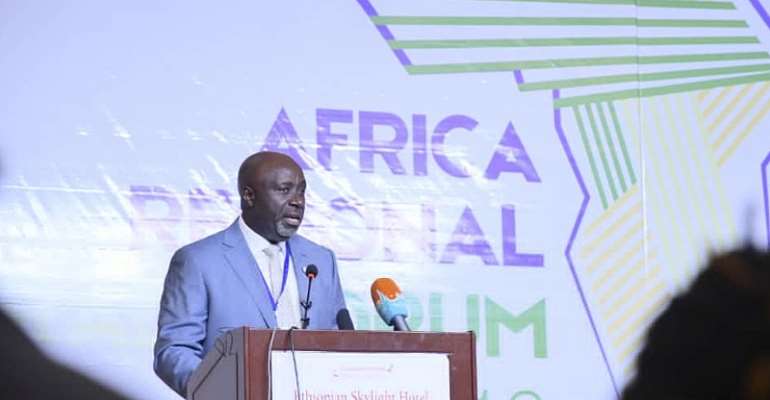 Addis Ababa, Ethiopia, June 27, 2019 (ECA) – It is critical that Africa develops its own manufacturing and research capacity, in particular its pharmaceutical industry, says Mr. Ali Mufuruki, Chairman and Chief Executive Officer of Infotech Investment Group and Vice Chair of the AfroChampions Club.

In a keynote address to a Horn of Africa trade forum focusing on the pharmaceutical industry, Mr. Mufuruki said the status quo for Africa was not sustainable, especially as pharmaceutical exports to the continent continue to enjoy significant and often trade distorting government subsidies of up to 40 percent making it difficult for local producers to compete.

Donor programmes currently account for 80 percent of all public health expenditures in Africa.

“Creating self-reliance and self-sufficiency in the provision of essential medicines for our people is key to ensuring stability of supply, especially when donor funding ends,” he said, adding over dependency on aid for healthcare was destructive to local industry.

The Global Fund, for instance, he said, is due to wind down momentarily and remedies to some tropical diseases were already being neglected for lack of adequate profits for multinational innovators.

“It is critical that Africa develops its own manufacturing and research capacity, in other words its own pharmaceutical industrial complex – manufacturing industries, research institutes, health insurance corporations, public funding mechanisms and others,” said Mr. Mufuruki.

He added that although the obstacles faced by the pharmaceutical industry in Africa were many and multifaceted, the biggest ones that if tackled could fundamentally change the industry for the better in the short time include, logistical and regulatory barriers to trade in pharmaceuticals; market size and market access issues; dumping by global pharmaceutical industries; and lack of local ownership of the public health agenda, especially funding and research.

He said in this regard the African Continental Free Trade Agreement (AfCFTA) was a game changer.

“The AfCFTA is designed to provide solutions that African nations need to deal with these challenges. The endorsement and ratification for the agreement by a growing number of African states will make it possible for the African private sector to seize the emerging significant investment opportunities that this vital sector offers,” Mr. Mufuruki said.

“It is important to note, however, that as is always the case in life, opportunities always go to those who are best prepared to seize them. Global pharmaceutical multinationals are always prepared and have been mobilising for a long time to continue to grow their dominance of this vital marketplace; the only market that has a sizeable space for growth in the foreseeable future and that is Africa.”

He continued: “We should spare no effort to make the AfCFTA a tool for Africa’s economic liberation. There is no better place to start doing this than with an industry that holds the key to the survival of the continent’s future generations and that is the African pharmaceuticals industry.”

Speaking on the same panel, Mr. Barry Faure, Foreign Affairs State Secretary of Seychelles said: “Consumers across Africa will benefit not only from the same rules but also from the same medicines at affordable prices throughout the free trade area. Which can be a game-changer in our fight against malaria, for example.”

He said Phase II of the AfCFTA negotiations, including upcoming discussions on competition issues and intellectual property rights, can help bring the drug market closer to the conditions of a single market.

Mr. Parfait Onanga, the UN’s Special Envoy for the Horn of Africa, said the continent was still at the crossroads.

“We need boldness to deal with critical issues facing the continent. We also need to realise that no country can overcome challenges of 21st century alone, we need to work with each other through instruments like the AfCFTA and succeed together as a result. We also need a surge in diplomacy for peace in every part of Africa because most of our problems are governance related,” he said.

Mr. Onanga said peace was vitally important for the development and prosperity of not only the Horn of Africa but the whole continent as well.

Ethiopia’s Chief Trade Negotiator and Senior Advisor to the Prime Minister, Mr. Mamo Mihretu, said; “Ratification and implementation of the AfCFTA is an integral element of a coherent and consistent trade policy that Ethiopia is pursuing. It helps us to realize the vision of an integrated Africa and creates market opportunities for private sector.”

Ms. Gertrude Mothibe of the Southern African Generic Medicine Association, emphasised the need for the continent to push to grow and strengthen its own pharmaceutical industry.

“Africans need to be bold to take and implement decisions they make about their continent without fear, especially industrialisation utilising the pharmaceutical sector. We have the skills and knowledge. All we need if an enabling environment and access to finance to succeed,” she said.

The theme of the forum is: “AfCFTA Implementation: Breaking Down Geographical, Logistical and Regulatory Barriers to Trade and Investment in the Horn to Boost Industrialisation: A Focus on the Pharmaceutical Industry”.