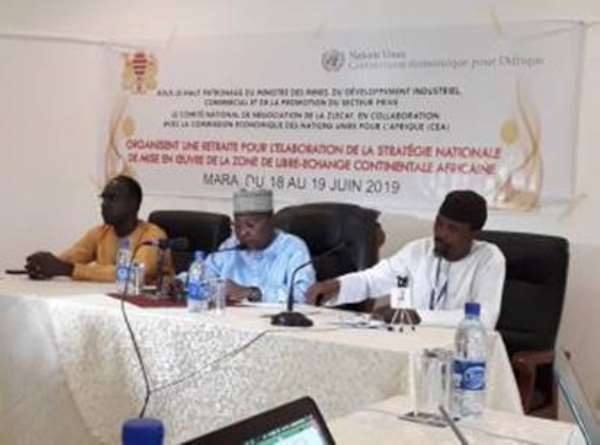 A retreat to size up the stakes of the African Continental Free Trade Area (AfCFTA) for the Republic of Chad and lay the foundation for the country’s strategy to leverage it, ended in Mara, Chad, at the weekend, with experts from the UN Economic Commission for Africa (ECA) allaying fears around the county’s participation in the continental common market.

At the retreat, co-organized by Chad’s National AfCFTA Negotiation Committee and ECA’s Subregional Office for Central Africa, bringing together State officials and members of the private sector, the main worries raised were Chad’s readiness to compete with Africa’s industrial giants and the fate of customs revenue for the country.

ECA’s experts – Adama Coulibaly and Simon Yannick Fouda – quickly comforted their Chadian interlocutors, referring them to recommendations of a recent subregional stakeholder meeting in Douala, Cameroon, in which key points for a Central Africa AfCFTA strategy were mooted to cushion the effects of competition and the short-term challenges countries may face on customs revenue.

As explained by the Head of Subregional Initiatives at ECA’s Central Africa Office, Adama Coulibaly, Chad’s Industrialization and Economic Diversification Masterplan (PDIDE) being prepared with ECA’s support, would constitute part of the answer to get the country started with AfCFTA.

The masterplan, in the offing, lays emphasis on energy supply, agribusiness (especially meat and leather products), construction works and the digital economy.

Participants called for coherence between Chad’s AfCFTA strategy and all other development strategies including PDIDE, a point which the country’s Minister of Mines, Trade and Industry Development and Private Sector Promotion Mr. Ahmat Mahamat Bachir, insisted on.

“This coordination is necessary in terms of support from technical and financial partners but also in terms of Government aligning its actions with international, regional and national development programs,” Minister Bachir said.

Participants called on the Chadian Government to use the advent of AfCFTA as an opportunity to quickly strengthen its standards, norms and measurers institutions, improve on official statistics and to avail the National AfCFTA Committee with the requisite resources to enable it prepare a solid national strategy for the common market.

They urged the National AfCFTA Negotiation Committee to draft-in experts from the customs services to earnestly finalize the list of Chadian products open for free trade.

The stakeholders also requested that ECA conducts a SWOT analysis on the Chadian economy, making the necessary linkages with its existing macroeconomic framework, production structure and trade flows; proposes detailed measures to mitigate the risks that would come with the continental trade agreement and indicates pathways for Chad to finance its participation in it.

ECA’s Adama Coulibaly assured Government and private sector leaders of the Commission’s determination and commitment to accompany Chad through the processes for operationalizing the AfCFTA.