Mahama Is The Most Deceitful Politician Alive – Ackah-Miezah 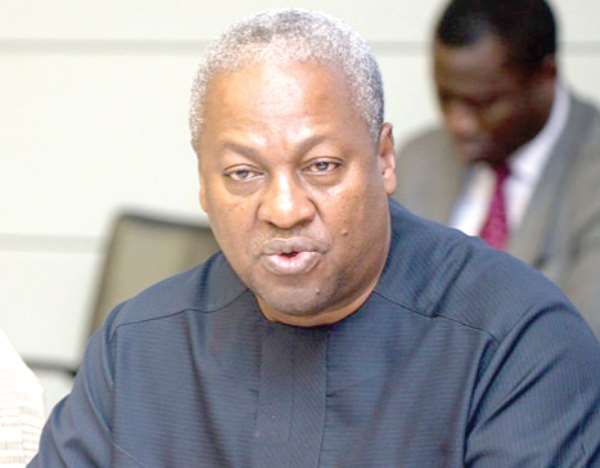 Speaking on Zylofon FM’s socio-politico-economic programme called ‘Ghana Agenda’, Ackah-Miezah said the recent statement made by the immediate past president and the flagbearer for the opposition National Democratic Congress (NDC) that he and his party have never gave false promises to win political power has crowned him as the most deceitful Ghanaian politician ever in the annals of Ghanaian politics.

Mr Mahama stated, “We are not the same as the NPP. We have always stood by the truth. We have not told false promises just because we want political power. We tell the people exactly what we can do for them and when we come into office, we make our best effort to deliver exactly what we said we can do for them,” Mr John Mahama said in a speech at the NDC’s 27th anniversary lectures, adding, “it was in 2016 that NPP elevated false promises to a historic level. It was just like anything the people want to hear because we want political power but you forget that when you have done that and you come into power, the reality will catch up with you.”

To this, Ackah-Miezah said he was not surprised that Mr John Mahama spoke that bald-faced lies because that is his nature. "It only affirms his disrespect for the good people of Ghana whom he already thinks have short memories so he can always do his usual politics of deceit and they would soon forget, but this time he has failed as most Ghanaians have seen that he is a deceitpreneur – always using deceit to win power."

He said in the run-up to the 2008 elections, Mr John Mahama, as the running-mate to the late Prof Evans Atta Mills, went and promised the chiefs and people of the Western Region that if they voted for the NDC, he would ensure that 10 percent of Ghana’s oil revenue be allotted to the Western Region only to swerve the chiefs and people of the region after they voted massively for the NDC to win that year’s election.

He recalled how the then NDC MP for Sene, Twumasi Appiah, and other leading members of the NDC were deployed to insult and attack the chiefs of the Western Region for demanding the 10 percent allocation Mr John Mahama had promised them.

Ackah-Miezah referred Mr John Mahama to the failed NHIS one-time premium payment promise he and his NDC made to the good people of Ghana on page 68 of the NDC’s 2008 manifesto.

The fine and fast-rising NPP communicator challenged Mr John Mahama that if he were not deceitful, he should provide evidence which shows that his government did exactly the promise he made to Ghanaians on pages 46 and 60 of the NDC’s 2008 manifesto of creating employment opportunities for all Ghanaians who were willing and were able to work and to provide every Ghanaian with a job.

“Again, on page 24 of their manifesto, the NDC promised to construct and furnish a standard Member of Parliament Office in the constituencies for each MP and pay one administrator identified by the MP a monthly stipend to be in charge of the office. In which constituency can you show me any of those offices they promised to build?”, he quizzed.

Mr Mahama and his NDC, he said, promised on page 24 of their manifesto to enact into law the Freedom of Information Bill but once again failed to deliver.

Ackah-Miezah observed that one of the evidences that will not make anybody doubt that Mr John Mahama is the most deceitful politician of our time is the promise he made in 2008 that the NDC government would not introduce any new taxes.

“You would all recall that launching the NDC’s 2012 manifesto in the Volta Region Mr Mahama said he would build 10 new Teacher Training Colleges across the country. Where are those training colleges? And this is the politician who says he has not told a lie before?,” Ackah-Miezah asked.

He said when Mr Mahama presented his “Critical Policy Action Of The John Mahama Administration” in August 2012, he promised to “maintain discipline in government expenditure so as to avoid unbudgeted expenditure that can distort the economy.”

Contrary to that promise, Mr Mahama instead embarked on reckless expenditure of Ghana’s money in the December elections leading to the worst fiscal deficit our country ever witnessed, which indeed distorted the economy just four months after promising to maintain fiscal discipline.

Ackah-Miezah said the only truth Mr Mahama said in that lecture was the statement he made that the NDC is not the same as the NPP. Whilst the NDC use deceit to win power, the NPP make honest promises like the Free SHS, 1D1F, 1V1D, One million per constituency IPEP projects, End to dumsor, restoration of teacher and nurse trainees allowances etc some of which have already been fulfilled whilst others are ongoing.

He said the deceptive and false promises Mr John Mahama and the NDC used to win the 2008 and the 2012 elections and mismanaged the economy with his incompetence are the same strategy Mr John Mahama is still going round peddling.

He urged the good people of Ghana to avoid Mr Mahama and his deceptive promises like leprosy.