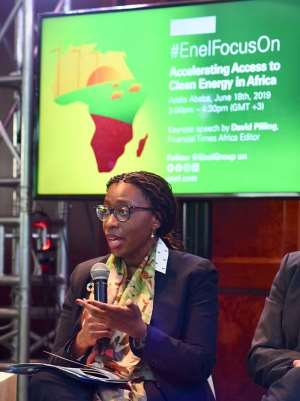 The power of partnerships and the strength of good regulations will deliver clean renewable energy for Africa at the scale and speed needed, allowing the continent to unleash its full potential, Economic Commission for Africa’s (ECA) Executive Secretary Vera Songwe said Tuesday.

Speaking at the 16th Enel Focus On which was organized by Enel Green Power in Addis Ababa, Ms. Songwe emphasized the need for big investors to work with locals if they are to make speedy progress in delivering clean renewable energy on the continent.

She said bankable utilities and regulatory and policy stability was also crucial for Africa’s energy transformation and development.

“Our countries need to have some sense of direction about where they want to go with their energy mixes. They also need good regulatory environments and predictability in the connectivity - the payments systems, and the scale of the countries’ demands going forward. So we need to put in place efficient utilities that work well,” said Ms. Songwe.

Financial Times Africa Editor, David Pilling, set the ball rolling by giving a backgrounder on the situation on the continent regarding access to electricity.

He said there were some lessons for Africa to learn from Asia in its quest to deliver electricity to its populace.

Africa, said Mr. Pilling, is the only continent of the world growing hence the need for more to be done to ensure millions who are off the electricity grid are connected.

“Access to electricity in Africa is low but rising quite fast but there is still a huge gap to make up,” he said, adding Africa was a young continent on the move much in need of clean energy to power its development aspirations.

Enel Green Power CEO, Antonio Cammisecra said; “As access to power in Sub-Saharan Africa lags behind. Renewables could be the best option to electrify the continent by using its immense potential in wind and solar resources.”

The 16th EnelFocusOn theme was Accelerating Access to Clean Energy in Africa.