Time-honoured tactics to the fore as I. Coast confronts dengue peril 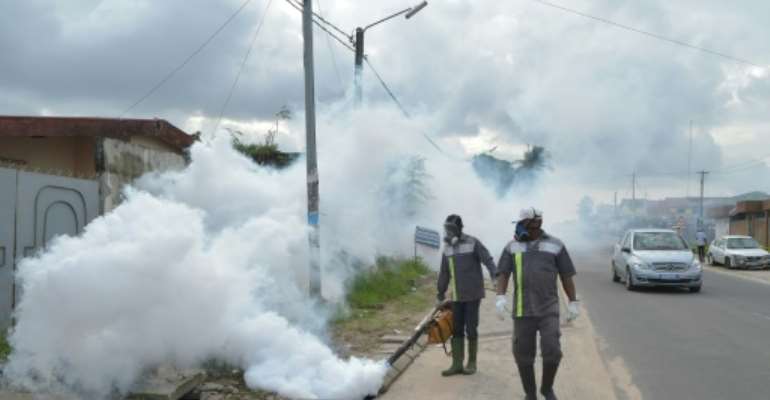 In Ivory Coast, the only way to fight dengue is to fight the mosquitoes that spread it, officials say. By SIA KAMBOU (AFP/File)

"Cover your goods," Diakaria Fofana, a doctor of public health, warns food vendors as a thick cloud of insecticide spray wafts down a street in Abidjan, Ivory Coast's economic capital.

Men in protective clothes, goggles and masks are disgorging plumes of mosquito-killing chemicals in a bid to roll back an outbreak of dengue.

Two people have died and 130 have fallen ill since the fever returned to the West African state last month.

The toll, so far, is tiny compared with other tropical countries, especially in Southeast Asia, where the painful and sometimes deadly disease is an entrenched peril.

But tackling the outbreak is a major challenge for Ivory Coast, a poor country that is having to resort to time-honoured, labour-intensive methods of spraying and neighbourhood awareness campaigns to prevent its spread.

Female mosquitoes carrying the dengue virus transfer the pathogen when they tuck into a blood meal from someone.

A vaccine does exist, but is not available in Ivory Coast because "it has many secondary effects (and) it's expensive"," explained Joseph Vroh Benie Bi, director of the National Institute for Public Hygiene (INHP).

Developed by French pharmaceutical group Sanofi Pasteur, the vaccine is recommended for use in people aged nine and older, and only for individuals who have already been infected.

Usually accompanied by flu-like symptoms, dengue makes some people very sick indeed, developing into a haemorrhagic fever that can cause difficulty breathing, heavy bleeding or even organ failure. While a first bout of dengue is rarely fatal, subsequent infections are usually worse.

The UN's World Health Organization (WHO) says there are up to 100 million cases of dengue worldwide every year, and almost half the world's population lives in countries where the disease is endemic.

It kills more than 20,000 people each year. Southeast Asia and the Western Pacific are the worst-hit areas.

There is no cure, and the WHO recommends that patients take paracetamol, rest and drinking plenty of fluids.

Five new vaccines are in development, but in the meantime Fofana says: "The only effective means of fighting (dengue) is fighting the mosquito."

In Ivory Coast, most recorded cases have occurred in Abidjan.

Health workers are striving to enlist the public in tackling the mosquito, targeting its life cycle.

"The larvae multiply in stagnant water, for example inside used tyres," said Fofana, deputy director of the vector control unit at the INHP.

"People should never store water in buckets in the open air and they should regularly throw out the water in plates under houseplants."

But he faces an uphill job in a sprawling port city of 4.4 million people in the middle of the rainy season.

What's more, people who are infected, even without knowing it, and can bring the virus to new areas when they are bitten by local mosquitoes.

The WHO has set a goal to halve the number of dengue deaths by 2020, but incidence of the disease has increased 30-fold in the last 50 years.

"Before 1970, only nine countries had experienced severe dengue epidemics. The disease is now endemic in more than 100 countries," it says.

In Ivory Coast, where malaria accounts for a third of all medical consultations, many people self-medicate when they experience symptoms such as high fever, vomiting, nausea or aches and pains.

Treating dengue with aspirin or ibuprofen can be dangerous, as these increase the risk of bleeding, according to the WHO.. By SIA KAMBOU (AFP/File)

"This is a real problem, because the symptoms of malaria, dengue, typhus and yellow fever are similar. Doing a blood test is absolutely indispensable," said Fofana.

Treatment with the wrong medicines can worsen the situation, he stressed -- aspirin or ibuprofen can increase the risk of bleeding, for example.

In the meantime, the spraying goes on.

"We know the risks," said Bamba Segbe, an Abidjan resident watching the masked men in action. "It's not for nothing that we call dengue malaria's big brother."