Interesting: The underwater Indian village that emerges once a year

A comprehensive story about Curdi Village
By Theophilus Quaicoe 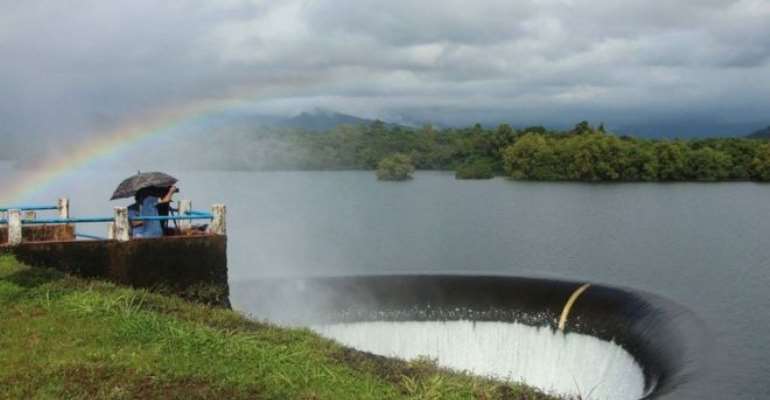 A village in the Western Indian State of Goa is seen once every year. However, it disappears underwater for the remaining 11 months.

The original residents of the village, who have currently settled elsewhere; come together to celebrate their home, when the water recedes, according to a Goa-based independent journalist, Supriya Vohra.

The construction of the state's first dam completely submerged the village. In 1986, the residents of the village thought it wasn't in existence any longer because of the dam.

Curdi was nestled between two hills in the Western Ghats with the Salaulim river - a tributary of one of the major rivers in Goa; running through it.

The water recedes every year in May to expose cracked earth, stumps of trees, eroded remnants of houses and religious structures, broken remains of household items, water canals in ruins, and miles of barren land criss-crossed with water bodies.

Curdi was once a thriving village in the hinterland

The land used to be very fertile, with a population of approximately 3,000. They tilled paddy fields surrounded by coconut, cashew, mango and jackfruit trees.

The village had the main temple, together with smaller temples, a chapel and a Muslim shrine. The renowned classical vocalist, Mogubai Kurdikar, was also born in Curdi.

Sadly, a drastic change ensued after Goa was liberated from the Portuguese in 1961.

One day, the chief minister, Dayanand Bandodkar, paid a visit to the village and informed them about the construction of the state's first dam. He disclosed to them how beneficial the dam was to everyone in southern Goa.

"He said it will drown our village, but our sacrifice will be for the greater good, " 75-year-old Gajanan Kurdikar, who has explicit memories of the meeting discloses. [irp]

More than 600 families, including Mr. Kurdikar, were forced to relocate to nearby villages, however, they were compensated and given a land.

The dam, also known as the Salaulim Irrigation Project, was built on the banks of the Salaulim river to provide water for drinking, irrigation and industrial purposes to most of the people in southern Goa. It was basically done to provide 400 million litres of water per day to citizens.

"When we came to the new village, we had absolutely nothing", Inacio Rodrigues, recalls. Inacio was amongst the first few families to relocate in 1982. They had to stay in makeshift homes until they could build their own houses. It took five years for some to get their permanent houses.

At age 10, Gurucharan Kurdikar and his family moved to a new village.

"I faintly remember my parents hurriedly putting everything in a pick-up truck. I was packed up in the track, along with my brother and grandmother. My parents followed us on their moped, the 42-year-old recalls.

"I think we were the last few families left. It rained heavily the night before, and the water from the fields started entering our house. We had to leave immediately. I couldn't even take my flour mill with me", Gurucharan's mother, Mamta, narrates the incidence clearer.

"The tap system did not come through to all the villages of South Goa as promised, so we do not get our drinking water from the dam", Gajanan Kurdikar says.

Curdi's original inhabitants visit their lost homeland when the water recedes in May.

The Hindus host a temple feast while the Christians gather for an annual Chapel feast during that month.

There are two large walls in Vaddam, a place where Mr. Kurdikar currently lives.

However, they're forced to depend on government tankers immediately the wells dry up in April and May, BBC News confirms.

"Today, it's very easy for us to pack up our bags and move. But for the people in Curdi, their identity was based on their land. They were closely and directly connected to it. That is perhaps why they remember it keenly and keep coming back to it", a Goa-based sociologist, Venisha Fernandes stipulates.