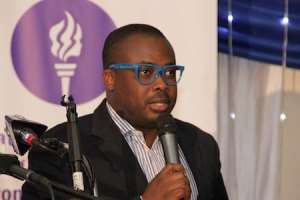 I couldn’t help but shrug my shoulders in utter disbelief when I watched Paul Adom Otchere's spiteful piece of documentary on Chairman Rawlings and the June 4 uprising. Was I surprised by the author’s lack of grasp on Ghana’s political developments? Absolutely not. In democratic Ghanaian politics, it is not unusual to see, and read, off-centered accounts from some political actors who exploit the generousity of free-expression to express their quaint views on socio-political matters.

Paul Adom-Otchere stated among other things in his documentary that, “June 4th was a regrettable event," and even went ahead to declare it as a non celebratable occasion in Ghana. In his never-ending wisdom, Paul Adom-Otchere mounted a sermon of vile propaganda against Chairman Rawlings for leading the 79 Revolution. He also accused Rawlings and his men of responsible for the massacre of thousands of Ghanaians with impunity.

I find Adom-Otchere’s account on the 79 uprising very interesting.

Many attempts have been made, in the past, to harm the reputation of Chairman Rawlings, all to no avail. They all failed. Didn’t they?

As part of his moral lectures, Paul Adom Otchere entreated Ghanaians to “say good-bye to June 4th, and that Ghana will not do this again." While I applaud him on his moral lectures, what has he done to bring justice to Ya-Na and the family of 40 others who were murdered in broad daylight under the watchful eyes of state security? In any event, why not do a similar documentary for the 1966 coup? Is it because it ushered in the political tradition the author belongs to?

How about one on how General Kotoka was killed? The Adom-Otcheres of this world cannot fight racism, and suborn sexism. They cannot preach moral virtues and enjoin earthly vices. As a nation, we cannot hound Chairman Rawlings like a fugitive and absolve a leadership under whose watch Ya-Na, Alhaji Mobilla and Ennin perished while the state turned its blind eye(s). The politics of see, hear, and speak no evil must stop for the greater good of our nation.

Let's even assume without admitting that Paul Adom Otchere's contrived tales are true, which they aren't, has he ever heard about the 'morality of murder'? He sure is too 'wise' to discern such a philosophy but what Paul and his enablers must come to accept is that the moral worth of an action is measured by the consequences of that action only by consequentialists such as himself. There is another school of thought which believes and endorses that the moral worth of an action should be measured by the purpose of that action. For some of us, June 4 is justifiable insofar as the purpose was good, and the people endorsed it. The price we had to pay collectively as a nation were just consequences, and we cannot allow those who disagree with June 4 to distort history and make a fetish out of the painful sacrifices of the revolution. Like every other revolution, the world over, June 4 was not without violence and sacrifice.

The French Revolution which began the process of political change in Europe, recorded thousands of casualties.

In 1789 thousands of ordinary people in France participated in a violent revolution. Over the next ten years they radically changed the way their country was governed and the structure of their society. The same can be said of the Iranian revolution, Cuban revolution, American revolution, Russian revolution and so forth and so on. And all these revolutions have shaped society in a number of powerful ways.

Can Adom-Otchere give us the names of the victims whose cause he has taken with such a strength of mind? If not, then the author, unfortunately, falls into the orbit of storytellers who lack the meta-analysis of history, yet play historians for the sake of partisan politics.

Rather than blame Chairman Rawlings solely for the execution of the Generals, the author should do some research on the mood of the Ghanaian public during the short duration of the June 4th Revolution. While the revolutionary leadership do bear some responsibility for the some of the excesses that went on during the revolution, the Ghanaian public was/is partially responsible for the execution of these military officers. While I am not an expert in punitive justice, to determine who gets what punishment, I am yet to see any Ghanaian who can beat his/her chest in denial that he/she did not support the revolution.

That said, one cannot also ignore the fact that, the Ghanaian army in the preceding years, and months, to the June 4th Revolution was in complete disarray. The incompetence of the executed generals was further manifested not only in the level of corruption in the country, but the lack of alertness on their part to suppress a back-to-back mutiny by junior military officers. How can we (en)trust our nation’s security with unskilled generals who sought refuge under their bed, and mango trees, when they heard martial songs played on the nation’s radio station? This was the appalling state of the Ghanaian military and the barefaced ineptitude of those at the helm of national affairs.

While the abduction and execution of Justices Cecilia Koranteng-Addo, Kwadwo Adjapong, Sarkodie, and a retired Army officer, Major Sam Acquah was a travesty, and I mourn their death to this day, Paul Adom Otchere should not also forget that the perpetrators of the crime were tried and executed by firing squad. If Paul has evidence to implicate Chairman Rawlings, whyfore wouldn't he exercise his civic responsibility and give the facts to the current government or the International Court of Justice? I thought Paul Adom Otchere is seeking justice. Isn’t he? After all, Chairman Rawlings is no longer a sitting president and can be hauled before our courts like any ordinary citizen.

Let it known to Paul Adom-Otchere that the decay in Ghana today calls for more events like June 4th to cleanse our country of the gross indiscipline going on in every aspect of our national lives.

June 4 1979 was a very liberating day. It was a moment of truth in the history of our nation. It punished social injustice and those who benefited from unbriddled corruption.

We cannot hail June 4th in 1979 and turn round and make a fetish out of the excesses today. Let's wise up and accept the fact that, June 4th is as relevant today as it was in 1979.

Every country has its own unique history but it's unfortunate Africa as a continent is progressively declining in telling its true stories. The shameful part is, when educated folks like Paul Adom-Otchere and his enablers are on this deceptive and parochial path.