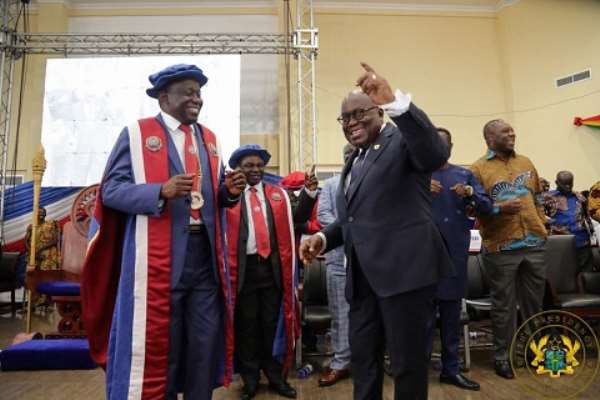 I now understand why it has become very difficult for disgraceful Alhassan Salifu Bawah to mount defence on your behalf or speak on the very matter which has become the subject of investigation by Ghana Audit service under the exclusive authority of the Auditor General pursuant to Section 16 of the Audit Service Act, 2000, (Act

For sometime now, UEW has been in the news not because of good initiatives but rather, acts that constitute criminality on the part of certain officers entrusted to manage the affairs of the university. "It is, therefore, not far fetched" to have these officers put before court for prosecution to deter others who might be tempted to repeat same in future.

Sir, your elevation as a PRO VC and subsequent promotion as UEW VC should have offered you the enabling avenue to showcase the outstanding doctrines of the Catholic church which you learnt during your days at the seminary but here we are, your appointment as UEW VC has rather brought the priesthood into disrepute, contempt and ridicule as a result of your vindictiveness and lack of respect for humanity.

Father, your office teamed up with some officers of UEW who were later appointed to serve on the disciplinary board to have some lecturers put before them for sanctions. It was evidently clear that, they had not done anything wrong for which reason they should be dismissed but your personal vendetta instigated the said unconstitutional move and got them sacked.

Later, the officers were reinstated because they were unlawfully and unjustifiably shown the exit for opposing certain decisions you took which weren't in the interest of the very taxpayer whose sweat the government uses to finance the university.

Sir, out of shame you failed to tender your resignation for plunging the university into chaos for such decision. One of the officers whose letter you signed to get him dismissed actually had your name wrongly spelt yet,you failed to cross check. The cassock purifies the soul and the body but your cassock is the opposite.

Sir, I have picked credible intelligence from UEW that, all the articles from Alhassan Bawah are those you write and put his name under for circulation in the media for reasons best known to you and your cassock. Come to think of it, why has Alhassan Bawah who was very vociferous during Avoke's debacle kept mute all these while on the GHC 5.7M scandal currently hanging on your neck as an albatross? A million dollar question.

Because you have never trusted your intelligence as a professor, you write, give same to Alhassan Bawah to put his name under for him to share. Alhassan Bawah "who has never been sensible enough" to reject this sacrilege also takes advantage of this duty to be mistakenly unpopular. Alhassan Bawah claims his father is a peasant farmer. The expression peasant farmer means" an unskilled person" who engages in farming.

Interestingly,when he is asked to put his name under those articles, he does that by putting his father's title under his name for everybody to know how unskilled his father is when it comes to farming. common sense should have reminded Alhassan Bawah that, it doesn't pay to be a peasant farmer.

Sir, you have been exposed and very soon, the law court would be your abode. With the little experience I had when I rendered my National Service with Ghana Audit Service when an item is expended, the law requires supporting documents as evidence of "DETAILS" of the actual expenditure. A genuine receipt must cover the expenditure with its accompanied Payment voucher for the purpose of Audit.

Now, let me take you through an item of expenditure couched as honorarium as part of the GHC 5.7M scandal. The question is, how do you get receipt for honorarium and how do you justify the said payment? I now understand why you are struggling to answer the Audit queries from the team of Auditors who gave you sleepless night when they stormed UEW campus.

Father, when other universities are spending lesser than the amount you expended in six weeks on capital expenditure to augment their intake, you are spending these huge sums of money on recurrent expenditure without justification. Your criminal prosecution which would soon hit this nation like a Tsunami is indeed imminent.

In the coming days, be prepared to have your name added to the list of cases the special prosecutor would soon be dealing with. I shall personally drag your "ass" there for you to feel the heat amidst the international embarrassment as the first Catholic priest to face Mr.Martin Alamisi Amidu in this regard.