Government Should Leave The Church Alone 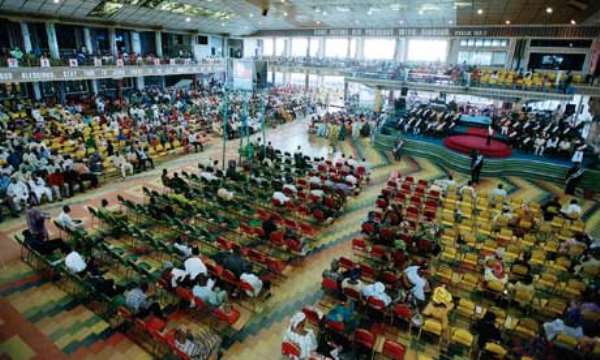 Fellow Ghanaians, if the doctor can't be arrested or dealt with by the law for cut opening somebody's skull to work on a tumor, a pastor who flogs a possessed body of a client to get rid of the devil, must not be charged for a crime because both the doctor and the pastors are professionals.

The intention of government to poke its nose in the affairs of the Church by regulating the way it operates could further escalate the ticking time bomb nature of our unemployment situation.

Whether commercial or counterfeit prophets, they must be allowed to operate irrespective of their modus operandi.

Pastors and clergies in general are professionals like their counterparts in law, and in the medical field.

According to Robert L. Herrick, the professionals must be understood as persons possessing "guilty knowledge". That is, a knowledge dangerous to know.

While the surgeon removes organs from living cells, the priest determines the Will of God. These are dangerous knowledge.

The issue of who then is a professional is a question begging for an answer.

Is a mechanic who knows how to repair a car's engine and fix brakes of vehicles can be said to possess guilty knowledge?

Because, his inability to fix brakes of a car can result in accident, just like the surgeon in the hospital performing surgery on patients.

Wilbert E. Moore attempts to classify all professions on a "scale of profession" from the more to the less set of works that should be qualified as professions.

The classical professions he noted are Medicine, Theology, and law. University teachers being the fourth professionals.

The criterion used for determining a professional whether a medical doctor, pastor, or lawyer, is based on their ability to meet complex human needs; having knowledge dangerous to know after going through intensive training, commissioned by society to work, and working under codes of ethics.

That is why the prospective doctors have their Hippocratic Oath; The Nurses have their Florence Nightingale's code, and the Hammurabi code in commerce.

Therefore, the medical practitioner having a guilty knowledge, commissioned by society to solve complex human needs is a professional.

What about the pastor?
Ordinarily, if you cut yourself or someone with a knife for whatever reason, it is a crime of an attempted suicide or murder punishable by law.

Doctors are allowed that latitude because of their possession.

Martin Luther and John Calvin in the sixteenth century laid the foundation of professions.

At the time, it was men of God who were regarded as being professionals with their 'divine calling" to guide mankind.

It was Martin Luther in particular who attempted to disabuse the minds of people to see and consider other workers like medical practitioners as professionals.

Fellow Ghanaians, if the activities of medical practitioners are not called upon to be regulated even as they mutilate bodies because of their possession, let nobody disturb their counterparts in the Theology who are equally addressing complex human needs spiritually that violates human rights.

Thus, the work of the surgeon, too, violates human rights. The reason that allows surgeons to operate must allow pastors to operate.

The concerns raised regarding pastors so-called weird activities in their attempt to operate on congregants in order to solve their needs, are rather lame.

Whether stamping on pregnancies, flogging people or fondling with the genitalia of a female congregant to cure her cramps, they are part of their job as professionals in Theology, just like amputating patients in the medical field.

In any case, should the surgeons' operational activities be regulated because they caused injuries to patients in the process of administering treatment?

Should doctors be regulated because they cut open stomachs to treat patients?

I don't think so.
Why would their counterparts in the Church be monitored and regulated because of their modus operandi?

There's no gainsaying that some pastors activities have been quite alien and a complete assault and insult to common sense.

However, if that is the only guaranteed way to meeting the need of their clients just like a doctor or a surgeon would cause harm to the body in order to remove a living organ such as the heart, what is wrong with that.

The criminal Act must be sensible here in dealing with professionals when they are doing their work.

After all, it is a mutual agreement between the pastors and their congregants who wish to be healed, just like a patient agreeing to have his arm amputated.

And for me, thieves who have been tasked by an owner of a property to come and steal it must not be punished. It wasn't burglary but a contract.

It is this same reason why I now personally don't see anything wrong with government constructing national cathedral or helping pilgrims to go to Makkah. If the government builds hospitals for doctors and patients, it must build cathedral for clergies and spiritual consumers.

They are both professionals. At least, for now.
Let me quickly throw in this before aspiring prostitutes ask government for a brothel simply because they serve "complex human needs" sexually.

The point I'm making is that pastors or clerics in general are professionals, according to Wilbert E. Moore, Martin Luther et al who laid the foundation of professions in the sixteenth century.

There's criterion of justifying professionals and their professions as I stated above.

Commercial sex workers may have their own set of 'guilty knowledge' and skills in order to tame an erected manhood, but certainly it does not require any intensive training to open one's legs to do that.

There is no code of ethics governing them neither are they being commissioned by society to operate nor possess any exceptional skills to operate.

The same thing applies to
other workers.
Therefore government must give pastors break.
Like President Paul Kagami did in Rwanda, government can set standard for men of God but their modus operandi is not government's business.

It will be a logical mistake and not prudent to waste our energies on non-issues like this to the neglect of real challenges of the country that are worthy of Ghanaians attention.

Let's tackle the real problems of our their nation such as corruption, shoddy works done by contractors, and the fact that our tertiary institutions continue to churn out "plenty" uneducated graduates.

Pastors raping of others' women to help them give birth must not be the priority of Parliament or government.