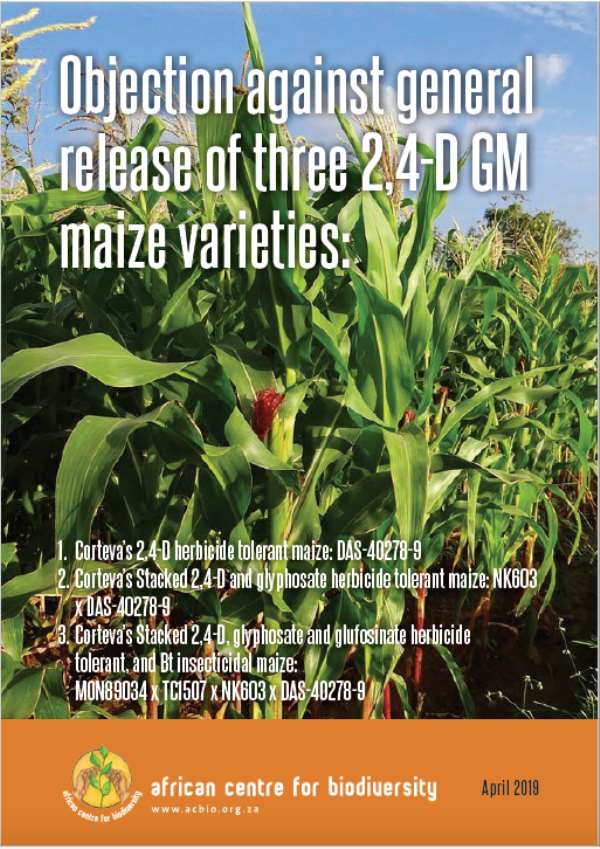 The African Centre for Biodiversity (ACB) has lodged a strenuous objection to three simultaneous applications by Corteva (previously Dow AgroSciences) for permits from the South African biosafety authorities to allow the commercial sale and cultivation of genetically modified (GM) maize seed resistant to the war chemical 2,4-D, as well as to glyphosate, glufosinate and quizalofop. due to grave concerns surrounding the biosafety risks they pose to human health and the environment.

These join a long line of applications for GMOs to be grown in, and imported into, South Africa. If approved, they will further entrench the current ecologically unsustainable and socially unjust industrial food system, reinforcing corporate capture, control, and consolidation and monopoly of our seed and food systems and pollute our food, bodies and lands with war chemicals.

If approved, South African farmers will for the first time be cultivating GM maize seed with 2,4-D, one of the two active ingredients in the monstrous war chemical Agent Orange . ACB’s objection is supported by the Pesticide Action Network North America (PANNA) , Community Alliance for Global Justice (CAGJ) , and National Family Farm Coalition (NFFC) – organisations based in the US, where 2,4-D GM crops have been approved. Numerous objections were also lodged by concerned South African citizens across the country pursuant to ACB’s social media posting reaching over 78 000 people and shared hundreds of times.

The ACB has a long history of opposing GMOs in South Africa and, in particular, GM maize associated with the war chemical 2,4-D. For the purposes of this objection, the ACB evaluated the non-confidential applications, risks assessment, and field trial data submitted by Corteva. According to Mariam Mayet, Director of the ACB: “We have found that Corteva has in fact presented data to show that the three GM varieties are outperformed by non-GM counterparts and thus present no potential benefits for South African farmers or consumers. Instead, these varieties present biosafety risks to farmers, consumers and the environment, serving to increase exposure to toxic herbicides and inadequately tested GM crops. Further, we have found that Corteva has made inaccurate and misleading claims in order to promote the commercialisation of these three GM maize varieties, and thereby is making a mockery of South Africa’s scientific and regulatory processes.”

We are urging the South African authorities to reject the approval of these GMOs based first, on a complete lack of evidence that they will improve yield, and second, that the applicant has attempted to mislead authorities with regards to how these varieties have performed to date in national trials.

Further, we are urging the rejection of these applications because all three GM varieties, by design, will increase 2,4-D use, raising serious concerns over increasing pollution of South African farming systems, the environment and the staple food supply with a chemical that has been associated with both human and environmental toxicity. 2,4-D has been linked to increases in birth abnormalities in high-use areas in the US and interference in male reproduction, particular in farm workers. It has also been shown that farm workers suffer higher rates of non-Hodgkin lymphoma (NHL), a cancer of the lymph node, as a result of 2,4-D exposure, in numerous studies across various countries. The herbicide was recently categorised as a Group 2B possible human carcinogen by the World Health Organisation’s Cancer arm, the International Agency for Research on Cancer (IARC). Studies demonstrate increases in oxidative stress in exposed maize farmers, which may be behind 2,4-D’s carcinogenic effects.

The stacked GM maize varieties will also be tolerant to glufosinate and/or glyphosate, resulting in crops that will be sprayed with a cocktail of pesticides, further increasing risks associated with their use.

A further concern is pesticide drift that can lead to damage of neighbouring farmers’ fields and wild plants. 2,4-D is a volatile herbicide and can thus travel over long distances and re-deposit itself on plants far from the site of application. It is responsible for crop damage in the US, according to two recent surveys by US state pesticide regulators. It is also active against most fruit and vegetables, making any drift a threat to the production of food crops and thus food security and farmer livelihoods.

In its risk assessment, Corteva makes the misleading claim of having conducted a “thorough environmental risk assessment.” However, we have found that Corteva failed to assess the full extent of risks posed by the three GM maize varieties. First, it does not take into account the ecotoxicological effects of its corresponding herbicides (either as single herbicides are in combination with Bt toxins), despite growing recognition that agricultural chemicals and industrial farming systems are a key factor that has promoted biodiversity loss. Second, it fails to present any data on potential effects on various parameters, such as non-target organisms, potential for gene transfer, or effects on biogeochemical processes.

Mayet explains further that an environmental impact assessment (EIA)has never been conducted for any GMO released in the South African environment because of the convoluted way in which EIAs for GMOs have been constructed in both the National Environmental Management Biodiversity Act (NEMBA) and the National Environmental Management Act (NEMA). Nevertheless, we have approached Minister Nomvula Mokonyane to trigger an EIA for these GMOs as she does have discretionary powers to call for these to be conducted, in terms of both laws, where GMOs may pose a risk to the environment. We have further requested Minister Mokonyane to order the biosafety authorities to desist from reviewing and approving these applications pending the outcome of the EIAs. We urge all South Africans to make similar appeals to the Minister to do the right thing, as the custodian of the country’s biodiversity.

The ACB firmly rejects the approval of the three varieties of GM maize to enter South Africa for general release. Ultimately, we are strongly urging our government to shift our agricultural and food policies towards offering holistic environmental and socially equitable solutions. GM industrial monoculture systems merely serve the purpose of producing profits for foreign multinationals