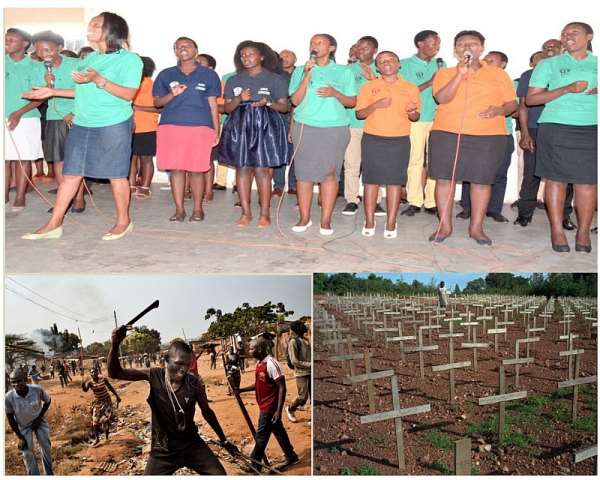 I actually stumbled into the ‘You Tube’ renditions of the Ambassadors of Christ choir of Rwanda. But truth be told, I was elated that I did. The sonorous voices in those recordings were simply amazing. They still are. Although I don’t understand or speak the Rwandan language, I haven’t stopped listening to those beautiful songs. I also happen to have recently watched the various video clips about Rwanda now widely circulating in the social media, and especially the capital Kigali, said to be the most decent city in modern Africa. And I shook my head in disbelief. Can the ghost of a country really come back to life? Can the ashes of a spent piece of wood still spark fire and generate warmth? Only in Africa, I suppose.

Anyone who never knew how far Rwanda came may never know the songs of pain and joy that still lurk in the bosoms of the Rwandan people. Although I never understood the wordings of this particular song they titled: “Ni Kwanini” and I had no one around to interpret them for me, yet the song moved me deeply when I saw the tears flow so freely down the cheeks of the young singers. I believed it was a reminder of those years of suffering, torture and bloodshed, all those wasted years that blind hatred and political immaturity hovered like a dark cloud over their country.

We are told that the Twa and Hutu people were the first to settle in Rwanda in the 14th century. They were later joined by the Tutsi who migrated from southern Ethiopian highlands and settled as cattle rearers. Soon afterwards, those who owned the greater number of cattle became known as the "Tutsi," and everyone else was called "Hutu." At this time, anybody could easily change classification from Hutu to Tutsi through marriage or cattle acquisition. The terms were applied somewhat flexibly. But when Germany colonized Rwanda in 1894, the terms "Tutsi" and "Hutu" took on racial dispensation. The Germans looked at the Rwandan people and convinced themselves the Tutsi had characteristics that made them look more like Europeans, such as being light skinned and tall. And on that account they put the Tutsi in positions of social authority.

The Belgians took over Rwanda when the Germans lost their colonies after the First World War and in 1933, they consolidated the categorization of the terms "Tutsi" and "Hutu" by making it mandatory for every citizen to possess an identification card that must label him or her as Tutsi, Hutu or Twa. Although the Tutsi constituted only about 15% of Rwanda's population and the Hutu nearly 85%, the Belgians, like their German counterparts left all the leadership positions in the hands of the Tutsi. The Hutu did not find that funny.

As a result, Belgium faced an uprising that was masterminded by the Hutu during Rwanda’s struggle for independence. The Belgians quickly swapped the status of the two groups and allowed the Hutu who constituted about 85% of Rwanda's population to be in charge of the new government. The Tutsi did not take lightly to the new deal. And so, the acrimony between the two groups began to hatch. Their hatred for each other ran into decades.

From the beginning of 1993, President Juvénal Habyarimana, a Hutu, presided over an autocratic government in Rwanda which prohibited the Tutsi from participating in governance. But the restriction was to change on 3 August 1993 when Habyarimana signed the Arusha Accord which loosened the Hutu stronghold on Rwanda and allowed the Tutsi to participate in governance. Again, this new turn of events greatly worried Hutu extremists.

On Wednesday, 6 April 1994, Hutu extremists began a mission of killing the Tutsi. As the brutal killings continued unabated, an unconcerned world stood by and just watched the massive killings of innocent men, women and children in Rwanda. At 8:30 p.m. on that fateful day, President Habyarimana of Rwanda was returning from a summit in Tanzania. A surface-to-air missile shot his plane over Kigali, Rwanda's capital city. Everyone on board was killed in the crash.

Although it was never determined who was actually responsible for the assassination, Hutu extremists took advantage of Habyarimana's death. Within 24 hours of the crash, Hutu extremists took over the government, blamed the Tutsi for the assassination and began to slaughter them. Spanning over 100 days, the Rwandan genocide left an estimated 800,000 Tutsi and moderate Hutu sympathizers dead.

The killings began in Kigali, Rwanda's capital. An anti-Tutsi youth organization mobilized by Hutu extremists set up roadblocks on the streets of Kigali. They checked identification cards and killed everyone who was Tutsi. Most of the killing was done with machetes, clubs or knives. Over the next few weeks, roadblocks were set up in many parts of Rwanda. On 7 April, Hutu extremists began to purge the government of political opponents. It meant that both Tutsi and Hutu moderates had to be killed. The prime minister was among them. And when ten Belgian United Nations peacekeepers tried to protect the prime minister, they were killed also.

Belgium began to withdraw its troops from Rwanda as a result of the murder of its citizens. Over the weeks, the violence spread. Since the government had the names and addresses of nearly every Tutsi living in Rwanda after all citizens had acquired identification cards that labeled them Tutsi, Hutu or Twa, the killers went from door to door, killing the Tutsi. Men, women and children were murdered, most of them with machetes or clubs. Many were painfully tortured before they were killed.

Thousands of Tutsi women were raped. Some were raped and then killed. Others were kept as sex slaves. Some Tutsi women and girls were tortured before they were killed. Some had their breasts cut off or sharp objects driven up their vagina. Thousands of Tutsi tried to escape the slaughter by hiding in churches, hospitals, schools and government offices. Unfortunately, these places which have been historically designated places of refuge were turned into places of mass murder during the Rwandan genocide.

According to Jennifer Rosenberg, a historian and freelance writer who researched on the Rwandan genocide, one of the most horrible of the massacres took place on 15 and 16 April 1994 at the Nyarubuye Roman Catholic Church, about 60 miles east of Kigali. The mayor of the town, a Hutu, had encouraged the Tutsi to seek refuge inside the church. He had assured them they would be safe there. Then the mayor betrayed them to Hutu extremists. The killing began with grenades and gunshots and then changed to machetes and clubs. The killers took shifts to kill. It took two days to kill the thousands of Tutsi who had hidden inside the church.

Similar massacres took place in many parts of Rwanda, with many of the worst ones happening between 11 April and the beginning of May 1994. To further demonize the Tutsi, Hutu extremists did not allow their dead bodies to be buried. They made sure their bodies were left where they were slaughtered to rot, exposed to the elements, eaten by rats and vultures. Many Tutsi bodies were thrown into rivers, lakes and streams apparently to “send the Tutsi back to Ethiopia", a reference to the fact or fiction, that the Tutsi were foreigners who migrated from Ethiopia.

The genocide ended when the Rwandan Patriotic Front (RPF) took over the country. The RPF was a well-trained military organization of the Tutsi who had been exiled years before, many of who lived in Uganda. The RPF was able to enter Rwanda and slowly take over the country. By mid-July 1994, when the RPF had taken full control of governance, the genocide was finally stopped. But the pains of remembering the atrocities might have to persist, if only to deter a future recurrence of foreign powers manipulating Africans to eat up themselves.

Tomorrow, Sunday the 7th of April, Rwanda will commemorate the 25th anniversary of the genocide in which at least 800,000 mainly Tutsi people were clubbed and macheted to death in a hundred days of brutal killings. Kagame, then 36, was a rebel general when he led the mainly Tutsi RPF into Kigali on July 4 and drove Hutu extremists out of the country. A quarter of a century on, Rwanda has now recovered economically but the trauma of the genocide which cast a long and dark shadow over the country is not yet lost on the people.

Tomorrow, as it has become the tradition every April 7 being the day the genocide began, President Paul Kagame will light a remembrance flame in the capital at the Kigali Genocide Memorial, where more than 250,000 victims were buried. It will mark the beginning of a week of commemoration activities and a hundred days of national mourning. In the afternoon, Kagame who has been in power ever since he led the rebels who chased the genocidal killers out of Rwanda will lead memorial commemorations at a ceremony at Kigali's main football stadium. This has been largely made possible by an international community that still feels pained by its inability to stop the genocide.

Kagame has been credited with being responsible for the rapid economic development in Rwanda after the genocide. His success has earned him the status of model leader. However, over the years, his draconian rule, needed to impose order out of chaos, gained him many critics. Kagame's despotism as seen by the Western world was in his gagging the freedom of expression and stifling opposition.

But obviously time and tide are changing. Kagame, now 61, has begun to loosen his tight fisted grip over government, perhaps concerned about what would possibly happen to his country when he eventually relinquishes power. So, he has released some jailed opposition leaders. Kagame certainly has seen the wisdom of shedding off the old narrative of being autocratic and intolerant of opposition. He is becoming more concerned about the legacy he wants to leave behind. The ruling party is no longer intolerant to opposing views. Over a period of time they have started listening to other views. Opposition manifestos are now being considered in government projects, unlike before, when they were completely ignored.

When I watched the Ambassadors of Christ Choir sing “Ni Kwanini,” it reminded me of my own original country, Nigeria. I remembered the close to three million Biafran men, women and children who were mercilessly slaughtered by the Nigeria armed forces in three years of brutal fratricidal war, the millions that were deliberately starved to death. Nearly 50 years have flitted by and yet the echoes of the marginalization and the injustices that caused the civil war still persist. And I wonder. Will citizens of that country ever come together as brothers and sisters of an African family again? Can the Hausa, Igbo and Yoruba ever sink their differences as the Tutsi and Hutu did, come together, make their peace and together build Nigeria up and give it the befitting place it deserves in the comity of nations? Or must Nigeria’s rulers continue to be that gang of insatiable money bags who keep on acquiring money and more money and more money from government coffers while their kith and kin die of hunger and starvation?

Several African leaders are expected at the ceremony in Kigali tomorrow. The leaders of Nigeria will definitely be there, and probably go home learning nothing. It is not in the nature of Nigerian politicians to learn from other countries, according to the leader of the ruling All Progressives Congress, Alhaji Ahmed Tinubu. Belgium will be sending Prime Minister Charles Michel. French President Emmanuel Macron will not be attending. France, which Rwanda accuses of being a party in the genocide, will be sending Herve Berville, a 29-year old Rwandan-born Member of Parliament in Paris. Taking back his message to Macron, he too will be expected to be one of the ambassadors of Christ as Rwandans painfully remember their days of blind hatred.

Asinugo is a London-based journalist, author of ‘The Presidential Years – From Dr. Jonathan to Gen. Buhari’ (Vol. 1 & 2) and publisher of Imo State Business Link Magazine (imostateblm.com).