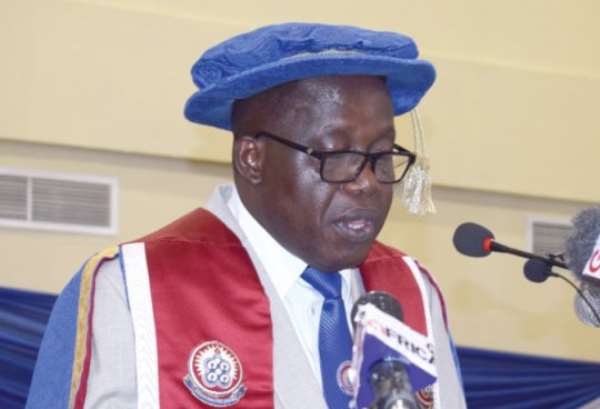 Hmm! there is a continuous shake in the underground but the house stands still. Everyone seem to make it move but to no avail. The silence of Prof Afful-Broni is something one can admire. Despite the seemly disaster ravaging on the university ground, the V-C still stands unshaken and still choose the culture of silence. Hmm! this is wonderful. Does his keeping silent suggest that he has everything under control? I believe everyone is expecting the day the VC of UEW will break the silence.

UTAGH have forced him to speak when they called for his step down. He chose silence as the right part. Here, his character is like his master Jesus Christ who chose on many occasions to keep silent under the heavy cross. SRC of the university also spoke and people were expecting that the VC responses. Yet, he gave a great silence.

What actually will make Afful-Broni speak? Is it he going to parliament? I doubt. The minority in parliament have called him to resign but he has not responded to their earnest request. As we all can guess, he is silent. They have called on the Pope of the Roman Catholic Church to speak to him. But will this work? First, who are they to call on the Holy Father to talk to the VC? Perhaps they are thinking that the Pope has time for things such as this. The minority in parliament are expecting response to their request. Will the Pope also give a silent response?

What if his archbishop speaks to him? Could his Archbishop Charles make him speak? Why would everyone want his resignation? Could it be that he has begun closing some leakages? Could his call for resignation by some students and lecturers be as a result of some academic immoralities he has put a stop to? You and I know that sometimes, some students bribe their lectures to get the mark in exams? Could it be that as a priest, he has uncovered this act and so those involved think he is taking their daily bread from their mouth? Could it be also that because some lecturers and students think they can manipulate the system again with the presence of a priest and that should warrant his resignation for not achieving it or having not achieved their aim?

When members fight for a leader whom they can manipulate, they only fight for a damning society which can never see growth and development. But till Afful-Broni speaks, let us all keep silent.