Road Carnage In Ghana, A Result Of Greedy Leadership 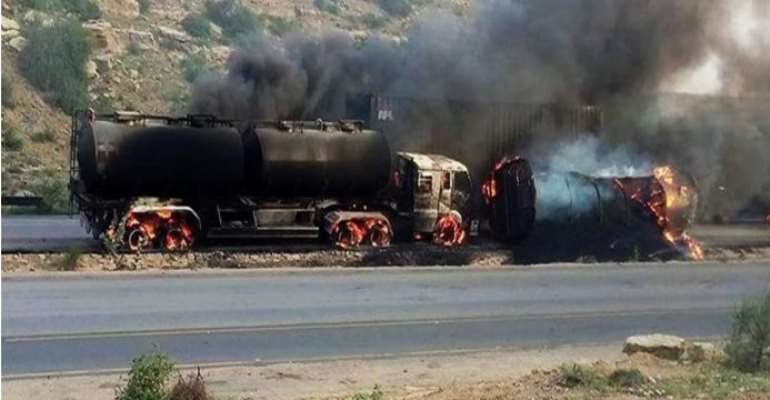 Folks, those of us who have watched "The Panama Papers" documentary may find sufficient proof that the majority of our leaders don't mean well for us.

In fact, they are only self-seeking, self-serving, self-perpetuating, and self-aggrandizing cabals to paraphrase Professor Gympo of University of Ghana (Department of Political Science).

Prime Ministers, Presidents, and a majority of other government officials in that documentary exposed for gargantuan corruption beyond one's wildest imagination.

For example, according to findings by Global Financial Integrity, crimes, corruption, and tax evasion drained 946.7 billion dollars in developing countries in 2011 alone including Ghana in the list!

How much public fund had been diverted into private pockets through "create-loot-and-share" in Ghana was not explicitly stated, however, the skyrocketing of the National debt stock without anything tangible to point it is enough evidence to note that colossal amount of our collective treasury has been stolen since independence.

Politics as a means to improve the lives of the masses has become the largest incubator of corruption, hence our perpetual underdevelopment.

It is tearfully painful to realize that our leaders only embark upon projects that they really can use as a vehicle to siphon money from our national kitty to elongate their pockets.

As a result, nebulous contracts and ghost projects are littered everywhere in our political landscape with their accompanying reckless commissioning.

This explains why since independence, no wise government has thought of bridging the South and the North with a railway system of travel that the poor who are in their masses can afford to escape premature and untimely deaths on our roads.

For how long should we continue to be sacrificed by our leaders for their stomachs agendas?

For how long would governments' responses to carnage on our roads be only condolences to victims of this scariest "vehicular genocide" of the poor?

Barely three weeks ago, KNUST Students' Parliament House (KSPH) of which I am a proud member, paid a courtesy call on the longest-serving former President JJ Rawlings. We also visited the nation's House of Legislature, and subsequently stormed the premier campus (University of Ghana) to shut it down with a debate between us and our colleague Honourable Members of that university students' Parliament on a joint sitting.

The AGENDA FOR THE JOINT SITTING proposed by our colleagues at UG was rather controversial and interesting: "Ghana’s 62 years of total political independence; a milestone of development other than retrogression".

Being the guest Parliament at UG, KNUST was to serve as Minority and against the bone of contention in the House so that our host could support the motion as Majority.

None of us from either side of the House allowed the other to make headway with their argument. Finally, we had to adjourn the sitting without a winner.

Our colleagues argued beautifully that Ghana has made a milestone of development since independence citing, for instance, KNUST attainment of university status, the roads that were previously rats paths are now tarred, and they mentioned a lot of others.

However, we KNUST on the other side of the House insisted Ghana hasn't even attained any total political independence let alone making any milestone of development.

We pointed out that maintenance of State institutions brought by the colonial masters alone is a palpable reality that we didn't attain any total political independence. Our state institutions remain as colonial relics, and until recently when President Akufu Addo changed the name of our seat of government, it was an embodiment of imperialism with its name as Flagstaff House.

In 2016, His Excellency, the Vice President Dr. Mahmoud Bawumia, in one of his lectures made an excellent argument, comparing the alleged peculiar mess economic performance of the Mahama administration to a farmer who after farming cannot boast of bumper harvest but boasting of the number of fertilizer bags he used with a little harvest.

In fact, I always maintain that anybody who says Ghana has made a progress, and not a retrogress since independence, is an enemy to the State and perhaps be charged with treason.

Ghana took off with countries like Malaysia, Singapore, South Korea and other than developing countries in the 1960s.

As a matter of fact, Ghana was better than some of these countries and on the same wavelength with others!

However, our own "drivers" unbeknownst to us, were political green-eyed monsters, and instead of forward, they journeyed backward in pursuance of their selfish interests.

For us (KNUST Students' Parliament House), our argument was simple.

Like a farmer who brags of the numerous fertilizer bags he used with little harvest, we asked our colleagues if development, according to Paul Streeten, must be redefined as an attack on the chief evils of the world such as malnutrition, diseases, carnage on roads as a result of narrow roads with insufficient width, corruption, and neo-colonization, all of which are peculiar to Ghana after 62 years, how on earth should we brag of milestone of development as a nation?

We didn't miss the opportunity to ask our colleagues whether Ghana after sixty-two years is still a developing country or otherwise.

Our follow up argument was whether a sixty two (62) years Primary 1 pupil who started schooling with his colleagues (Ghana and its peers like South Korea etc.) with a dream to become Medical practitioners (similar to development) who (Ghana's peers) are now pensioners today having achieved their dreams (attainment of development), can boast of 'milestone of development or retrogression" after 62 years?

Why did Ghana's peers as enumerated above able to take-off and subsequently develop and yet we are still languishing in the anguish of avoidable accidents of vehicular crashes head-to-head in 21st century?

Is it not interesting that since independence, 62 years ago, the leadership, both military and civilian, have not been able to link the North to the South with railway, yet ballooned our debt stock to a Godforsaken amount?

What is the money we have been borrowing used for?

Can't any government prioritize the precious lives of Ghanaians, at least for the sake of votes, by borrowing as usual to construct railways and shifting the by road to by railways?

Your guess may be as good as mine why they keep on piling our debt stock in our name and refuse to salvage Ghanaians from the piecing of colliding vehicles' disintegrating irons.

Our leaders have been unable to do that, because of outright avarice.

Finding gold in public office, what they earn through create-loot-and-share for constructing a six class room block at an over inflated cost of "five hundred and ninety thousand Ghana cedis", such an amount can't be realized in genuine projects like the construction of railways!

What a crying shame!

Why would an opposition party pray for the failure of a party in government so that the people can see them as a credible alternative government, if not for their stinking interest?

The more I try to see the Akufu Addo administration as incompetent that only wastes public resources like the previous governments, the more I am convinced by nature that they are the right people at the right time to serve Ghanaians need.

The government may have engaged itself in frivolous activities that doesn't matter like construction of National Cathedral, Free Senior High, unnecessary creation of ministries etc. for now, if President Akufu Addo listens to the masses and changes his style of leadership, he might salvage Ghana from self inflicted atrocities.

Although I don't blame them for their concentration on frivolous projects.

If you have a country which citizens are behaving like an over pampered child that has misplaced a favorite candid, that's how their leaders treat them.

Today, anybody who misplaces his or her shop keys is calling on government to find them.

Communities that abandon toilet facilities provided by government and engaged in open defecation in Ghana are really calling on government to help collect their feces heaped.

If somebody's sheep couldn't come back home, government must find them!

If a woman rejects a Ghanaian proposal, he is calling government to soften the hearts and behaviors of women.

Many Ghanaians ventilate their relationship problems on government.

How is government going to concentrate on the day-to-day governmental activities that really matter?

May God Strengthen our leaders and give them the ability to resist all forms of temptations of power so as to serve Ghanaians dispassionately and incorruptibly.

The writer is a student at KNUST, Department of Religious Studies.