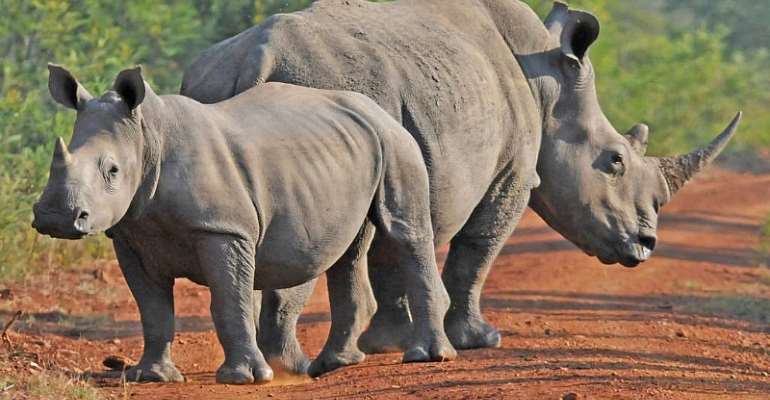 Seven Chinese nationals are facing trial in the northern resort town of Hwange, in Zimbabwe. They are charged with money laundering and unlawful possession of rhino horn.

They were arrested in December with more than 20 kg of horn pieces worth nearly 1 million US dollars.

Acting on a tip-off, police detectives found the rhino horn stashed in a mattress, plastic bags and in boxes at a house in the town of Victoria Falls.

TRAFFIC – a conservation organisation specialising in wildlife trade issues based in Cambridge, UK – says three rhinos are poached every day just in South-Africa, home to nearly 80 percent of African rhinos.

But there is tiny glimmer of hope, says Dr Richard Thomas, a spokesman for TRAFFIC, as South Africa announced in February that the number of rhinos killed in 2018 dropped to 769 from 1,028 killed in 2017.

“We shouldn't be complacent about this,” remarks Dr Thomas. “One reason that fewer animals were poached last year is presumably the result of there being actually fewer animals to poach. So we're far from being out of the woods yet.”

Asian demand for rhino horn drives the poaching crisis. Vietnam and China are the top consumer markets for the product. However, Dr Thomas says the dynamics of rhino horn trade is changing.

“One worrying development is that we are seeing more engagement and interest in rhino horn from Chinese consumers with Chinese nationals behind criminal gangs. On the other hand, the demand in Vietnam is beginning to wane,” he explains.

TRAFFIC uncovered evidence of rhino horn being transformed in South Africa into objects such as beads and bracelets to be smuggled to China. These products make it even harder for customs and other law enforcements agencies in Africa to detect the smuggled rhino horn.

In Vietnam, however, consumers tend to use it for different purposes. Wealthy businessmen, according to TRAFFIC, will use rhino horn as a means to cure hangovers, to detoxify and for other unfounded medicinal properties.

“Really it is a way of showing off their wealth, that they can afford this fabulously expensive product,” says Thomas.

He says that campaigns to change the behavior of consumers of illegal wildlife products are beginning to show encouraging results.

“Basically, [it means] persuading people that using rhino horn is not a cool thing to do. There is some indication that it is having an impact in Vietnam but it's a long process. It's ingrained in people's mind and culture. You're simply not going to get a shift overnight. It will take years,” he declares.

Rhino horn trade is a very lucrative business as the horn can fetch up to $60,000 dollars per kilogram.

“They are extremely well organised. They have sophisticated procurement and distribution method to ensure they get horn from Africa to Asia," says Dr Thomas. “The other major factor is that wildlife crime is often perceived as a high reward/low risk crime. If they are caught, they may get a small slap on the wrist.”

According to TRAFFIC, the organised criminal gangs are directed by kingpins based in Asia with African nationals carrying out local operations such as poaching.

In 2018, South Africa allowed local sale of rhino horn in order to better protect its rhino population from poaching.

“It's never been disclosed how much was actually sold domestically but indications show it is not a lot,” declares Thomas.

He believes that better equipped enforcement agencies to improve patrolling on the ground are among the measures needed to better fight rhino horn poaching.

“We need to improve the collection of crime scene data,” explains Dr Thomas. “Forensics have been stepped up. A data base has been established with rhino genetics so that we know where animals are poached.”

He also believes that the judiciary should be strengthened. Money laundering is a downstream activity of the trafficking because it generates large sums of money.

“There's been a big move to follow the money and pursue the criminal elements by looking at financial flows and tracking them down that way,” says Dr Thomas.