The Time To Invest In Africa Is Now – Bawumia 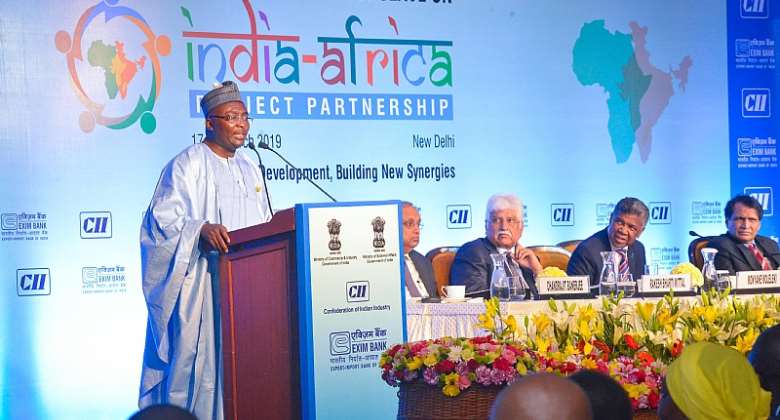 The Vice President Dr Mahamudu Bawumia, has challenged investors to constructively engage their African counterparts as the governments and peoples of the continent gear up to take their destinies in their own hands and assume their rightful places in the comity of nations.

According to Dr Bawumia, “Africa is on the move; a continent eager to shake off past failures due to blind colonial and cold-war alignments and sheer bad governance. The new scramble for Africa, according to the Economist Magazine, is now being led by a new generation of Africans determined to make a difference through technological innovations and the development of enterprise and markets.

“The Africa we want can only be built by Africans in partnerships with countries and investors who also believe in this paradigm for change.”

The three day Conclave, under the theme “Partners in Development, Building New Synergies,” and organised by the Confederation of Indian Industry (CII) in collaboration with the Export-Import (EXIM) Bank of India, is bringing together over 500 delegates including 33 Ministers and Heads of Government from 41 African countries.

Over the past 13 editions, the CII- EXIM Bank Conclave on India Africa Project Partnership has emerged as the pioneer event for Indian and African governments and industry to meet and explore new avenues of partnerships, and enables the Indian and African leadership to take stock of the progress of the partnership and address future needs.

Outlining a number of areas which would make an investment in Africa an attractive proposition, Vice President Bawumia urged participants to “Let our conversation about the future move outside old boxes of doing business, and old government-business engagements”.

“Africa’s emerging markets offer great opportunities for economic growth and prosperity with over 1.2 billion people and a combined GDP of US$2.24 trillion. It is the world’s second largest and second most populous continent, and by 2050 will be the most populous continent in the world with an estimated GDP of $29 trillion. The continent is endowed with natural resources which, with the right complementary factors, can be leveraged for accelerated and inclusive economic growth.

“Africa is home to ten of the world’s fifteen fastest-growing economies and this growth rate is expected to boost consumer spending from USD 860 billion in 2008 to more than USD 1.3 trillion by 2020,” the Vice President stated.

The leaders of the continent, Vice President Bawumia indicated, had already initiated moves designed to make trading on the continent less cumbersome with the declaration of the African Union’s Agenda 2063, the continental body’s long-term vision for an integrated and prosperous continent

“Considering the significance of free movement of goods, services and persons across borders to socio economic development, the Single African Air Transport Market (SAATM), a Flagship project of the African Union Agenda 2063, was launched to create a single market for Air transport in Africa. This is to allow significant freedom of air transport in Africa.

“On 21st March 2018, in the Rwandan capital, Kigali, the President of the Republic of Ghana, H.E. Nana Addo Dankwa Akufo-Addo, and other African leaders had the pleasure of signing the Agreement establishing the African continental Free Trade Area, (AfCFTA).

“It is in this context that I encourage the relevant public officials from Ghana and India to engage in discussions that can open doors for business to business cooperation and mutually beneficial partnership engagements. This is a sure way for our two sides to explore the economic opportunities that abound in Africa and India.”

“Together, let us push hard so we can improve the lives of ordinary citizens in India and Africa so that they too will realize that these industry conversations are also beneficial to them in the long run.”