NPP militia training centre uncovered in the capital
By Analimbey, A. Chris 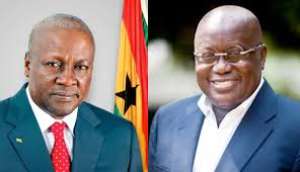 Former President of the Republic of Ghana, flagbearer and leader of the National Democratic Congress (NDC) has thrown tantrums at President Akufo-Addo, claiming he is doing everything within his power to paint the country black by deliberately harboring criminal militias, De Eye-Group, a pro-New Patriotic Party (NPP) militias at the former seat of government, the Osu Castle.

The former president who recently came under attack by some section of Ghanaians for his ‘boot-for-boot’ comment following the Ayawaso West Wuogon by-election violence, where some members alleged to be sympathizers of the NDC were brutalized in a broad day-light, took to his twitter handle to vent out his frustration and disappointment.

According to Mr. Mahama, I have “watched a harrowing expose of how the Osu Castle, until 2013 the office of the president, now used as an Annex, has become the Head Quarters and training camp of a private militia wing of the NPP and President Akufo-Addo. Clearly, this administration has produced enough paint to paint the whole nation black.” – He claims.

On Thursday, 7th of March Joy News showed an investigative piece by its Investigative Reporter, Manasseh Azure Awuni, where a criminal militia group associated with the governing NPP was being trained at an important state facility classified as a security zone. The group has been meeting at the facility for close to two years.

At a time that the country is waiting on the NPP and the NDC to take decisive action on operations of their militia groups, JOY NEWS head of investigative desk, Manasseh Azure Awuni went undercover to expose the activities of De-Eye Group, its operations and its link to the NPP.

More trouble for Weija residents as more volumes yet to be s...
29 minutes ago