Nana Akufo Addo, A Dictator In Disguise?
By Joel Savage 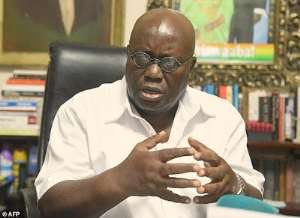 In regards to what I have read so far in foreign newspapers about Nana Akufo Addo’s government, one doesn’t need to be a political analyst to evaluate the political situation now in Ghana.

Frankly speaking, if there is going to be genuine or free and fair elections in Ghana, despite the many mistakes John Mahama did, he has the chance to become the next president of Ghana, after Nana Akufo Addo. That means Nana Addo hasn't any chance to complete his second term of office.

I am not writing this article because of the chaotic political events in the country but what some Ghanaians in the Diaspora and foreign newspapers are saying about Nana Akufo Addo's government. Some developed countries have generally viewed the failure and scandals involving Akufo Addo’s government.

One article reads, “obedience is better than sacrifice,” probably Nana Addo dreams of the forgiveness of his sins by God because presidents in Africa are deeply corrupt that he needs a favour from God. In this 21st century, no leader in his right mind builds a Cathedral.

In another development, people have criticized Nana Akufo Addo for changing the names of institutions named by Kwame Nkrumah for ages. His actions mean he is a leader who has instincts of a dictator because dictators often do that to seek self-recognition.

For these reasons, according to many publications Nana Akufo Addo will lose the chance to serve his second term but being a ‘crook’ he will force his way to declare victory in favour of his party and definitely, if such a thing occurs in Ghana, God only knows what will follow.