Joan Of Arch Of Ghana Hockey
By Akosua Tuntum Nahana 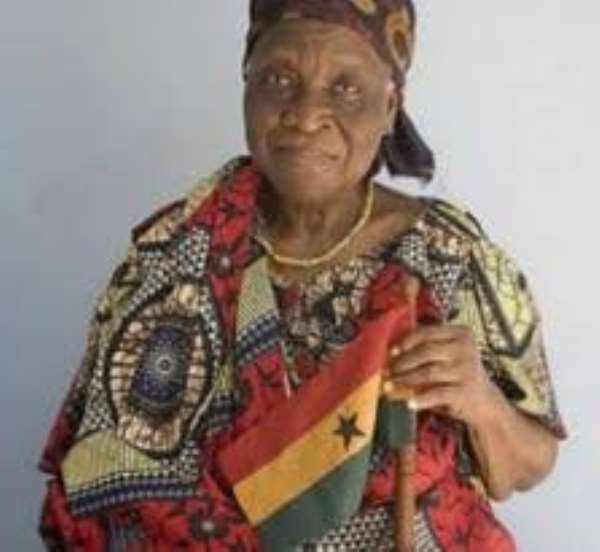 For Modern Ghana reader Awuradebasa who suggested this feature.

"I decided on the three colors of red, gold and green because of the geography of Ghana. Ghana lies in the tropics and blessed with rich vegetation. The color Gold was influenced by the mineral rich nature of our lands and Red commemorates those who died or worked for the country’s independence. Then the five-pointed lone star which is the symbol of African emancipation and unity in the struggle against colonialism…." ( Theodosia Okoh)

Theodosia Salome Abena Kumea Asihene ( Abena Kumea) was born the eight child of her parents, on 13 June 1922, in Effiduase, in the Gold Coast. Her father was reverend Emmanuel Victor Asihene( former moderator of the Presbyterian Church of Ghana) and her mother was Madam Dora Asihene. Both her parents are from Anum in the Asuogyaman district of the Eastern Region.

Enoch Kwabena Okoh the Head of Civil Service in the Kwame Nkrumah's regime was Abena Kumea's husband. Together they had three children.

Kwame Nkrumah chose her design out of those submitted, for the national flag of Ghana. Her design has been Ghana's flag design since 6 march 1957.

Abena Kumea was the first female chairman of the Ghana Hockey Association, after the President of the Ghana Hockey Federation for more than 20 years. In her time Ghana first qualified for both the Hockey World Cup and Olympic Games. Ohene Djan called her " the Joan of Arc of Ghana hockey " she rose to the occasion to save Ghana hockey... men were faltering and vacillating about the development of the game." The national hockey stadium was named after her in 2004. She was also a patron of the Ghana sports writers Association of Ghana.

Abena Kumea was awarded the Grand Medal ( GN), the Ghana Broadcasting Corporation gave her a citation, so did the National Sports Awards in 2004, she also had an award from the Sports Writers' Association of Ghana and the TV Africa series Obama Mbo also awarded her an award.

Abena Kumea died on 19 April 2015 in Narh- Bita Hospital in Tema at the age of 92. Former president John Dramani Mahama directed all flags should fly for three days from 21 April 2015 in her honour. Did you know the name of this talented Ghanaian who contributed so much to our country ?

Sack all underperforming security personnel – CFF Ghana to A...
1 minute ago