Kpembewura’s Punishment: Killing A Fly With A Sledgehammer 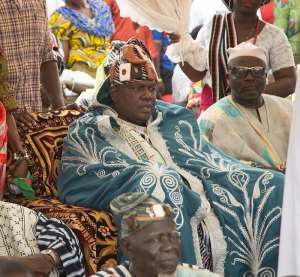 The Gonja Traditional Council during an extraordinary meeting held in Damongo, on Thursday, February 21, 2019, deliberated on the inauguration of the newly created Savannah region and the unfortunate incident that happened in Salaga after the declaration of Damongo as the Savannah regional capital.

Indeed, it did not come to me as a surprise, that the Council made the unfortunate incident an item on its agenda for discussion. As I indicated in my earlier article titled, “Savannah Region: Developing Salaga, Our Utmost Priority”, “Lamentation and violence will only give the whole of the Savannah Region and Salaga in particular bad publicity (as it has, so far) and set us back even before we set off.

Consequently, the destruction of the NPP’s constituency party office yesterday by some youth of Salaga as a reaction to the President’s announcement of Damongo as the Savannah regional capital was most regrettable and condemnable. As citizens of Salaga, we have every right to feel devastated and angry. Nevertheless, I urge all of us to express our disagreement incivility. Violence and Vandalism is never the way to go.”

Likewise, the Council after its deliberations condemned the lawless act, and rightly so, in no uncertain terms. Accordingly, as a responsible leader, the Kpembewura, Haruna Dari Bismark Banbange II took ultimate responsibility for the action of the perpetrators, as it happened within his Traditional jurisdiction.

He therefore unreservedly apologized to the Yagbonwura and the Gonja Traditional Council for the boisterous behaviour of the youth. Just as He did to the President personally and through a press release, which was widely carried by the media.

As a matter of fact, those close to the Kpembewura will attest to his revulsion for indiscipline and lawlessness. It is also a fact that, the leadership displayed by the Kpembewura whilst he was still in Accra during the regrettable incident reduced tensions and limited the unfortunate incident to just the NPP Constituency party office.

Additionally, the Council took a decision to apologise to the President through a press release and also send a delegation to be led by the National Chief Imam to the President for the same purpose.

Curiously, the Council went beyond the above actions to fine the Kpembuwura GH₵2,000, two (2) Cows and in addition charged him to fund the trip of more than Twelve-member delegation of the Gonja Traditional Council to the Jubilee House to apologise to His Excellency, President Nana Addo Dankwa Akufo-Addo.

More bizarre, was even the thought of charging the Kpembewura again to foot the bill for the renovation of the torched NPP Constituency Office, which was rightly shot down by some members of the Council before it could even fly.

The Kpembewura regrettably accepted and promised to pay all the unreasonable and unfair penalties he was slapped with. Indeed, the punishment is not just outrageous and ruthless but discriminating. Has there been any precedent to this? What is the motivation for this outlandish punishment?

On Monday, August 31, 2015 the NDC youth of Damongo and Busuno vandalized the NDC Constituency Office and the then Northern Regional Minister’s campaign office in Damongo and under the nose of the Gonja Traditional Council. Which Chief was fined for this act of vandalism?

In fact, there are abundant instances where the actions of some individuals, groups and even Chiefs have brought and continue to bring the image of the Gonja Traditional Area into serious disrepute. In none of those instances, we find in the media space was any Chief made to pay such huge penalties.

Again, how many Chiefs took responsibility and were accordingly punished by the Gonja Traditional Council for the litany of violence and destruction of property by youth within their traditional areas? Who was punished for the numerous Chieftaincy disputes that rocked our traditional area? Or the innocent lives lost and the properties destroyed are not as important as a party office? How many Council meetings were convened for any of those acts of vandalism and violence in the other Traditional Areas?

Or is it a case of what George Orwell depicted in “Animal Farm” as “All animals are equal but some animals are more equal than others”?

In all honesty, the Gonja Traditional Council must respectfully reexamine the punishment slapped on the Kpembewura and review same. Otherwise, it is only fair that the gander demands the same treatment offered the goose. Consequently, we will critically monitor the work of the Council to ensure that the brush used to paint the Kpembewura is applied to the other Paramount Chiefs whose actions and that of their subjects disgraced and continue to drag the name of our Traditional area into the mad.

Posterity, in this case, is the best Judge.