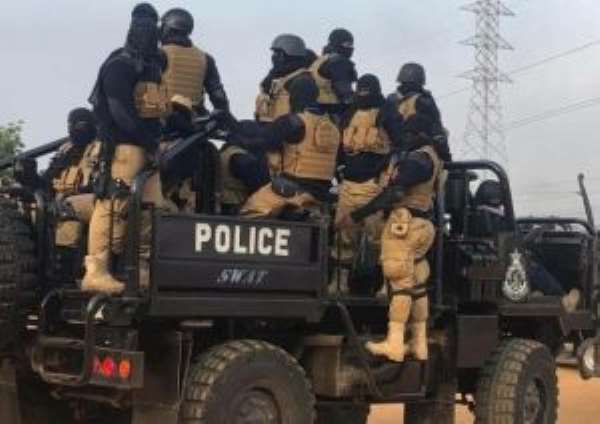 The issue of a political party (elected to govern our nation for four years in what is a constitutional democracy), surreptitiously turning it's private party militias into state-sponsored paramilitary forces, is a very grave matter. It is a grave matter, precisely because arming a private militia, to transform it into a state-sponsored paramilitary force, borders on treason, under the 1992 Constitution.

An alarming, and egregiously-violent manifestation, of the dire consequences of the formation of state-sponsored private armed militias - which are clearly unaccountable to even the leadership of the nation's security agencies - was seen in a viral video clip, watched by millions around the globe, during the recent by-election at the Ayawaso West Wuogon constituency.

Many who saw that viral video clip, reacted with revulsion to the scenes of gratuitous violence, which they witnessed - horrified by the display of impunity shown by a number of balaclava-clad thugs-in-uniform, assaulting innocent people, in an area in a constituency in which a by-election was taking place.

For many who watched that viral video clip, it was hard to believe that the barbaric scenes they were witnessing, actually occurred in Ghana. That revulsion arose from the fact that many around the world regard Ghana as a civilised nation, and stable African democracy, which is justly held up to the world as a model democracy, in a continent in which over the years, violence during elections have resulted in the destabilisation of many nations.

The more responsible sections of the Ghanaian media must reject the subtle attempt to lessen the gravity of what is a very dangerous development, and most shameful occurrence, by labelling what is a political party's own private militias, which have morphed into state-sponsored paramilitary forces, as vigilante groups. They are not. There is a world of difference between vigilante groups and private militias bearing arms provided by the state.

As a matter fact, vigilante groups often have common-good underpinnings, and arise when thoroughly-fed-up community groups feel that law enforcement agencies consistently fail to punish wrongdoers in their midst, and therefore take the law into their own hands to exact justice, by meting out punishment to wrongdoers themselves.

An example of such vigilantism, is the recent phenomenon of angry youth in Asante Akim, directly confronting nomadic herdsmen, who allegedly have been raping local women, and also murdering protesting farmers, who complain that the herdsmen's cattle have been destroying their farms.

We are not a conquered and subjugated people, whom the New Patriotic Party (NPP) vanquished in a battle, for us to come under the jackboots of brutish and uncivilised myrmidons-in-uniform, controlled by wealthy and powerful men with dubious backgrounds, such as the Bernard Antwi-Boasiakos and Kennedy Adjapongs. One of the reasons some voted for Akufo-Addo to lead Ghana, was hope that he would instil discipline into society.

Conversely, we can also vote his party out of power again, if that will free us from the clutches of marauding thugs-in-uniform, abusing our human rights with impunity. Furthermore, Parliament must also investigate the matter of the morphing of the NPP's private militias into state-sponsored paramilitary forces, who are now threatening our freedoms, as a people.

Remaining a free people, with constitutionally guaranteed rights, is something that the vast majority of the ordinary people of our country clearly cherish - which is why those bearing ultimate responsibility for the transformation of the NPP's armed private militias, into armed state paramilitary forces, must be tried for treason. Full stop. Haaba. We rest our case.