The Nigerians would say Oshea baddest
By Tuntum Nahana Akosua 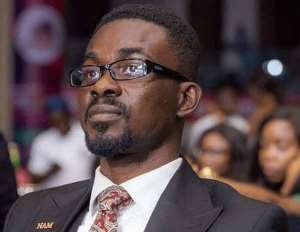 Nana Appiah Mensah ( Nam 1) the 34 year old badder than Al Capone, Frank Lucas( One of Harlem's greatest gangsters), Stanley Tookie Williams and Raymond Washington ( founders of the crips) and just about any legendary gangster you can think of. Unlike the gangsters above, Nam 1 did not have to kill anyone or use muscle. He used his brain and inciting words, like the devil to deceive many Ghanaians. And make a 200 million dollar plus fortune on theft. Ghana gave birth to one of the worlds most skilled ever gangsters and fraudsters. ( We've made our name worldwide with fraud bae, but Micheal Fehsenfeld is nothing compared to Nam 1).

Who else could have a gold company selling Aurum Utalium ( the street name for fake gold) and tell his customers that the only gold Menzgold trusts is from Nam 1's own company, Brew consult. Therefore he collects their money for the fake gold at a high price, and then the customers also invest in Menzgold. So cons his customers twice and does not loose any money.

Then he sat down and thought how can I get more victims. I'll start a record company, and only employ stars who are extremely successful. Ghanaians like show and money. I'll offer them hundreds and thousands of my stolen money. Some cars, give them houses, one a double decker bus advert and a spa. Watch them leave everything to join me. Then I'll make them and some other stars ambassadors for Menzgold, and their loyal fans will follow me. I'll pick people who are known for standing up for truth. Yet I know with money in Ghana, all things are possible.

Nam 1 succeeded in tricking the stars. He even made them invest the money he offered in return for them being signed unto Zylophon into Menzgold. Now it turns out his mansion, the cars, the private jet and the things he acted like he owned do not belong to him. They are rented. Who knows how he acquired the cars and other property for them. I mean which other criminal has such a dubious genius mentality. Even if the assets are seized they don't belong to him. I don't know how he came up with these ideas, but they were absolutely brilliant. Evil.... but fantastic.

When he found out he was about to get caught he run off to Dubai. I do not believe he was going there to collect money for his customers, he was going to fill him,his fugitive wife, family and friends pockets. Unfortunately for him, he met his meter in the Dubai police. Now the Ghanaian government is trying to bring him back to Ghana to answer for his crimes. Those of us who study the Ghana criminal justice system in practice not thought, know that justice will not be served in Ghana. Menzgold customers will not get their money back. Who has ever seen an armed robber get caught and give his victims stuff back. How much more Nam 1 a class A robber.

Nam 1 managed to do what most high profile criminals cannot. He chilled with Nana Akuffo Addo, Otumfuo Osei Tutu, people of high profile in Ghana and the world. He garnered their respect and displayed his wealth in front of them. Most envied or admired the man for his success at the age of 34. Not knowing he was a common thief. He had journalists from TV3 beaut up for him by the ordinary man ( politicians do not even achieve such a fate) and the bank of Ghana criticised by the public.

He even got dubbed Ghana's messiah and Jesus. Not even Kwame Nkrumah was bestowed such a title. I wonder why won't Ghanaians forgive him. After all journalists were evil for exposing corrupt judges, Kwesi Nyantakyi, politicians, orphanage robbers and other criminals of high profile. Journalists made them lose their jobs and livelihood. Even when Ahmed Hussein-Suale died. Many Ghanaians cited that the evil men do lives after them. Therefore, why are the supporters of corrupt men so upset about Nam 1. Even Kennedy Agyapong, the one concerned with criminals getting conned ( according to him by Anas) is criticising Nam 1.

Now people are citing people getting strokes, loosing their properties, not being able to pay their children's school fees and suffering financially because of Nam 1. Do people know how many people in Ghana die because of corrupt doctors. How many children don't go to school because our politicians, judges and those suppose to serve the country are using those resources to buy clothes and a lavish lifestyle.

Do people know that all in Ghana are suffering financially because those in power are not trying to build Ghana, but steal the money for their own gains. What has Nam 1 done that those in power are not doing. Yet Ghanaians always want to forgive, journalists and those who want to hold the government and those doing wrong to account are apparently evil. Therefore the easy answer to deal with the Nam 1 issue is forgiveness. Vengeance is God's, isn't that what we preach ?Let's practice. Enough of this "blood will be drawn if we don't get money." Don't we preach, do not repay evil for evil.

It's not my view Nam 1 should just be forgiven. I am just showing Ghanaians their hypocrisy.

I am an Akyem and Akuapem. Who loves to write, learn, discuss politics and women's issues. I also love to read. I have an undergraduate degree in English literature and Creative Writing and a Masters in Creative Writing.