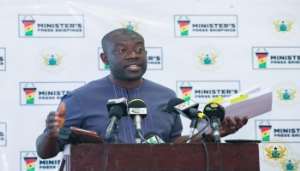 The Minister for Information, Hon. Kojo Oppong Nkrumah has hinted government will on Friday, December 14th announce a new mining policy framework to regularise and reform mining activities in Ghana.

He made above utterance known at a maiden National Policy Summit at Western Plus Atlantic Hotel, Takoradi in the Western Region.

The announcement comes twenty one (21) months after a ban was imposed on illegal, irresponsible as well as small scale mining activities in the country.

Hon. Oppong Nkrumah emphasized "While some have speculated a lifting of the ban, government has been quick to correct that what will be announced is a new policy framework within which the over 3,000 newly trained former galamsey operators as well as thousands more who are interested in mining can operate legally".

He added "The ban was imposed in March 2017 when it was observed that small scale mining was being used as a cover for irresponsible mining as well as even illegal mining in many parts of the country. The practice fast led to a degradation of the environment affecting severely rivers and forest reserves. In some cases it even led to a contamination of agricultural products as a result of the absorption of dangerous chemicals used".

The Minister opined "Upon institution of the ban, a security operation known as Operation Vanguard was launched to enforce the ban. The operation comprising military and police men and officers has largely been successful in containing the situation. Several recalcitrant operators were also arrested and their equipment seized".

"An Inter-Ministerial Committee against Illegal Mining was established to supervise ban and the transition to the new legal and well-regulated mining regime. The committee has completed its work and received cabinet approval to roll out the new framework", he added.

The announcement will outline the following;
1. How validated and legal responsible miners can mine after the 15th of December

2. Processes towards dredging and land reclamation in affected areas

4. Legal reforms in the mining sector
5. Efforts to avert a resurgence of illegal and irresponsible mining

He was confident "It is our expectation that stakeholders and the general public will continue to cooperate with authorities even as this new phase is rolled out".

He said the Inter Ministerial Committee on Small Scale Mining will give an update on the work done so far and the current status ahead of the announcement during the second day thus, Monday, December 10, 2018 of the Summit.

He, therefore, urged the media to help the government to amplify this presentation through their various pltf.

"We encourage the media to help us amplify this presentation through your various channels", he urged.

He used the opportunity to explain the some benefits Ghana will derive from President Akufo-Addo's visit to Japan.

According to him, President Akufo-Addo’s visit to Japan on Monday 10th December 2018 is expected to further deepen Ghana-Japan trade ties which have been strong in recent years.

He added "The President as was announced today will arrive in Japan on Monday for a three day official visit. The bulk of his meetings will focus on the industrial giants of Japan in an effort to strengthen trade relations and deepen efforts at attracting more Japanese FDI and knowledge transfer to Ghana.

He emphasized "The President will also specifically be at the GIPC – Jethro business seminar to make a strong case for Japanese businesses to situate in Ghana under the 1D1F program".

He added "In recent months the President’s International visits have yielded dividends for Ghana including the recent announcement of automobile companies that are setting up in Ghana in 2019".

He stressed "It is our expectation that this visit as well will yield further dividends for the Ghanaian business community".

Background
Government in March 2017 imposed a ban on small-scale mining following a destruction of major water bodies and forest reserves across the country.

Upon institution of the ban, joint military and policy security operation known as Operation Vanguard was launched to enforce the ban.

As of October 2018, Operation Vanguard had arrested about 1,687 illegal miners.