The White-Washing Of Santa Claus 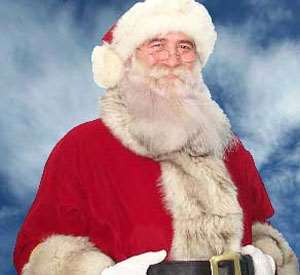 For starters (spoiler alert) Santa Claus is an imaginary character—not real. The jolly guy in the goofy red suit is an American icon of popular culture. Although portrayed as magical—he’s mythical. The Santa story is a fabled fairy-tale—not true. A lavish legendary yarn. The roly-poly male with the white beard is a fictional character. Flying reindeer, a toy manufacturing center at the North Pole, and hardworking elves—not real. And Mrs. Claus is imaginary as well.

Santa is modeled after St. Nick, a real man, but what was the color of the bishop’s skin—and does it matter? Saint Nicholas of Mira, fourth-century Christian saint, was a breathing and sneezing person. Santa Claus is not.

Santa Claus is also known as Kris Kringle and Father Christmas. Because Santa is a myth, he is made into whatever race or ethnicity his followers want him to be.

Does Santa only speak the English language? How does he communicate when he drops off toys to children in other countries? Is there a translator at the mall?

And Santa doesn’t claim a religion. Do Americans assume he’s Christian? And if so, is Santa Catholic, Protestant, Baptist, Mormon, nondenominational, or other?

Aisha Harris penned a 2013 article on Slate about growing up black in a world with a white Santa Claus. Harris writes, “Seeing two different Santas was bewildering. Eventually I asked my father what Santa really looked like. Was he brown, like us? Or was he really a white guy? My father replied that Santa was every color. Whatever house he visited, jolly old St. Nicholas magically turned into the likeness of the family that lived there.” www.slate.com/.

Let’s revisit the landmark 1954 civil rights case Brown v. Board of Education. Researchers questioned small children using a black doll and a white doll to measure perceptions about race. The tool measured attitudes about what color has to do with being (“pretty” or “good”) or (“ugly” or “bad”). The “Doll Test” was cited by the Supreme Court in support of its conclusion that segregation harmed the psyches of black children. And anti-black racism is internalized by young black children.

Former Fox anchor Megyn Kelly, Rush Limbaugh, and Bill O’Reilly (all Caucasian) spoke out to proclaim and defend a traditional white-skinned Santa. Folks, Santa is not a real person.

Why is there racial controversy over the color of a fictional character’s skin? Just because it’s a long-told traditional tale does not mean Santa real.

My list of solutions: 1. Make Santa’s skin the color of a rainbow, 2. Stop lying to kids about Santa being real and do away with him, 3. Be inclusive and respectful of an African-American Santa, a Hispanic Santa, an Asian Santa, a Native American Santa, a multiracial Santa, an African Santa or a Santa Claus of any color, race, ethnicity, culture.

White families can still visit their white Santa at the mall; however they need to zip their lips when families of other skin colors choose to visit with their Santa of color. And stop telling white children that Santa is only white-skinned. Santa can be any color of skin because Santa is not a real person. And Santa can represent all human beings.

Racism in our celebration of the Christmas holiday needs to end in the USA and in other countries.

Melissa Martin, Ph.D., is an author, columnist, educator, and therapist. She lives in U.S. www.melissamartinchildrensauthor.com .