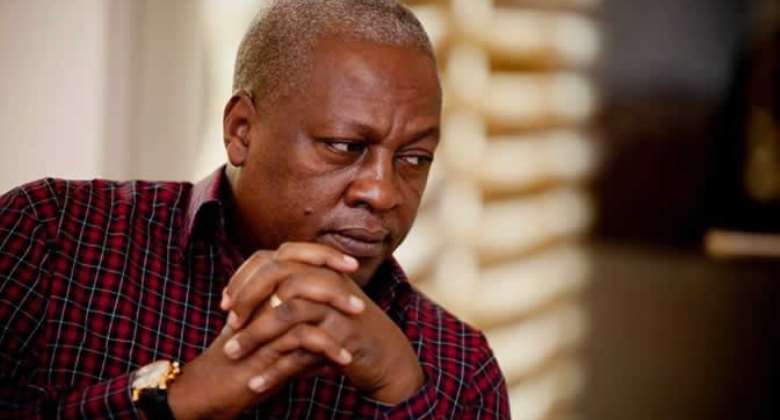 Anyone who knows President Mahama and going by his antecedents so far knows that attempt by misguided souls, self-seeking persons and unprincipled persons to smear him is mischievous. Attempt to paint the former President sectional cannot hold water. The claim, unfortunately, is the stock in trade of the anti-Mahama elements who relish in playing the tribal card. Unable to contain the Mahama pressure and being mesmerized by the overwhelming support the former President is enjoying across the country, they have resorted to this primitive ploy to create disaffection in parts of the country. Patriotic Ghanaians and supporters of the Great NDC should be wary of those behind this campaign.

The machinations of Razak and others behind this campaign are too well known to be accorded any credence.

What is required of all NDC supporters, sympathisers and Ghanaians in general regardless of where they come from and their religious persuasion is to pray for the return of the NDC to save Ghana from the terrible bleeding state and demonstrate our unflinching support to Mr Mahama as he prepares for the second coming.

The one making the allegation against former President John Mahama, Kojo Poku Razak, was the one who called on President Akufo Addo to sack all members of the NDC at National Lottery Authority who do not share in the vision of the President. He is yet to tell us the NDC members who were working at the Authority. He was the same person who appealed to President Akufo Addo to investigate the Director-General of the National Lottery Authority Mr Osei Ameyaw for alleged corrupt deals describing him as "not trustworthy who lacks the spirit of consistency"

Razak went from one radio station to another preaching his "remove Ameyaw" crusade and had several clashes with the NLA boss on Radio platforms. Few days after the clashes he surprised the radio presenters who hosted him on their platform when he was heard defending Mr Osei Ameyaw on the very allegations he levelled against the man. Razak is now the NLA Director General's spokesperson- speaking for the man he described as not trustworthy, the man appealed to remove, the man he described as unpatriotic and the man he openly insulted on Radio. This the man who wants Ghanaians to dignify his divisive comments about the former President. In his own party, he has lost the little respect he enjoyed in the past because of his unprincipled behaviour, lack of consistency and primitive politicking.

It is imperative to understand that it is not tribal feelings or regionalism themselves that cause trouble, there ab is nothing fundamentally wrong in feeling a special love for your tribe in their politicization. Most of the ethnic troubles have its roots in the manipulation of ethnic loyalties by mischievous politicians and their misguided agents who tend to stir up rather than soothe, ethnic passion to suit their selfish purposes. When did His Excellency President John Mahama start hating Voltarians? He embraced the Volta region just as he embraced the other regions by appointing many Voltarians into his administration including Governor Wampah, Fiifi Kwetey, Sam Okudzeto, Prosper Bani, Hon Dzifa etc. His personal lawyer is a Voltarian and most of his security personnel are Voltarians. Practically, he demonstrated his respect and love for the Volta and Central Regions by making sure the two regions got their fair share of his projects. In the Volta region, he built the Ho Airport, the Ho Market, the many roads including the Eastern Corridor project, University of Health and Allied Sciences, the Community Day Secondary Schools etc. His projects or developments in the Central Region rubbish the allegation that he has an agenda against the region. The chiefs and people in the Region dealt with him as their son and brother than a political head. The transferred their respect and reverence for Prof Mills to him and he guided that respect and love carefully. He appointed Paa Kwesi as his Vice when he took over after Prof's demise. Apart from the many appointments he made from the region including two deputy finance ministers, trade Minister, deputy communication minister, heads of many state institutions etc, he made sure the region got its fair share of his projects including the Kotokuraba market, Cape Coast stadium, roads, community day secondary schools, shops compounds, polyclinics, JSSs, etc,

This attempt by some disgruntled persons to tag Mr Mahama as a tribal bigot is part of their anti NDC/Mahama ploy which must be treated with the contempt it deserves. The NDC is a congress and has operated from that position since its formation. Mr Mahama made sure development reached all the regions. He improved road network in all the regions, provided portable water, built regional, district hospitals and polyclinics across the regions, etc. President Mahama disapproves of tribalism and never entertained it in office. Let's guide our party against self seeking politicians who want to use tribalism as an avenue,a springboard , for their evil desires. People who often stir up internal conflicts between the various tribes through such frivolous allegations to achieve their evil plans. Ghana and NDC need more of Mahama-kind to cure this emerging toxic tribalism being pushed into our body politic by those selfish politicians. The appointments he made confirmed his long held disposition that we must always identify ourselves as Ghanaians first, before identifying our ethnic groups and national interest, not ethnic interest should be given supreme importance. He is a strong believer of the NDC's philosophy that- power must be decentralised rather than be concentrated in the hands of an unproductive and clustered centre headed by selfish leaders. Ghanaians are not looking at which tribe the next messiah will come from- they are crying for John Mahama whose performance they using as yardstick in assessing the current administration. The people of the two region via their delegates displayed maturity and genuine love at the last congress and made us aware they are not interested in what the miscreants are pushing via their media allies, but real power.

This is the breakdown of FEC members by Region.

We must always be mindful who relish that we still have unrepentant haters around who relish trumpeting falsehoods, bogus doctrines and kindergarten lies. Their entitlement mentality makes them feel that they are head over shoulders above others in every shape and form. The person making the allegation will soon disappoint his paymasters