Are We Better Off? 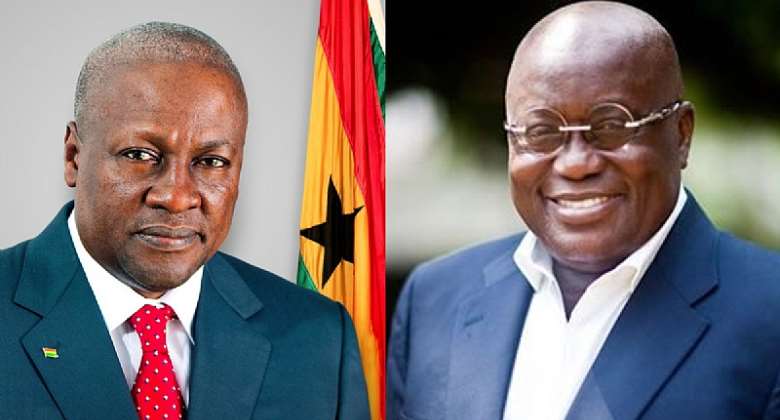 In 2018, two years after President Addo Dankwa Akufo-Addo won his victory in the 2016 general elections, can't we ask Ghanaians if they are better off today than they were in 2016, when President John Dramani Mahama and the National Democratic Congress were in power?

The essence of all governance and economic management is to make life better for the citizens of a country. Whenever political parties propose to citizens for their mandate to rule, they do so with the implied promise that they would improve the conditions of living for the people. It is a social contract that no government can run away from. The worst any “new” government could do, if it were not able to improve on the conditions of living for its people should be to keep those conditions of living just as they had come to meet them. No less than that. Any thing other than an improvement or keeping the status “quo ante” is abject failure on the part of any “new” government, and must be rejected outright by the electorate.

It is on this basis that I set out to examine the statement said to have been made by the Deputy Minister of Information, the Honourable Pius Enam Hadzide and published by “ModernGhana.com” an online news portal, to the effect that President John Dramani Mahama should appreciate the works of his successor President Akufo-Addo for his social interventions such as the Free Senior High School programme.

The free Senior High School has become a handy mantra for the Akufo-Addo government and its officials as the panacea for every ill of the Ghanaian economy and society.

It should be possible for us to subject to analyses the economic and social policies or programmes introduced by the Akufo-Addo regime since coming to office on 7th January, 2017, and to examine what toll prices, rates, taxes and other levies have exacted on the fortunes of the people, so as to compare them with conditions that existed in 2016, when President Mahama and the National Democratic Congress (NDC) were in power.

For the purposes of comparison and analysis I will use only two examples, one each on the positive and negative sides of the equation to illustrate my point, viz;

3. Let's take the case of a Taxi or TROTRO Driver who has a child in Senior High School, in first or second year.

Undoubtedly, the most prominent social intervention policy introduced by the Akufo-Addo regime is the constitutionally mandated Free Senior High School programme (Free SHS) which is being implemented in phases just as its predecessor the NDC government was before they came to power. At the micro level on the part of a parent, the Free SHS means that school fees of a child in senior high school and in boarding house per term amounting to about Seven Hundred Ghana Cedis(GHC700.00) have been taken over by government and therefore this amount becomes financial resource available to such a parent for some other expenditures. That parent therefore is better off by GHC700.00 or Seven Hundred Cedis for over a period of three months, courtesy Akufo-Addo’s “Free SHS”. In addition to the free boarding fees, text and exercise books are supplied to the students. The total of this works to about GHC800.00 Therefore, the total expenditure borne by government on behalf of parents with children in SHS works to about GHC2,100 (700x3) plus GHC800.00 which is GHC2,900.00 in a year. This is the positive side of the equation. We must also realise that this policy is discriminatory as it benefits only those whose children are in SHS.

On the negative side is the increment in petroleum prices over these two years.

A gallon of petrol/diesel was GHC14.00 as at 2016 when Akufo-Addo took over the reins of governance.

Now to determine the financial circumstances of the Taxi/Trotro Driver who has his child in SHS:

The above calculation based on changes in fuel prices alone shows that as at present, a Taxi or Trotro Driver incurs a whooping expenditure of GHC11,062 over and above his expenditure levels in 2016, in running his business. While it is true that the Taxi or Trotro Driver would pass on some of his costs to his passengers in the form of increased transport fares, he cannot recover a hundred percent of his costs. Moreover, in addition to fuel, the transport operator has additional costs such as spare parts, maintenance, insurance and roadworthy certificates which he has to incur in the course of the year.

Some people have argued on behalf of unemployed persons whose children might most probably be benefiting from the free SHS. While this might be true, such a case would be a complete outlier which cannot be a representative sample of beneficiaries and therefore cannot be used for an argument of this nature. More over financially the conditions of unemployed persons are worsened by the higher costs of living today than in 2016.

Overall therefore, one has to come to the conclusion that living conditions have deteriorated now than they were in 2016. I would be most happy to see any calculations to the contrary. Food prices in the markets have skyrocketed by over 150% as reported by a Joyfm survey carried out in 2017 November. The recent mutilation of the Value Added Tax by removing the 2.5% National Health Insurance Levy and the 2.5% Getfund and turning them into flat taxes has led to a 5% hike in the prices of goods and services at the factory gate. The truth is that prices at the retail stores of goods would be much higher than the 5% increments at the factories.

Then there is the case of the Ghanaian middle class which has become worse off as a result of the Finance Minister’s mid-year tax measures in July, 2018. Ken Ofori-Atta has increased taxes on personal income for persons earning GHC10,000/month from 25% to 35%. The irony of this is that the Akufo-Addo regime had promised to reduce taxes from 25 to 20%. Those affected are relatively well off on whom relatives depend for stipends in bad times. Now only God knows to whom poor relatives would turn in these hard times. In a country with no unemployment benefits, such measures as this go a long to making paupers out of people.

During the early parts of this year, as part of the 2018, budget proposals, the Finance Minister announced new reduced rates for all manner of categories of electricity consumers. That was followed by the Public Utilities Regulatory Commission (PURC) issuing new tariffs for consumers. Strangely just last week, the Honourable John Jinapor a minority member on the Energy Committee of Parliament took the Electricity Company of Ghana (ECG) to task for increasing its tariffs by 33% unilaterally without informing the PURC and on the blind side of consumers. This kind of deceit is the trademark of the Akufo-Addo regime. I have already mentioned the weird calculations that resulted in a 3% flat rate VAT being higher in taxes than even a previous 17.5% VAT.

How my friend Enam Hadzide could look Ghanaians in the face and tell them that their circumstances are better today than in 2016 beats my very elementary understanding and I am most willing to be tutored by him on this matter.

In the 2017 budget, the government announced the reintroduction of the flat rate VAT of 3% from the normal 17.5% VAT, which led to wild jubilation among small scale importers and traders in Accra at Abossey Okai and Suame Magazine in Kumasi. It turned out to be a hoax as a practice note on the implementation of the policy issued by the Ghana Revenue Authority, led to rates much higher than the previous 17.5% that the traders were paying.

Overall, the economic policies of the Akufo-Addo/Bawumia government is leading to the strangulation of the Ghanaian economy. In 2017, the real economy without oil grew only sparingly and below that of 2016. In 2018, the best estimates are that the economy will grow by 6.2% also below 2017 levels. In 2019 the GDP will drop by 0.3% to 5.9 and remain the same in 2020. GDP growth of the real economy has been disappointing under the Akufo-Addo government.

The only thing pushing the growth of the Ghanaian economy is oil production which unfortunately is in the hands of foreign multinational companies. Apart from the 15%-20% held by Ghana National Petroleum Company (GNPC) for and on behalf of the sovereign people of Ghana, and royalties and ground rent paid by the international oil companies to government, the rest of the oil revenue goes to foreign operators of the oil companies. Even so, the Akufo-Addo government has been much more luckier than the Mahama led regime which worked so hard to get two more oil and gas fields to start production at the tail end of the regime on its way out of power. Even with these increased revenues from additional production from three production platforms as against one previously, and appreciation in the price of oil on the international market from US$40.00 in 2016 to US$80.00 presently, the Akufo-Addo regime has little to show for its stewardship in terms of development projects and improvements in the lives of the citizenry. Families are finding it extremely difficult to make ends meet.

The government is tight fisted, not spending on any projects and refusing to pay for work already done by contractors under the previous regime. In the process there is very little money in circulation and many businesses are collapsing under the government’s very eyes. In the midst of all this, the government was bent on increasing the capital requirements of banks from GHC120million to GHC400 million leading to the collapse of not less than seven banks so far and even more there are talks by the Bank of Ghana(BoG) of closing down a number of loans and savings companies which are the backbone of the vibrant informal economy which is the engine which has kept the Ghanaian economy going, in the face of the dismal performance of the economy so far.

In the face of these realities of the stark failures of the Akufo-Addo regime, the least people like Enam Hadzide can do, would be to keep their mouths shut and not annoy us by their uninformed statements. We are wide awake.

Your quest to harmonise our country's religious diversity co...
6 minutes ago