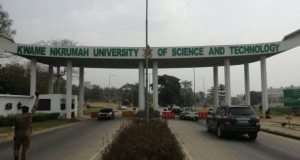 Labour Unions at the Kwame Nkrumah University of Science and Technology (KNUST) say they will resist government's attempt to stop members of the dissolved governing council from being part of the yet-to-be reconstituted one.

They argue that the government has no business meddling in the affairs of the unions hence their resolve.

“It is patently clear that government has no business meddling in the representation of UTAG or any other unions or associations on the University Council. This is what government is refusing to understand and appreciate, and has consequently created an erroneous impression that they can pick and choose who represents UTAG or any of the unions or associations or the Council.

“We categorically state without apologies that by the very act and statutes of KNUST, the representation of the Unions or Associations on the Council is not up for discussion with the government.”

Meanwhile, the National President of UTAG, Dr. Eric Opoku Mensah, has called on the National Peace Council and other faith-based organizations to speak up.

Information Minister, Kojo Oppong Nkrumah had explained that members of the old council played a role in the chaos that led to the closure of the University, hence the decision not to include or accept any member of the old council onto the yet-to-be council.

The government has come under attack after it dissolved the governing council of KNUST following a violent student protest that led to the indefinite shut down of the school.

An interim committee that was set up to temporarily run the school did not have the backing of major stakeholders because the concerned groups wanted the old council reinstated.

The government effectively abandoned the new Council and is now preparing to outdoor a new council with the Chancellor of KNUST, Asantehene, Otumfuo Osei Tutu II, leading the efforts.

The new council was to be outdoored last Friday, but that did not happen because the government’s members were not ready, and also because there is confusion as to whether some members of the old council, can be allowed onto the new council.

But addressing journalists in Accra on Monday, Mr. Oppong Nkrumah mentioned that, government’s position remains unchanged, because of its commitment to have a council with the needed freedom to bring calm to the University.

“Individuals who sat on the old council ought not to be on the new council. The old council is a party to the impasse that took place at the KNUST campus. Just as the actions of students, student's leaders, school management and the council will be subjects of the full investigation when the University is re-opened. It is important to ensure that the Council that is put in place has the freedom to superintend over that exercise.”

“So the specific persons who constituted that old council cannot preside over the matters in which their own decisions and conduct will be a subject. It is in this spirit that government and some other groups have already indicated new nominees,” he noted.

The government has finally submitted its list of nominees for a reconstituted council to the chancellor of KNUST, awaiting approval.

The Information Minister said, “government has indicated its new members for the KNUST council. It is our understanding that two other groups (CHASS and NCTE) have also done so”.

Constitution of Council fails as gov't clashes with UTAG, TEWU

Government's attempt to force the University Teachers Association of Ghana (UTAG) and the Teachers and Education Workers Union (TEWU) at KNUST to present entirely new representatives to the school's new governing council on Friday, forced a postponement of a swearing-in ceremony for the new council.

The KNUST-Chapter of UTAG, said the government's demand was surprising, especially as both parties had earlier agreed that it was impossible for the government to dictate to them who to bring onto the council.

The government, after a high-level meeting with the Asantehene, Otumfuo Osei Tutu II, who is also the Chancellor of KNUST, agreed that all representing groups on the KNUST governing council would present their nominees for a new governing council to be inaugurated on Friday, but that could not happen.

The KNUST Chapter of UTAG, said the government's demand was surprising, especially as both parties had earlier agreed that it was impossible for the government to dictate to them who to bring onto the council.