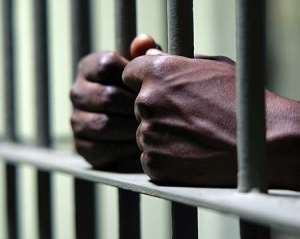 A Magistrate Court in the Asokore-Manpong Municipality of the Ashanti region has remanded a 21-year-old Akwasi Yeaboa Abel into prison custody for his involvement in the violent protest that rocked the Kwame Nkrumah University of Science and Technology (KNUST).

Yeboah who is not a student of the University was picked by the police during the Students Representative Council-led demonstration against student brutality on the University’s campus on October 22.

The demonstration led to the destruction of properties estimated around GH¢1.7 million including vehicles, CCTV cameras, laptops, computers, among others.

Police search on Yeboah, a shoemaker based in Asafo, a suburb of Kumasi, dressed in female artificial hair after his arrest retrieved a knife from his pocket.

In an interview with Ultimate FM, Deputy Ashanti Regional Police Public Relations Officer, Corporal Prince Dogbatse said Yeboah has officially been charged with two different offenses including rioting with a weapon and carrying an offensive weapon after he confessed he is not a student of KNUST.

The suspect who was remanded into prisons custody by the Asokore-Mampong Magistrate Court is expected to reappear before the court on 12 November.

The Police are hopeful to complete their investigations on his involvement in the protest for trial to commence.

Meanwhile, the 21 students who were arrested in connection to the demonstration have been granted bail to cooperate with police investigation without interference.

The suspects, according to sources, were hired by faceless politicians to cause havoc in the supposed peaceful demonstration.