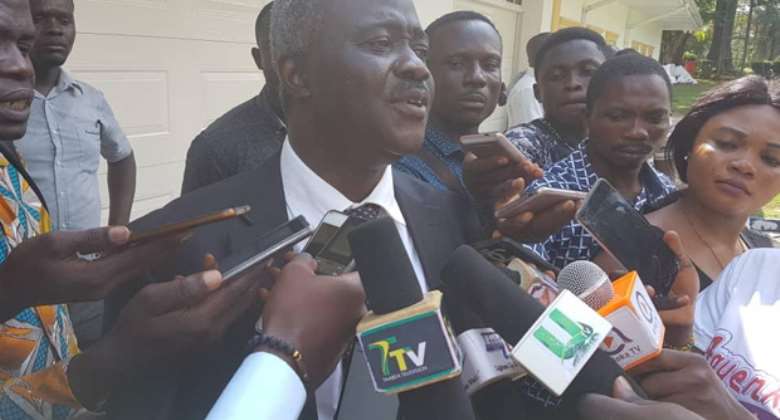 The Vice Chancellors of Ghana, a body of all VCs of public universities in the country, has commended government for the rapid manner in which it ordered the closure of the Kwame Nkrumah University of Science and Technology (KNUST) following violent protests by students.

According to the VCs, owing to the breakdown of law and order, there was the possibility of the irate students destroying more properties in the school.

The Vice Chancellors of Ghana disclosed this after they joined the Asantehene, Otumfuo Osei Tutu II, who is the Chancellor of KNUST, to inspect the extent of damage at the KNUST.

In an interview with the media after Wednesday's inspection tour of KNUST, spokesperson of the VCs, Prof. John Gyapong, who is the VC of University of Health and Allied Sciences, said they were amazed to see the massive destruction of properties on campus.

He said the irate students could have destroyed many properties and even caused more security problems in the school, saying “The government acted rightly by closing down the university in that quick manner.”

Prof. Gyapong implored government to respect the statutes of the university to restore normalcy to the school to allow KNUST students to continue with their academic work.

He said the Asantehene, who is the Chancellor of the KNUST, deemed it prudent to invite the VCs of all the public universities in the country to join to assess the situation on the ground.

Prof. Gyapong, on behalf of his colleagues VCs, assured that they would support the Asantehene and all other relevant bodies to maintain law and order, saying their prime motive is to make sure that students return to school immediately.

He announced that plans are underway for an independent committee to investigate the matter at the university, explaining that the outcome of the committee's findings would help prevent riots in KNUST and other public universities in future.

Prof. Gyapong stated that the violent protests at the KNUST had taught the VCs of the remaining public universities in the country a great lesson of “exploring innovative ways of engaging students.”

They totally condemned the violent acts of the irate students.

He said under no circumstances should students adopt violence means to express their grievances, suggesting that dialogue is the appropriate means for students or any other group to fight for their rights.

He added that the massive destruction of properties at the KNUST was not necessary.

Prof. Gyapong also disclosed that the Asantehene would take appropriate steps to reconstitute the Governing Council in the KNUST possibly in the coming days.

As at the time of filing the report on Thursday evening, Otumfuo was in a meeting with VCs of public universities at KNUST.

Accra: Report yourself or be arrested — Police camera captur...
4 minutes ago