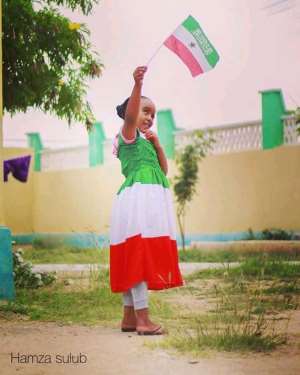 The Republic of Somaliland which was a former British colony and gained its independence from Great Britain on June 26, 1960. Later after 5 days of her independence, the people of Somaliland has chosen to unite with their southern Somali regions of an Italian colony.

1st July 1960 the southern Somali regions gained they independence from the Italian colony and then both regions united as one nation known as the "Republic of Somalia " due to certain conflicts that made by the military government of Somalia has done certain atrocities and crimes against humanity in all Somalia regions and in particularly in the northern provinces of the unity nation of Somalia , where the military government led by dictator Mohamed Siad Barre has killed around 50 000 innocent Somali people in what currently known as the "Republic of Somaliland" as well various regions in Somalia , where the military government tortured, killed and victimized all regions in which it's highest leaders believed that there are certain oppositions of the locals in those regions,

it was really used to all its military force against on what they called "an illegal opposition rebels" where even many various innocent people were killed, displaced and victimized illegally by the military government.

Then after the final collapse of the said Barre's military government in 1991.

The people of Somaliland declared that they quit from the unity plan in which they brought through for the love somalism and since they claimed that were victimized for what they strugled. Since from 1992 the self declared government of Somaliland has been apart from the rest of somalia and they achieved to perform they own democratic system governance and leadership, peacifull enviroment where there is no chaos wars, and a region which is free from insurgency and terrorism violence unlike their southern counterparts whom have been in all types of chaoses and violences since 1991, in which was the early year of the millitry governments collapse.

in recent last six months there were a certain great significant plottical changes in the horn of Africa, especially in Ethiopia , where the tigray people liberty front "tplf" has been overthrown as Ethiopia's ruling system, where the majority oromo ethnic communities have been strugeling under what they mentioned the "injustice" rule of tigray people leadership after 3 years of frequently public protest in that country, finally the Ethiopian civil societies have own to force the Tigray people's dictatorship governance system to step down and later the ruling party of Ethiopia has brought to the power a new prime minister from the Oromia region, which is the majority ethnic tribe of Ethiopia in order to be saved of the existence of Ethiopia as a nation.

Dr.Abiy Ahmed became the new prime minster of Ethiopia , and he was welcome by all democracy, justice and unity loving Ethiopians equally.

Dr.Abiy Ahmed has promised that he will serve for all Ethiopians , neighboring nations, Africa continent and the world through justice and democracy system.

Soon he declared that he will finalize the bitter hostility of his Ethiopian government and Eritrea in their dispute border conflicts that claimed the lives of nearly more than 100 000 people of both sides.

Dr.Abiy Ahmed has finally won to restore peace among the two nations (Ethiopia and Eritrea) and all normal lives and relations of both nations have come back normal.

This historical agreement of Ethiopia and Eritrea became a wonderful success lesson to the peoples and nations of the horn of Africa and the world too. Similarly in that process, it sounds like that the leaders, politicians and people of Somaliland should follow that success diplomatic footsteps of Dr.Abiy Ahmed , Ethiopia's current pm and they (Somaliland officials) have vowed that it's possible time that their country should open and have a lasting diplomatic dialogue with the government of Somalia.