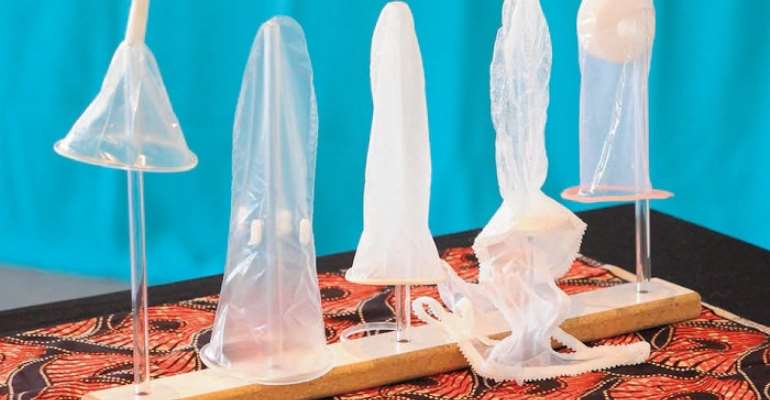 “I have never seen or used a female condom but I think it will be more expensive and complicated than the male condom.

I am more comfortable with male condom since condom should be a thing for the man,” Pamela Antwi says.

“For me, female condom will not be a thing for ladies as compared to the male condom in prevention of pregnancy.

Moreover, it is the man who has to do the protection since ladies do not think about sexually transmitted disease as compared to the guys.

I have only seen female condoms on television and also aware of its existence in the health care centers,” Grace Amarh states.

“Female condoms are too scary with the big ring that will cover my outer vagina and I cannot just trust it”, Bettina Oppong adds.

These were the views of some ladies when asked about the use of female condoms as a form of contraceptive.

The perception of condom use being the responsibility of the man coupled with the misconceptions of how it feels when used by a woman, has made the patronage and use of female condoms relatively low in the country as compared to male condoms.

After almost fifteen years of its existence as a family planning method and commodity in the country, it seems most Ghanaian women have still not bought into the idea. 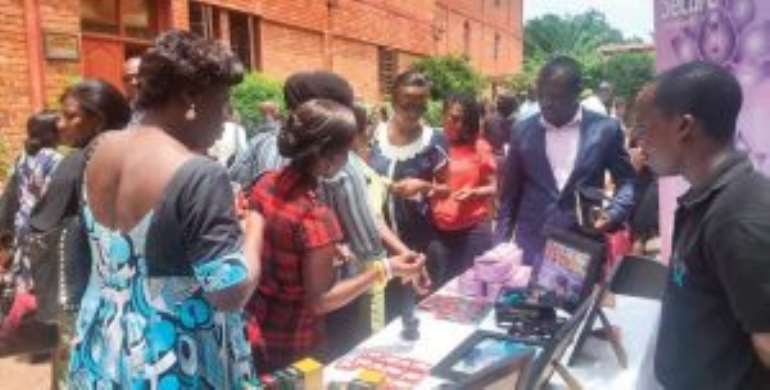 Knowledge, acceptance and utilization of the female condom among women of reproductive age in Ghana is very low as less than half (48.4%) of the sample were aware of the FC. It was further observed that 21.1, 21.8 and 11.1% of the sample reported friends, media and a public lecture as their sources of knowledge of the FC respectively. It was also observed that there is a low level of FC acceptance and utilization, and also limited access to the FC from nearby shops/pharmacies (1.8%) and health centers (7.4%).

Experts View
Angela Boateng, Family Planning Program Officer of the Ghana Health Service says the uptake of female condoms has been a challenge for the service because “with female condoms, the issue has to do with socio-cultural barriers. It takes a lot more engagements and discussion with clients for them to accept to use the method”.

She adds that providers have been trained to sensitize clients on it and teach them how to use it. However, on several occasions, the feedback is that even though they mention it to the clients and the clients are taken through its usage, the socio-cultural barriers that exist prevent the clients from accepting it.

“The other thing about female condoms is the procedure one has to go through to get it inserted into the vagina. And culturally, we have an issue going around that area even as women.

So when it comes to women having to do that, to get into the proper position to insert the condom into the vagina, the minds may be flooded with myriad of questions: will I be able to do this, do I want to do this, and do I want to go there? So then they say, let me go and come or I will think about it; they are excuses which may eventually affect the FC usage,” Madam Boateng explains.

The Family Planning programs officer further attributes the low patronage to the bad experience some women had when they used the first female condom (FC1).

The commodity in somewhere 2004, received a re-launch with the introduction of the Female Condom two (FC2).

She however says, the first experience had stuck with usage making it difficult to convince them to go for the FC2.

“With the first one, which was called the FC1, we received complaints that it wasn't well lubricated, it was a bit too thick and it used to make a lot of noise.

However, it wasn't only in Ghana, it was a global issue. So we got back to the manufacturers and they brought a new one, the FC2 which is now good and those who have used it attest to the fact that there has been a great improvement and it works.

But now, you know people build perceptions so to get them change their mind from their experience with the old one and accept the new one is also another challenge but we are working on it,” she adds.

Female Condom Patronage/Advantages
Another issue with the patronage of female condoms was that, they were hard to come by. DAILY GUIDE visited some pharmacy shops but almost all did not have it in stock.

Madam Boateng, however, was not surprised at the development saying the distribution of female condoms was done through a process from the regional to the district and then to the NGOs and private hospitals.

She further notes that private hospitals with family planning units who engage the Service also have access to the product adding that there was a market for Female condoms.

Highlighting the many advantages of the contraceptive, Madam Boateng says unlike the male condoms where the man must be ready before he can wear it, you can wear female condom hours before the sexual intercourse so for some people, it's a more appreciated option.

“It also gives the women control because she wears it so if the man doesn't want it and the woman wears the condom, she has control and because of that we have a market but it is not at the level we want it to be.

It's not like how we have our male condoms that are being sold out there and everybody knows it; we want the female condom to get there eventually to create options,” she observes.

Globally, availability and distribution of female condoms is said to have increased significantly in the past few years. In 2009, around 26 million female condoms were provided through international and non-governmental funding sources, compared to 10.7 million in 2006.

In Ghana, Madam Boateng says, the country currently has 340,000 pieces as at July 2018 in its stock at the central medical stores.

FP 2020
Dr. Anthony Nsiah Asare, Director General of the Ghana Health Service (GHS) says, “Everyone has a collective role to play to ensure that safe, effective and accurate family planning information and services are accessible to the Ghanaian adolescent, woman and man alike.

Touching on the country's performance in commitment towards the Family Planning 2020 target (FP2020), he notes that the use of modern contraceptive methods among married women is 25%, a 3 percentage increase from the 2014 Ghana Demographic and Health Survey report of 22%.

“It means that we are far away from achieving our national targets for contraceptive prevalence and the FP 2020 commitments which is 30% by 2020,” he stressed.

Interventions
Dr. Nsiah-Asare said government has started the inclusion of family planning services in the benefit package of the National Health Insurance Scheme, on pilot basis.

The test inclusion of family planning in the Scheme's benefit package for valid NHIS subscribers, which began in May this year, is being carried out in six implementing districts and municipalities with varied demographic/characteristics across the country for the next two years.

The beneficiary areas include Nabdam, Bawku West and the Bolgatanga Municipal in the Upper East Region, Obuasi Municipal in the Ashanti Region, Adaklu-Anyigbe District in the Volta Region, and Mankessim in the Central Region.

He disclosed that the Ministry of Health had also dedicated a significant proportion of its support from the West African Health Organisation (WAHO) of about one million USD to the purchase of family planning commodities.

The Director General of the GHS was, however, optimistic that with government intensifying its policy implementation of FP, uptake would improve significantly adding that “where women have access to these services, children and families are healthier, and society at large benefits.”