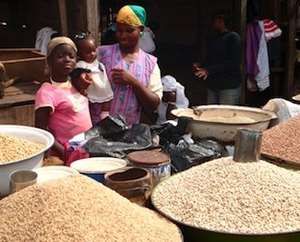 The Ghana National Chamber of Commerce and Industry (GNCCI) will lead a delegation to the African Growth and Opportunities Act (AGOA) Expo and Trade Fair in the United States of America from September 25 to 30.

The invitation to participate in the AGOA Expo and Trade Fair, to be held in the cities of New Rochelle and New York, is in recognition of the GNCCI's active role through the Ghana AGOA Trade Resource Centre (ATRC).

A statement from the GNCCI to the Ghana News Agency on Friday said the delegation would be led by Nana Appiagyei Dankawoso I, the President of the GNCCI, who would present the business and investment opportunities in Ghana, under AGOA.

AGOA is a non-reciprocal trade preference programme that provides duty-free and quota-free treatment for exports of over 6,400 products into the US market from eligible Sub-Saharan African countries, with the goal of encouraging export-led growth, economic development and improving U.S economic relations with Africa.

Since its enactment on May 18, 2000 by US President, George Bush, the Act has gone through many amendments to enable AGOA beneficiaries to take advantage of it after the initial 15-year validity period, which was extended to 2025 on June 29, 2015, by President Barack Obama.

The extension covered the Third Country Fabric Provision. The 10-year renewal period provided an opportunity for eligible Sub-Saharan African countries including Ghana to increase their exports into the United States Market, the statement said.

Ghana's performance under AGOA has been sustained by its broadly diversified exports to the US in the areas of textiles and apparel, energy-related products, agricultural products, footwear, and minerals and metals.

The surge in performance reflects the collective efforts by government and other stakeholders including the GNCCI, in strengthening Ghana's exports.

As part of the efforts to increase the awareness and build the capacity of exporters and potential exporters, the Chamber entered into collaboration in 2015 with the USAID West Africa Trade Hub.

The AGOA Trade Resource Centre (ATRC) was established at the Chamber to engage the private sector for regional and global assistance via trade intelligence, export development, business promotion, and trade facilitation.

A number of sensitisation and capacity building workshops have been organised in Accra, Kumasi and Takoradi to enable business men and women utilize AGOA.

Some of the topics treated in these workshops included US customs and regulations on AGOA, productivity, exports financing-risk and access to finance, financing export contracts and payment, packaging and food technology.

There would be a number of activities including African Beverages and Food Show; African Apparel, Textiles and Footwear Exhibition.

The participants for this event are the United States and AGOA eligible countries including Ghana.