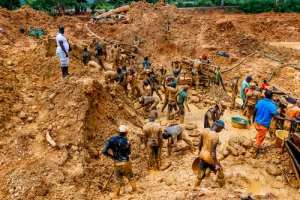 Government on Thursday 16th August 2018 had announced a roadmap for the lifting of the ban on small-mining. This came after an Inter-Ministerial Committee on Illegal Mining was constituted in March 2017 placed a ban on all small scale mining.

The Ghanaian mining industry has contributed greatly towards the socio-economic development of the country; but its negative impacts, particular on natural resource such as water is overwhelming. Mining along river bodies became incessant and it caused devastating effect on our river bodies. The quantity and quality of water available in mining communities in Ghana was declining rapidly as small scale mining activities was increasing. The direct use of heavy metal such as mercury discharged into the rivers from mining have the adverse effect on our food chain when it is accumulated in the soil, as well as the neurological effect on the body. The WRC launched a buffer zone policy for management of fresh water bodies in the country. As part of the policy, it sought to protect our rivers, especially activities that goes on along the river banks. Government should ensure that small scale mining avoid mining along the river banks.

Small Scale Mining (SSM) have evolved from the artisanal stage through the use of rudimentary equipment such as shovels, pick axes and sluiced boards to currently semi-merchandised operations involving the use of equipment such as excavators, bulldozers and Washing Plants. According to the Minerals and Mining Act 2006 (Act 703), Small scale mining operation means mining over an area of land in accordance with the number of blocks prescribed. This means that mining activities would require quite a lot heavy equipment to produce much in the result. Most, if not all, of these equipment are not manufactured here in Ghana. These heavy machines are at the very root of the destruction caused by Small Scale Mining. In this regard, government needs to monitor the import of these heavy equipment into the country to prevent the hazards they contribute to the natural environment.

It has been ascertained that attempts were made to address the monitoring, evaluation and reporting of Small Scale Mining but little improvements occurred. Government is said to have adopted a software application called GalamStop in a bid to fight against illegal mining. However, this is a one step forward in the fight against galamsey through (MERI) processes. There is the need for further improvement in the small mining industry and that would only come by educating the small scale miners on the sustainable method of Small Scale Mining.

Restoration of Degraded Forest area through the Rehabilitation bond

One thing that is clear about illegal Small Scale Mining is the destruction it poses on the forest and its lack of restoration of the mined-out areas. A rehabilitation bond is a financial surety which must be provided by the small scale miners to ensure that they restore the forest in the mined-out area, otherwise the money would be given to the Forestry Commission to embark on re-afforestation. The system has been in place with the Large Scale Mining companies and it should be judiciously adopted in the Small Scale Mining companies to protect the forest from degradation from rapid deforestation

In addition, attempts should be made to obtain some revenue (royalty) from all small scale miners by the efficient registration of these mining companies. When this is done, it would go down to impact the scaling down of the illegal Small Scale Mining.

In conclusion, although government had said that it had provided training for 3,000 students at the George Grant University of Mines and Technology on sustainable small scale mining method and it had launched a software called GalamStop to fight galamsey in Ghana, it would not be sufficient to curb the menace of illegal Small Scale Mining if these above highlighted process of activities are not adhered to.