A Roundabout And Looming Danger 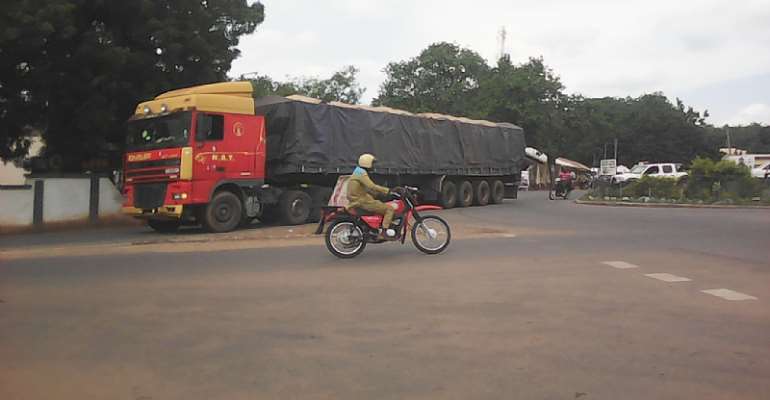 In every busy metropolitan, municipality and district there’s a roundabout. Roundabouts are also known as: traffic circles, road circle, rotary, rotunda or island. A roundabout is place where two or more roads meet, forming a circle that all traffic must go around in the same direction.

Implicitly, a roundabout is supposed to direct and regulate direct roads. Again, it is to avoid road crushes and protect road users respectively. Issues that concern safety and providing facilities that regulate and direct traffic on our roads lies in the ambit of the Ministry of Roads and Highways, Ghana Highway Authority, Urban Roads Department, and the Motto Traffic Transport Unit of the Ghana Police Service. Also, the safety of citizens in human settlements is in the ambit of the Metropolitan, Municipal, and District Assemblies (MMDAs). This is mandated in the Local Government Act 2016 (936).

Beyond that the safety in towns and cities is a human rights issue which features in the Sustainable Development Goals (SDGs) 11. SDG 11 states: “Make cities and human settlements inclusive, safe, resilient and sustainable”.

In the Wa Municipality of the Upper West Region, right in front of the Regional Police Command there’s a roundabout that directs traffic from the direction of the Regional Coordinating Council, from the Municipal Assembly, Jubilee Park, the Metro Mass Transit as well as State Transport Company terminals.

This roundabout directs traffic of vehicles bound for Tumu, Nadowli-Kaleo and beyond. This road is also used by heavy duty vehicles travelling to neighbouring countries: Burkina Faso, Niger and Mali. The paradox of this roundabout is: while roundabouts are constructed to prevent accidents, this roundabout rather poses a looming danger to the Regional Police Command as drivers of long vehicles and passenger vehicles face some difficulty in negotiating round this roundabout.

More questions than answers; pictures of a looming danger in the minds of those who care to notice.

Safety of the citizenry in our society is so appalling. It looks like dereliction of duty and lack of political will is the middle name of state institutions and policy makers who’ve the oversight responsibility of ensuring safety of the citizenry. That’s why traffic lights will be dysfunctional and those responsible sit and watch; Ministers of State and Chief Executives of MMDAs empathise and sympathise with flood victims, and then allow the root problems that underlie their plight to persist. On some occasions the blame is shifted to the contractor who is supposed to finish the work.

The recent accident that happened in the Ashaiman Municipality is also another point of reference. The Ashaiman Municipal Assembly knew of the traders who were selling on the shoulders of the road; but, the responsible person who will initiate the move to get them off the shoulders of the road turned a blind eye – and then what happened – lives were lost. One of the attitudes that has made the work of MMDAs difficult is the fear of making governments of the day unpopular.

A roundabout is constructed to prevent accidents and protect lives of the citizenry. This roundabout in the Wa Municipality causes one to pause and ask, whether it is serving its purpose.

At one point in time or the other, the media has reported on issues of how a looming danger has been ignored and the consequences have been dire. There’s an urgent appeal to the bosses of the Ministry of Roads and Highways, Ghana Highway Authority, Urban Roads, MMTU of the Ghana Police Service and the Municipal Assembly to move into action before lives are lost and property destroyed.

The cost of the lives and property can’t be compared to the cost of doing something about the said roundabout.