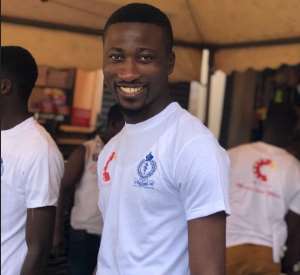 Obviously, one of the ill plaguing Ghana today is the misuse of drugs specifically "Tramadol" and other forms of substances which are either poorly regulated or banned for use in the country. Like a strike of light to a petrol or a smoker puffing cigarette smoke in the sky, illegal use and abuse of drugs has engulfed our society so much that most of these young men and women are suffocating to death under it's intense canker.

It is in the light of this unfortunate situation that I'll carefully examine the menace, causes, effects of using the un-prescribed drugs and suggest ways to ameliorate it.

First and foremost, any substance (with the exception of food and water) which, when taken into the body, alters the body’s function either physically and/or psychologically is referred to as drug. (Wikipedia 2018). Drugs may be legal (e.g. alcohol, caffeine and tobacco) or illegal (e.g. cannabis, ecstasy, cocaine and heroin).

For the crux of my discussions, tramadol abuse by the youth in recent times has become very important for national and for that matter international attention.

What is tramadol?
Tramadol (or "Tramol" as called locally) is oral tablet and a prescription drug that is available as an immediate-release and extended-release tablet. Tramadol is a controlled substance. This means it can only be used with a doctor’s close supervision.

Why it is used?
Tramadol is used to treat moderate to severe pain. This substances can be used as part of a combination therapy. This means you may need to take it with other medications.

How it works
Tramadol belongs to a "class of drugs" called 'opioid agonists'. A class of drugs is a group of medications that work in a similar way. These drugs are often used to treat similar conditions. It works by changing how your brain senses pain. Tramadol is similar to substances in your brain called "endorphins". Endorphins bind to receptors (parts of cells that receive a certain substance). The receptors then decrease the pain messages that your body sends to your brain. Tramadol works in a similar way to decrease the amount of pain your brain thinks you are having.( https:/ www.healthline.com/health/tramadol-oral-tablet ).

Drug (tramadol) abuse is firmly rooted in the following factors. In other not to "cry the wolf", the limited and difficult access to healthcare delivery in Ghana contribute to the abuse of the substance of play (Tramadol). Young people, especially, those living in the countryside, have no or little access to the various health facilities across the country. The little available ones are are nothing boosts of due to the poor regulation of the facilities and inefficient accessibility by the use of the National Health Insurance Scheme (which is to regulate medical health-care for the citizens in Ghana. These occurrences makes it very difficult for them to have the opportunity to consult a qualified health professional in moments of sickness, trauma or injury.

Citizens placed on such happenings would only have to rely on "tramol" or any other substance readily available in their surroundings. After all, if there is no qualified health professional, a quack doctor or a chemist's shop is nearby. What a pity!

Added to this is the cost hospital bills which tend to be unaffordable. The lay person walking in the street is incapable of receiving quality health services in the country. No seer to predict the increasing cost of medications and all kinds of health services provided in the country's hospitals.

The most disturbing is the embarrassment caused the poor sick person. Though I do not have evidences to prove to the fact that sick people have to pay money before they could see the doctor but I believe this is one of the reasons they stay in the corner and kick the bucket slowly but painfully. Is it any wonder for such poor people to shy from high cost medical care and resort to tramadol or street peddlers or buy from a chemist's shop at a low cost?

Quite prominent among the use of tramadol by young people is the desire of most of them to enhance their performances in various fields of human behavior. For instance, these young people use tramol and other un-prescribed substances to enable them do physically challenged activities. Most of them who are students erroneously believe that some 'special' drugs like tramadol would give them required fitness, strength and mental alertness to improve their performances in the tracks, academics and ability to 'last long' in bed.

The instreaming of drug itinerants and quack doctors in our streets and at the doorsteps, has orchestrated to a high incidence of drug abuse. It is worthy to note that, not only in our homes and streets that one catches a glimpse of quacks plying their trade, but also in buses and in "troskys". Their ability to entertain an audience, their sheer eloquence and the testimonies given by various people about the efficacy of their drugs are enough to sway a sick person or the young person to buy what they sell. Also, worthy to note is the fact that their drugs are inexpensive and so people cannot help but use them without qualified medical doctor's advice.

Another factor responsible for the growing incidence of drugs abuse especially tramadol abuse is peer pressure or peer group influence. In schools especially, students tend to be lured by friends who are into the drug 'businesses'. A young boy addicted to to drugs may convince a colleague to drink alcohol, sniff cocaine, smoke marijuana or misuse tobacco substances in the name of fashion. Some youngsters who are determined not to defile their bodies with drugs are alienated, scolded, and given provocative names like "kolo, john, anti-so", etc. To escape these cat-calls and mockery, some easily give up into the advice of abusing drugs in the nick of time.

Interestingly, advertisement has for the past decades have been one of the powerful tools used to lure men to misuse drugs in this country. On the wings of advertisement, young people get carried away by thoughts of fantasy. They begin to feel that they would in no time, beam with smiles, confidence and appear healthy like the smiling confident looking individuals in the advert who have been provident enough to do the right things at the right time. Elegantly dressed and as men of high social standing too, they have almost always, compelled their audience to accept them as role models through the quintessence of eloquence and high sounding catch phrases and slogans like "Marijuana, the heavenly weed that opens the twin doors of wisdom and prosperity!" "Adonko bitters, bitters of the moment!" and etc. Deceptive as their behaviours and speeches are, several thousands of young talented people are influenced into imitating their lifestyles and habits.

Curiosity is also one of the factors that accounts for the misuse of drugs. Most young are very curious to find out what is contained in certain types of drugs especially tramadol and other alcoholic substances. They see others happily indulging in drugs. Often times, they find men and women of high social standing smoking and drinking profusely. They irresistibly gross anxious to find out what makes other people indulge in these drugs.

Drug abuse has is attendant problems. Most prominent among them is that it usually impairs the health of those who become addicted to the practice. Quite often, habitual users of strong drugs like tramol, cocaine, marijuana and alcohol become emaciated and completely dehumanized. Predictably, this leads to premature deaths. Habitual drug users are noted to be drowsy, lazy and totally unproductive. Though they may eat a lot, they lack the strength and conscience to contribute to the growth of a country's economy. In most situations, the illegal use of drugs leads to mental illness. A drug addict easily breaks down psychologically. The abuse of drugs such as marijuana, alcohol and tramadol provokes acts of violence. Those who misuse such drugs become fearless, aggressive, reckless and prone to acts of inhumanity. This, no doubt, disturbs social order.

To combat the drug menace, the following measures should be put in place. There is the need for a nationwide educational campaign, aimed at exposing every citizen to the dangers inherent in using un-prescribed drugs. As much as education is essential, it is equally important for the government to embark on a health revolution. In this respect, hospitals and well-equipped clinics should be established in all towns and villages in the country to give people access to qualified health professionals. As a matter of urgency, hospital fees must be reviewed to make them affordable to the common man. The National Health Insurance Scheme must be regulated enough to cover most hospital bills especially most medicines and laboratory tests which most patients find out very mind-blowing to afford. The government and the security agencies should not delay in waging a relentless war against users and traders of hard drugs like cocaine, tramadol and marijuana. Whenever they are caught, instant punitive measures should be meted to them. In addition, the government is advised to place a ban on the sale of the most commonly abused drugs in the country. Lastly, quack doctors and drug peddlers should be given proper training to enable them conduct their operations more efficiently and effectively. If not, they should be banned from carrying out their operations.

I hope the suggestions presented in this piece would be carefully considered to provide a lasting solution to this abuse of drugs especially tramadol (currently trending) in our country.