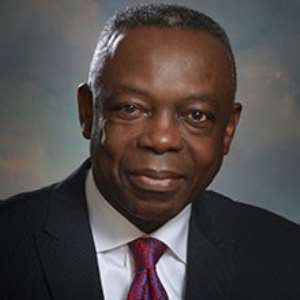 Illicit Financial Flows (IFFs), continue to stifle Africa's development architecture and this translates into money and capital illegally transferred across the continent's borders now amounting to a loss of some $100 billion annually.

Professor Celestin Monga, Chief Economist and Vice President, Economic Governance and Knowledge Management of the African Development Bank (AfDB), said this to the Ghana News Agency on the efforts of the Bank to stem IFFs against the backdrop of accelerating Africa's industrialization.

He said AfDB supports African countries to fight against IFFs in undertaking risk assessments and building capacity of anti-IFF personnel, such as investigators, prosecutors, judges and provides help to national institutions that recover assets.

He said the Bank hopes the development of appropriate national laws and policies to combat IFFs and the recently held a capacity-building workshop on the role of Parliamentarians across Africa, would help in this regard.

The Bank also provided a grant to the African Tax Administrators Forum and the Collaborative Africa Budget Reform Initiative (CABRI) to build the capacity of government officials in budgeting and tax administration.

The Chief Economist said the Bank is also participating in the Anti-Illicit Financial Flows Working Group coordinated by the UN Economic Commission for Africa (ECA) to carry forward the recommendations of the report of the former South African President, Mr Tambo Mbeki Panel on IFFs.

'We have undertaken independent research and have also collaborated with partners including Global Financial Integrity and the OECD.'

Internally, the Bank has taken steps to tighten its fiduciary safeguards and internal controls to ensure that its lending is used only for its intended purposes.

Prof Monga said the AfDB's establishment of the Africa Integrity Fund (AIF) is in response to the challenges facing the Bank's Regional Member Countries (RMCs) in the fight against prohibited practices and illicit financial outflows.

He said the AIF's ultimate aim are to reduce the prevalence and impact of prohibited practices and illicit financial outflows in the Bank's RMCs by strengthening core priorities, in particular prevention, detection and investigation, and the sanctioning process, as well as by supporting knowledge creation and dissemination.

The Chief Economist said the Bank Group Strategic Framework and Action Plan for the Prevention of Illicit Financial Flows from Africa established in 2017 highlights the general anti-IFFs principles and standards of the Bank Group and outlining clear directions and principles across four main areas, including internal control and safeguards, assistance to RMCs, increasing collaboration with international partners, and capacity building for staff.

Mr Ken Ofori-Attah, Ghana's Minister of Finance, said IFFs 'remain the elephant in the room but the least talked about.'

He said according to a Global Financial Integrity statistics, about $ 170 Billion annually and over $ 1 trillion has evaded Africa up to 2013 adding that 'These gargantuan financial resources when redirected into the economy of Africa would have a different narrative in terms of infrastructural development even in the face of a $ 70 B infrastructural deficit annually that eludes the continent.'

'This is more an African problem. The only way we can resolve together is by working together with our partners.'

Mr Akingbolahan Adeniran, Rule of Law Advisor to the Vice President of Nigeria, said there is the need to amplify advocacy for the return of IFFs arguing that 'In the domestic setting, receiving a stolen asset is a crime. Why is receiving stolen asset from a victim country not a crime?'

Nara Monkam, Research Director at the Africa Tax Administration Forum, said inter-country cooperation at a continental level is required to tackle such practices. In addition, given that illicit financial flows from Africa involve actors from across the globe, and that the laws and policies of non-African jurisdictions have a serious impact on illicit flows from Africa, it has become a priority to review the adequacy of global frameworks in tackling illicit financial flows.

African countries have committed themselves to tackling these flows through target 16.4 of the UN Sustainable Development Goals and the 2015 Special Declaration of the Assembly of the African Union on Illicit Financial Flows.