Amanpour’s CNN programme was a lot more than just about Moesha! 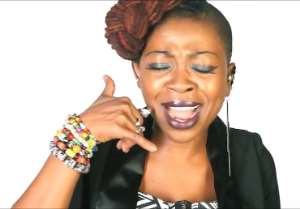 We often complain that the west only shows bad things about us and very rarely the good things. Amanpour’s programme on sex and love in different countries was not meant to cast any country in a bad light. Not Ghana either.

It is unfortunate that the Moesha bit took the shine off what is otherwise a nice programme. The furore in Ghana reminds one a bit of the Muslim anger at Salman Rushdie’s Satanic Verses. Those in the thick of the protests never read the book. Others read only the one offending chapter that was copied and spread around. They failed to see the reference to the prophet in terms of the symbolism depicted in the entire novel. In the same way, many Ghanaians have based their judgment on the two minutes of Moesha that was spread on social network. Many rushed to pass judgment without seeing the rest of the programme, much less the series. Fortunately, whatever “offence” Moesha committed was not a fatwa-inducing one and she can safely come back home to the welcoming arms of her married lover.

But what else is in Amanpour’s programme? . She opens by revealing that Ghana is the fastest growing economy in Africa. This sets the tone for a contrasting view from Moesha who blames a bad economy for her lifestyle. But how can a country growing at such breakneck speed force some women to a lifestyle like Moesha’s?

But before this bit, Moesha also made some interesting comments. She informs us that she has been signed for a stretch mark cream and goes on to talk about “vaginal tightening gel” which she claims many women in Ghana use to give increased sexual pleasure to men to enable them keep them. You have to be a “freak in the sheet”, she says to Amanpour’s delight. Then follows those infamous two minutes. Amanpour was finished with Moesha 10 minutes into the programme. But she would cast a shadow over the rest of it. All the other women Amanpour talked with can be said to be diametrically opposite to Moesha in the essentials of womanhood.

Amanpour considers her subject in the light of the religious experience of Ghanaians. Here, we are informed that our country calls itself “one of the most religious places on earth”. There is proof of that in our 700 different Christian sects distributed among 71,000 individual congregations. And the Muslims were not even counted! Her angle is to find out how people who identify themselves as the most Christian in the world do sex.

Bishop Duncan-Williams answers for the Ghanaian clergy. Amanpour attends his church and hears him warn his congregation against marrying a woman because of her shape – and we see cuts of Moesha in the background. Whereas Moesha may think a woman must date a rich married man to cope with the debilitating effects of a hapless economy, Duncan-William thinks “faith and audacity” are what are required to meet the same challenges. He claims their job as religious men is to present a biblical alternative to the cultural polygamous thing we had before Christianity.

When Amanpour pointedly asks him why women in the Bible have been portrayed as devilish, he goes into that canard about women being “vulnerable because they are emotional beings”. It is clear the bishop does not know we do not say such things about women these days. Asked how he counsels men who are unfaithful, he is evasive. And if he thought women deserve respect and honour, he gives the clichéd response of respect not being something one demands but a thing one earns.

Duncan-Williams’ philosophy is contrasted with Azizaa’s. She is described as a controversial and outspoken singer whose graphic lyrics and provocative image put her at odds with the status quo. We see scenes from her Black Magic Woman video. Azizaa says Ghana’s biggest problem today is “New Age Christianity” – the type Duncan-Williams does. (Azizaa is shown shaking her waist when Duncan was talking about God taking man and putting him into the Garden of Eden and giving him a woman)

She maintains Christianity is the one thing that is killing Ghanaians. She, herself, practices beliefs that she says were in existence centuries before Christianity came to us. Unlike Moesha who may think a woman’s power is in her buttocks, breasts and vagina, Azizaa says women need to understand that their power is not just the brain but the womb. For her, the womb “is everything”. Asked if she is in a relationship, she categorically says NO. And adds: “having a man doesn’t validate me!” Imagine that coming from Moesha!

I do not know how popular Azizaa is as an artist in Ghana. We do not hear of her in the same breath as Ebony or Shatta Wale but she seems to be doing serious stuff, thematically. Perhaps her appearance on the programme will give her some international exposure. Her Black Magic Woman video on YouTube has many positive comments.

To find out what being married means to the average Ghanaian woman, Amanpour talks to two articulate women. They talk of the need to keep your man well-fed and satisfied sexually – a theme that recurs in the stories of most of the women interviewed in the programme. One of the things to do to attract him is to wear beads around the waist. The sexual bit is stressed with one of them saying a woman must make herself available for sex “even if you don’t want” and we remember Moesha who cannot say no to sex with her rich lover even if she has the proverbial female headache.

Throughout the programme Amanpour repeatedly asks her female interviewees about their own happiness, wishes and wants. The answers are not always positive ones. Men can cheat but not women. The church will grant a divorce in the case of a cheating woman but a cheating man only needs to apologise. We live in a culture in which men’s infidelity seems socially acceptable. It is even a “badge of honour”.

But only rich men can wear this “badge of honour”. A James Town man says he has only one wife to whom he has been faithful all these years because he is too poor to afford other mistresses.

What about women who have their own money and, unlike Moesha, do not need a man to take care of their “financials”? One of them, a “strong woman” in James Town who owns a canoe is too busy to talk to Amanpour about sex, and love. But Madam Mercy the “Market Queen of all Markets in Greater Accra” has all the time in the world to talk. She is a woman who has achieved great status and wealth. Despite her wealth, she is married to a man who already has another wife. No, she is not jealous. She does the duties traditionally expected of a wife. And, yes, she is fulfilled sexually. After all, African men are strong sexually – that is why they think of marrying two wives. She claims her man does not cheat. Why should he, with two wives? But Amanpour still presses her on the issues of love, happiness, and fulfilment. She agrees that love has to be shared, sometimes, in Africa.

Amanpour reunites with Brigit, the trokosi girl who brought her to Ghana twenty years ago. It is an emotional meeting. After Amanpour’s trokosi programme featuring the then eight-year old Brigit aired on 60 Minutes, a sympathetic American benefactor paid the princely sum of $10,000 to free and adopt her and bring her to Florida. Today, Brigit works as a Human Rights Activist, splitting her time between America and Accra. She has just completed a Master’s degree in International Relations and Human Rights. She is still 26 (about the age of Moesha) and recently turned Christian. Is she in a relationship? We do not quite get her answer.

Mama Zimbi is a kind of agony aunt for marriage, love and sex. She hosts a radio talk-show that pushes all the boundaries helping women take back control of their sexuality. When Amanpour visits the studio, there is a call-in from a girl who “wants to have it all the time”. Mama Zimbi tells Amanpour the various sexual positions she recommends for women. But then we are informed that women in Ghana who are not getting sexual satisfaction in their marriages are not talking about it and so are not able to educate their young girls. There is the persistence of a problem here.

The programme ends with Amanpour talking to Armateifio and Mama Adjei who portray Ghanaian women as modern and successful. These are women who have reclaimed their own personal and sexual spaces. They are not afraid to talk frankly about sex and even ask their men to go down on them as we see from an excerpt from an episode of An African City – Ghana’s own version of Sex and the City. These ladies claim that African women talk about sex all the time just that they do it behind closed doors – like the act itself. Both actresses are as successful as the modern African women they portray in their series. Amanpour’s programme has made the long journey from a dependent modern Ghanaian girl to independent women who will not need to sleep with rich married men to be able to pay their bills. Or do they also do it but just do not talk about it on international television?

Akufo-Addo Extends Partial Lockdown For Another Week
49 minutes ago