The Grace To Grass Interdicted Vice Chancellor (VC) Of The University Of Education, Winneba (UEW), Now A 'Student Activist'. 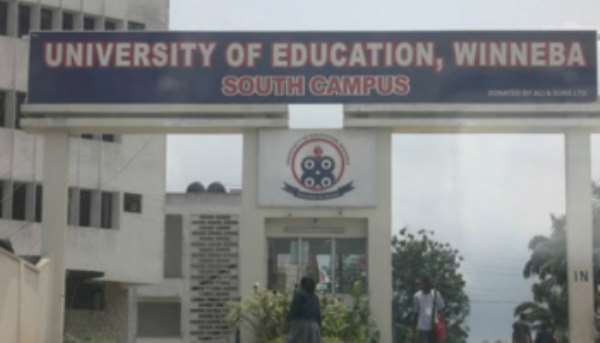 The legally interdicted VC of UEW, after having exhausted a plethora of avenues, both overground and underground, with the misplaced hope of being restored to his previous position as VC of UEW, has of late, turned into a 'student activist'. It is good for mother Ghana that some public officials who hitherto had disrespected, disregarded, lampooned and lambasted students, have all of a sudden, made a 'Machiavellian' u-turn to satanically court the support of some innocent students to organise demonstrations in the name of some grievances which he the interdicted VC himself failed woefully to address during his tenure as VC of UEW.

The shambolic Wifi at the lecture halls and students halls of residence, reached its zenith during the interdicted VC's failed administration. It is welcoming news to note that the administration of the Ag. VC, Rev. Fr. Prof. Afful-Broni, has got a contractor at both the north and south campuses of UEW, busily fixing the ineffective Wifi that he inherited from the interdicted VC.

Almost all the student halls of residence, have been awarded on contract for renovation works. Contractors are expected to commence works shortly.

In the last 3 months, about 120 lecturers have been recruited to augment the shortfall, which the interdicted VC appeared unconcerned with. The lecturer to student ratio, has improved dramatically.

In addition, the Ag. VC ensured that no student of UEW paid a pesewa more than the fees recommended by the National Council For Tertiary Education (NCTE) for the 2017/2018 academic year. The file of the over bloated fees, slapped on students by the interdicted VC and his heartless Finance Officer (Theophilus Ackorlie) at the end of May 2017, was humanely added by the Ag. VC administration to the packing case of the interdicted VC when he was legally ordered to vacate his office on 14th July 2017.

The Ag. VC has proceeded to institute periodic meetings between the Dean of Students Affairs and all Course Reps, to enable him have first hand information on students' issues. This would lead to timely redress of most students’ issues.

Contrast the human face of the Ag. VC to the interdicted VC's heartless Finance Officer (Theophilus Ackorlie), who once allegedly told a delegation of Bachelor of Business Administration (BBA) students, sent to him to plead for a reduction in their exorbitant fees that he Ackorlie pays his wards fees in US Dollars, and he is not complaining, so with the BBA students paying their fees in Ghana Cedis, which was easy to come by, their complaints had no grounds.

For the first time in the history of UEW, the Ag. VC’s administration worked tirelessly and made it possible for students to register online from home for the second semester of the 2017/2018 academic year. The interdicted VC was in office for 22 months, and looked on with disdain, while students spent long hours in queues to go through manual registration at the hands of some hostile staff who forgot that without the students, they have no jobs.

Rev. Fr. Prof. Afful-Broni has been in office as Ag. VC of UEW, for just 9 months, and has managed to achieve the above feats within that short period.

Reasonably, one would therefore expect students to stage a demonstration clamouring for the administration of Rev. Fr. Prof. Afful-Broni, to continue running the affairs of UEW 'forever'.

The right to participate in peaceful demonstrations and processions, is guaranteed under Article 21 (1)(d) of the 1992 Constitution. However, under section 1 of the Public Order Act 1994 (Act 491), the Police must be notified 5 clear days before a planned demonstration, and the organisers must obtain a Police approval before the said demonstration can take place. It is an offence, punishable by up to a year's imprisonment or a fine, or both, under section 9 of the Public Order Act 1994 (Act 491), to go on a demonstration without a Police permit.

I therefore entreat all students who intend to take part in any peaceful demonstration, to abide by the provisions of all relevant laws and regulations of this country. It is as a result of wilful disregard for the relevant laws and regulations of this country (Act 663 as amended), that has earned Professor Mawutor Avoke, the additional title of "interdicted VC". If any student wishes to also be addressed as 'rusticated or convicted students' of UEW, then they should continue to hold nightly meetings with the Kamassah's, Quarshie's, Baabiyeri’s, Adhzalie-Mensah’s etc at SEMSA.