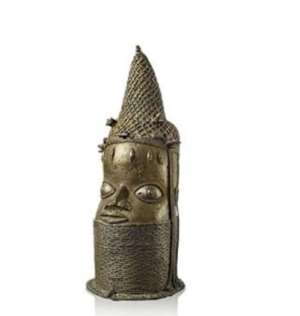 Following our recent article on the coming auction of a Benin commemorative head in Würzburg, Germany, we have received confirmation that only the commemorative head of a queen-mother would be on auction. (1) The other ten Benin artefacts which the Nazis looted from the Jewish businessman, Rudolf Mosse and auctioned in 1934 would not be in the auction of 10 March 2018. The auction of the Benin head should fetch between 40,000 and 80,000 Euro.

One question that now arises is where the other ten pieces that the Nazis confiscated are now to be found.

Apparently, the auction house has written to the Nigerian embassy, about this Benin commemorative head but has received no answer; should either the Nigerian government or the Oba of Benin show interest in the subject, the auction house would be willing to put them into contact with the family that at present holds the Benin head. (2)

It will be recalled that the Nigerian Commission on Museums and Monuments (NCMM) has recently declared that Nigerian artefacts abroad should be returned unconditionally. We have suggested that such a declaration should be specifically addressed to institutions and governments abroad. (3)

A statement from the Nigerian authorities or the Oba of Benin on this issue would be in the interest of all since the discussions on looted Benin artefacts have become heated in Germany where such matters are seriously debated by both holders and their opponents.

The author has 256 publications published on Modern Ghana.