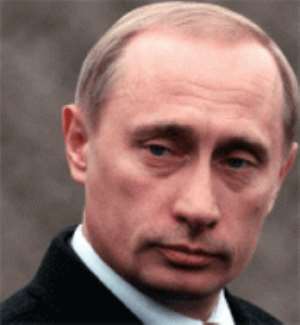 Sarah Huckabee Sanders, the White House press secretary, seemed perplexed, sticking to a drafted script. Politicians on the Hill were troubled. The Pentagon attempted to be reassuring. The Russian bear was on the move in indelicate fashion – again.

In his fourteenth state of the nation address, President Vladimir Putin was keen to focus on Russian-made and prowess in military hardware. This was not an occasion to talk about the tepid and peaceful. The talk, rather, would be about the latest in jets, missiles (cruise and intercontinental) and drones on steroids.

Mindful of the March 18 election, Putin did spend the first half of his presentation speaking about targeting poverty (20 million Russians live below the poverty line) and improving life-expectancy. “[F]rom the point of view of the extremely important task of ensuring people’s quality of life and welfare we, of course, have not achieved the level we require. But we have to do this and will do this.” Such aspirational talk gave way in the second half to matters military.

It proved to be quite a show. Putin added to the props of a nuclear theatre, layered with display and illustration. He has an election to win, but despite being all but guaranteed victory, tough talk is mandatory. “They need to take account of a new reality and understand [this]… is not bluff.”

The nature of nuclear theatre is that bluff and reality are two sides of the same scratched coin. Putin made use of video presentations featuring two nuclear delivery systems that were described as beyond detection. In doing so, he was channelling a Trump styled reality show filled with showmanship, threat, and biting promise. In an effort to reap popular appeal, he also invited members of the public to come up with names for a few of the weapons systems. The Russian Ministry of Defence has duly obliged, enabling submissions to made to a site.

One delivery system, in particular, was described as including a “low-flying, difficult-to-spot cruise missile… with a practically unlimited range and an unpredictable flight path, which can bypass lines of interception and is invincible in the face of all existing and future systems of both missile defence and air defence.” This cruise missile is supposedly identical in its external appearance with the Russian X-101, with one difference: it’s nuclear powered.

Another system involves a nuclear-powered underwater drone with the means to travel thousands of miles before finding its point of detonation in, let’s say, a US port, thereby evading any missile systems above water.

Finding a dig at the United States impossible to avoid, one video featured the US state of Florida peppered by Russian missiles. No one in Washington could have been surprised by the show. Since the Bush administration’s 2001 decision to withdraw from the Anti-Ballistic Missile Treaty, accompanied by a failure from Washington to chew over Russian worries over missile defences, Moscow’s military has busied itself.

In frank terms, Putin noted the genesis of the latest modernisation program. “During all these years since the unilateral US withdrawal from the ABM Treaty, we have been working intensively on advanced equipment and arms, which allowed us to make a breakthrough in developing new models of strategic weapons.”

Further stress has been made this year by the Trump administration on improving US anti-ballistic missile capability, though the object has been the overly inflated threat of North Korea.

The Trump administration’s Nuclear Posture Review has also proposed adding to the US nuclear inventory, including a low-yield warhead for the US submarine fleet and a new cruise missile deployable at sea. There was no mention of a nuclear-powered cruise missile, which was abandoned in the 1960s for fears that it would leave a trail of uncontrolled radioactivity from its unshielded reactor. As ever, one upmanship between Russia and the United States persists, with US intelligence sources claiming that the Russian variant crashed in testing.

The unmistakable stress in the Nuclear Posture Review is not one of moderation but enthused embrace for the nuclear cause. “The tone of the document,” poses a sombre Jeffrey Lewis, “as well as some of the more controversial proposals, gives the impression of enthusiasm for the arms race.” Threats are stressed and underlined; rival powers are blamed. The US is painted as a paragon of progress in the field of nuclear disarmament, while “others, including Russia and China, have moved in the opposite direction” adding “new types of nuclear capabilities to their arsenals”.

The Putin nuclear show also pokes fun at such goals as total nuclear disarmament, especially by the main nuclear states. Reducing the nuclear arsenals of the two major powers possessing them has lead to another development: modernisation.

This enables Trump to, for instance, emphasise in self-contradicting fashion “the long-term goal of eliminating nuclear weapons and the requirement that the United States have modern, flexible, and resilient nuclear capabilities”. Members of the nuclear club persist in their reluctance to abandon their lavishly expensive toys. The trend, then, is towards improvement, adjustments, and refurbishment.

Euphemised in such a way, the threat of human extinction is obfuscated by different political packaging, not to mention furniture that is quibbled over at summits. Being modern entails enlightenment, and mass killing with the latest, state of the art nuclear weaponry. The concern for some US officials will be Trump’s imminent insistence that what the Russians can do, the US can do better.