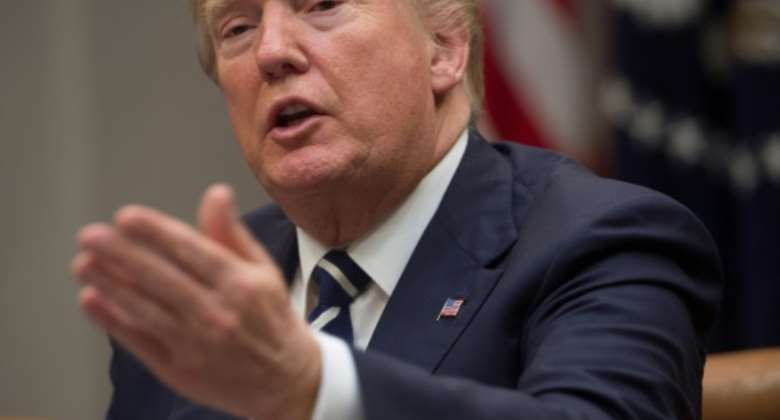 From Voice Of Reason
LET’S CHARGE OUR AFRICAN LEADERS AND POLICY MAKERS to live up to our expectations and potentials.

Yes, you heard me right, stop whining and find a way to fix your “shithole”—literally. Do you have any problem with that? I don’t think so! Just stay with me for a second and I’ll tell you why. I know I’m going to get a lot of flaks for this but you should get used to my writings by now. Truth hurts!

In case you need a refresher on major news item, I want to weigh in on the President Donald Trump’s “shithole” comment on Thursday afternoon, in a meeting on potential deal on immigration in United States.

No one—absolutely, no one— in America really disputes the fact that we(Africans, Caribbean and Haitians) have invaded their country because of the poor policies, laziness, corruption, embezzlements, lack of accountability and other self-inflicted social ills that are working against our progress and potentials at the home front.

Now the question appears to be whether President Trump used the phrase ”shithole nations” to describe those countries or whether he used some other corrosive term.

Either way, I think he was hundred percent right. OOPs!

“Say what?” yeah I know you were expecting me to be mad, weren’t you? Sorry to disappoint you and rain in on your wishes. He’s a straight talker.

We should be rather mad about lying to ourselves and trying to find a scapegoat— to inflate and massage our deflated egos and pride—for telling us the truth. Our leaders have shamefully put their heads between their thighs trying to attack the messenger of a true statement, instead of pledging and pleading to us and do everything and anything right so as to prevent the brain drain and the drowning in the high seas. In fact, we have no pride and not willing to make the best use of our brains, time and natural resources at our disposal.

Please don’t go anywhere because this is just to whet your appetite.

Now here is the thing: Whatever word he used to describe his feelings and indignation towards immigrants, his intent was clear and on point. It was exactly what his base supporters (millions of Americans) who voted for him feel about us coming to invade their country.

Trust me, a lot of people in United Sates of America—including some senators and congressmen and women— feel the same way about us. Fortunately or unfortunately, he is the only person who has the guts to say as it is .And I respect him for that.

The bottom line is, behind the scenes— at their drinking parlors, barbershops, hair salons and dinner tables— they question the legitimacy of so many African immigrants invading their country. By the way, how many immigrants from Norway, Sweden, Germany or France do you know who are dying to stay in United States of America? How many of them are busy crossing the ocean to come to Africa to die in the hostile wilderness?

For one thing, I don’t think President Trump is a racist in the traditional sense. But I think he’s racially ignorant or insensitive to people because of his luxurious upbringing. He’s uninformed about a lot of things .Nevertheless; he speaks for the majority of Americans .So to single him out with racial tag is absurd.

Oh, I heard that African Union is demanding an apology from president Trump, for allegedly referring to African nation as “shitholes”. Reportedly, the African Union Mission in Washington, DC expressed its’ “shock, dismay and outrage”. Excuse me! Where have you been for the past four decades?

How many white people have we seen on the boats crossing the ocean and getting drowned? Whose fault is that when hundreds and perhaps thousands of African youth die every day in the middle of the ocean, in an attempt to find the green pastures elsewhere?

Go to New York City alone and see how many Ghanaian doctors are there. What about the nurses? How many American senators who have stolen from their country and hid the loots in African banks? So you don’t think something wrong with us? Who says we don’t appreciate our conditions we live in now? We love it that is why we’re not doing a damn thing about it.

Shame on African Union. Double shame on our leaders and more shame on our policy makers. You have the guts to complain about the ‘shithole’ comment when you know very well that you helped to perpetrate our ‘shitholeness’ condition.

Let’s bring it home. Given the chance, the NPP government can make a difference and change the destiny of many Ghanaian youth, however, others are busy derailing the vision of the party—and I’m not even talking about the people on the other side of the aisle

Who authorized the compulsory DVLA towing fees, TV levy, First aid kit, etc? The bottom line is some individuals are busy destroying the party from within and we’re standing idle by. Hey, we can’t even keep an autopsy report in a secured place.

Look, we live in a country that has been torn by coup d’états, corruptions, tribalism, embezzlements, selfishness, and plagued by manner of social ailments for over three decades. However, it’s still managing to remain more or less united, to keep ethnic-cleansing tendencies at bay. It’s strong with its fragile and infant democracy and still holding on to hope against hope.

Unfortunately, it’s taking us too long to see the socioeconomic Promised Land because we glorify and worship those who steal from the nation’s coffers in any form. We don’t take our jobs serious and we’re very cheesy when it comes to integrity. We focus on activity instead of accomplishment. And punctuality is missing in our DNA. In other words, we’re solely responsible for our current conditions on this side of the planet.

Not only that, Ghanaians in the Diaspora who want to come home should have the right to complain about things back home, but we refer them as “whiners” and treat them with scorn because we’re too sensitive and content.

So are you offended when your country is called a “shithole”? Get used to it. Until we are not desperate to go there and desperate to panhandle for money to fix our nations –whereas we’re sitting on huge natural resources and fertile lands— we will continually live in a shithole and die miserably. Check out some of our hospitals’ wards, school infrastructures, pot-holes infected and accident prone road network across the land ,they are nothing but shithole samples of poor standard living .

Did I offend anyone yet? Sorry, tough it up because I’m a little soft on this issue this time.

Kwaku Adu-Gyamfi (voice of reason)
*The author is a social commentator.