Conte Vs Mourinho Is The New Movie In Town! 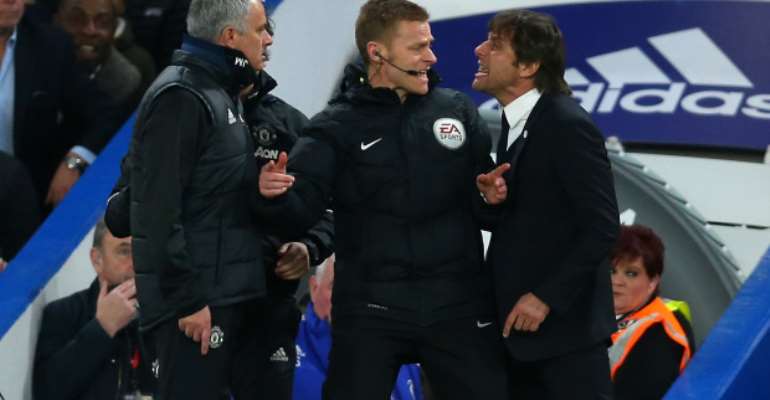 Forget Manchester City and their beautiful football as the league title is already theirs to lose, there's a new movie in town, and it called Antonio Conte vs Jose Mourinho. Its hard to ignore this ongoing nonsense between Chelsea's last two non-interim managers if you're a Chelsea, or football fan. It reminds me of the spat between Kiiza Besigye and Yoweri Museveni during the 2001 presidential elections, over who had HIV/AIDS and who didn't. It was amusing in certain aspects to watch two grownups having a go at each other in public, it got very personal quickly, but that time I wasn't much interested in politics. Word has it that NRM elders such as Bidandi Ssali, Kirunda Kivejinja, e.t.c, got their 'son' Museveni on the side and advised him to drop it. Yes, journalists, as always, played very much a central role as well in guiding, shaping, massaging the conflict.

In this case, the football Association has been called in to intervene to calm the two managers, but I guess its already too late. We are likely to hear more of this before and after the game between the two clubs on February 25th, at old Trafford. The first jab was thrown when Chelsea demolished Mourinho's Manchester United in the 4-0 last season, as the two managers had never crossed the paths directly before(Conte was in serie B when Mourinho managed in Italy), though Conte did have a little tiff with one of Mourinho's fanatic, Marco Materazzi, whom he reminded that ''nobody uses wigs anymore. You can have a hair transplant now, but unfortunately for him, brain transpplants still dont exist''

Mourinho has now accused Conte of match fixing which never happened in the first place. That means he has used a lie to accuse someone in the name of a comeback and to sound smart.Conte was acquitted of charges pertaining to sporting fraud in the Cremona trial for the Albinoleffe game prior to joining Chelsea. That means nothing stood against him.

It is like you, being a suspect, are prisoned temporarily during the time police doing the investigation. Four months later, the investigation is completed, you are clear of guilt and be freed. Yet still you go around, ask for job, and people keep pointing at you saying: the guy was arrested for murdering, he is a bad guy. How is that feeling? Do you feel angry and unfair, especially when you are a father, you have a daughter who look at you as a model. I could understand this if this was a Uganda court, but it wasn't it.

When Conte joined Chelsea last season, he was billed as the 'nicer' and 'calmer' Mournho, not anymore. He throws back the grenades thrown at him, and some people are being entertained.

I feel saddened that amidst all this and other times, Mourinho is bent on destroying his Chelsea legacy. I still love the man. But I don’t know how long can I remain immune to this. Its so sad that someone that called Arsene a voyuer years back has been bitten by the same voyuerism bug, the same bug that made NRMs to critically follow the FDC presidential elections between Mugisha Muntu and Amuriat(as if they had a stake in the party).Mou needs tension around him. If it isn’t there, he’ll create it, and sooner or later it damages the clubs he represents. Respect for his achievements remain. Respect for him as a person is diminishing.

Conte has obviously been deeply offended by the match fixing remarks that he has repeated how little of a person Mourinho is. I could understand his frustration since after seeing the press at his time at Juventus right after he was acquitted. But that was Italy and Conte just cut to the chase and was clear even though he poured down shit-storm to all those who accused him. This Conte shouldn’t respond anymore to these jibes anymore and should simply avoid questions especially in pre match press conferences since, well it doesn’t do anything good with the aura and news that’s been created.

It reminds me of an old adage -Do not roll in the mud with a pig. You get dirty and the pig loves it.The bigger man walks away, laughing. FDC's Besigye has done it with Andrew Mwenda, what about Conte?

Abbey Kibirige Semuwemba
Chelsea fan in the deep end of Yorkshire, UK
"In tribute to the United Kingdom and the Republic of Uganda, two bastions of strength in a world filled with strife, discrimination and terrorism."