The Mugabe story and its Ghanaian parallels 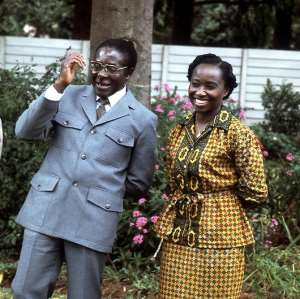 So did we, in Ghana, get a better deal with Rawlings than the Zimbabweans got with Mugabe?

Rawlings first burst on the Ghanaian scene in May 1979 with his unsuccessful coup. He was standing trial when his mates made another coup, released him from jail and made him lead them in the successful coup. He led the nation in what he called a house-cleaning exercise and allowed elections that had been scheduled to happen before the putsch and handed over power after four months. He left the army, was in the wilderness and staged another coup in 1981. This was the only successful coup Rawlings ever made in his life! He stayed on for the next 19 years.

While Rawlings was making or getting involved in his coups, the independence struggle in Zimbabwe was getting to its end. There was the Lancaster House Agreement of 1979, Obasanjo’s anger with Thatcher at the Commonwealth conference in Lusaka and Zimbabwe’s independence on April 18th, 1980. At the same time, Rawlings was in between two of the coups he was involved in. Mugabe came to power the year before Rawlings’ successful 1981 coup. After 19 years (eight of them in civilian garb), Rawlings handed over power and left the political scene. But Mugabe still continued in power. At the time Rawlings left power permanently, he was far younger than Mugabe then was. Rawlings is, today, living “peacefully” in Ghana with him and his family very well provided for whiles, at the time of this writing, the superannuated Mugabe faces an uncertain future.

Yes, Mugabe stayed on for too long. No matter how good you are, there must come a time when the mere fact that you are old should let you give way to someone else. Nelson Mandela is the best example in Africa of not hanging on in old age. He could have continued if he had wanted to. Leopold Sengor, Abdou Diouf, Julius Nyerere, Kenneth Kaunda, Daniel arap Moi, Ahmadou Ahidjo (even if he regretted later) are among the African leaders who showed that there was no need to go on and on. Even though there have been a few notorious examples, it is not completely true that African heads of state, especially the ones who led the independence struggle, stayed on in power until their deaths. Mugabe is one of the notorious examples. In Ghana, it is possible that if Nkrumah had not been overthrown, he, too, would have stayed on till death like his great rival Félix Houphouët-Boigny. Mugabe’s case may have been worsened by his remarkable longevity.

It all started so very well for Mugabe. This well-educated and polished gentleman in the English style (forget about all his vituperations against the British – he admires them and they also gave him a knighthood in 1994 when he was still in their good books) really meant well for his countrymen. The world supported the black struggle in Rhodesia. In Ghana, university students went on demonstrations in support of that struggle. There were many black students from Rhodesia, Namibia and South Africa in Legon in those days. Bob Marley’s song, Africans a-liberate Zimbabwe…, is still a delight to listen to. Zimbabwe’s independence was a joy to many around the world. There was so much goodwill for Mugabe. Yes, it all started so well. When, and how, did it all go so wrong?

The Zimbabweans themselves have different theories about this. But the one that will interest us most in Ghana is that dealing with his first wife, Sally, our own “countrywoman”. Robert Mugabe met Sarah Francesca Heyfron while he was teaching in a school in Takoradi where Sarah had enrolled for a teacher’s certificate after her studies at Achimota. They wedded in Salisbury (now Harare) in 1961. The couple had a baby boy in 1961 who they called Micheal Nhamodzenyika (a Shona name which means “misfortunes are with us”). Nhamo passed away in 1966 in Ghana from malaria. Robert Mugabe, who was then serving his 11-year jail term, was not given permission to go and bury his son. The couple did not have any more children after that.

When Mugabe was imprisoned with the other leaders of ZANU, Sally went to exile in the UK in 1967 and spent the next eight years campaigning for the release of political detainees in Rhodesia. She joined Mugabe in Mozambique on his release and was with her husband when the second war against the Smith regime started. In 1978, she was elected ZANU Deputy Secretary for the Women’s League. In 1980, she became Zimbabwe’s first First Lady. In 1989 she was elected secretary-general of the Zanu-PF Women’s League and was involved in many humanitarian activities.

It has been said that Sally was a huge influence on Mugabe. It has also been said that Mugabe could say at cabinet meetings that he would have to consult with Sally on certain very crucial and knotty issues. The Zimbabweans loved Sally and affectionately called her Amai (mother). Even so, it was also said of her that she was a strong and assertive woman and, in a way, Mugabe’s own “little nest of vipers”!

Then Sally died of kidney failure in 1992 aged 60. The nation mourned her. She was declared a national hero and buried at the National Heroes Acre becoming the first woman to be so honoured. A postage stamp was issued in her memory.

And it has been said that Mugabe started losing it the day Sally died. He was never the same again. But we should note that Mugabe started doing it to Grace while Sally lay dying. He openly claimed in an interview that he sought the approval of Sally to sire a child with Grace Mugabe since his mother had complained that she was going to pass away without holding a grandchild. Zimbabweans said “Grace stole Sally’s husband”…

Would things have been different for Mugabe and Zimbabwe if Sally (who would have been 85 today if she had lived) had not died or if the couple had had living children? Would Grace have come into the picture? Today, one of the charges levelled against Grace by the veterans is that she did not take part in the fight for independence, something Sally did.

If Sally was a benign influence on Mugabe, Grace was the opposite and a factor that is bringing about his downfall. This is the story that we are all being told today …

Rawlings also has a very ambitious wife. There are some Ghanaians who blame the excesses in Rawlings’ rule on the influence of his wife Nana Konadu Agyeman. Like Grace, Konadu has also been accused of ruthlessly exploiting her conjugal ties to a ruling strongman to amass a lot of wealth and political influence. At the height of her powers, she could make or unmake any politician. There have been stories, not all of them untrue, about her power. She could unilaterally revoke Rawlings’ appointments (ask Joyce Aryee), and we also remember the “identification haircut” of the young man who had the guts to ditch her daughter. We have heard of how spoilt the Mugabe children are. The Rawlings children have also had it really good – getting fat scholarships to study abroad at a time of difficult economic conditions in our country. Even out of power, Nana Konadu still wielded a lot of power, once saying condescendingly that they had been treating Mahama with kid gloves. To be sure, this power of the President’s wife to control appointments and fix jobs for relatives and the children of friends is still very much with us today. It is now Rebecca Akufo-Addo’s turn to eat…

And, like Grace Mugabe, Konadu also wanted to become president. She was exceedingly power hungry, perhaps even more than Grace Mugabe. But the circumstances in Ghana were different. She could not set out to inherit the presidency from her husband by manoeuvring to do away with rivals in the party. She had to seek the presidency on her own merits rather than by hanging on the tailcoats of her husband. She sought her own mandate first in the party of her husband, and then by forming her own party. She failed miserably on both occasions.

Nana Konadu may not be called “Gucci Konadu” but she also dresses in expensive clothes with matching headgear smiling into the camera and displaying all her 50 teeth – a sight that may frighten little children.

Some of the western reports on Mugabe say he has a lot of blood on his hands and refer to the Ndebele massacres. But other reports also say that even though he could be tough against his opponents, he cannot really be called a “bloody dictator”. What about Rawlings in this regard?

One wonders how much Mugabe picked from Nkrumah in his days working in Ghana! His time in Ghana coincided with the time Nkrumah opened up our country and gave sanctuary to freedom fighters from the rest of Africa. Zimbabwe would return the favour. Many Ghanaians went there to work especially after the Nigerian debacle. Sally’s own twin sister, the late Esther Sophia, a medical doctor, was there. Ama Ata Aidoo and Prof Anim were all there too. Mugabe has been a frequent visitor to Ghana most recently at our 60th Independence Day celebrations where he recklessly equated Akufo-Addo with Kwame Nkrumah! He visited his child’s grave in Sekondi at least on one such occasion.

Mugabe’s story is our story too. Gentle reader, do you see any other ways in which this story touches us in Ghana?