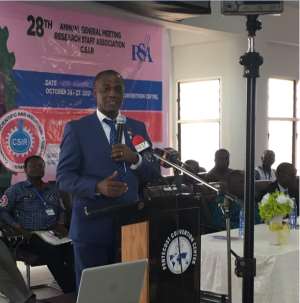 Mr. Chairman, I am really humbled and greatly intimidated by your invitation to me as the Special of honour and more dauntingly to deliver the Keynote Address for such an awesome but critically strategic Council for Scientific National Development.

Mr. Chairman, as if Research Scientist was not enough with one person, but rather with a Council! I.e. the advisory body of Research Scientists that have been formally constituted and meeting regularly on Industrial findings, Huh! That is the Scientific Council whose regular meetings are about Industries I.e. economic activities with the processing of raw materials and manufacture of goods in factories. This is what I termed as Scientific National Development.

The Hon. Minister, indeed in this Council and present at this AGM are part of the 3% of the population of each country, that think and develop nations. And I dare say without equivocation, “only nations whose leaders have lost the providential way towards national development will fail to resource such Councils as CSIR for effective delivery of their mandates towards scientific national development ”. I do not believe Ghana is one of such Countries, Mr. Chairman, Hon. Minister!

Mr. Chairman, let me repeat what I’ve just opined without equivocation, “only nations whose leaders have lost the providential way towards national development will fail to resource such Councils as CSIR for effective delivery of their mandates towards scientific national development ”.

Mr. Chairman, the key word that can bring clearer understanding of the 28th AGM theme is industrialisation. How can we grow Industries Sustainably without creating unhealthy environmental hazards? But most importantly has CSIR gotten the basic structure to lead Industrialisation? Or do we rather have the flexibility to remodel the inter-Institutes functional relations as the catalyst in order to gain acceleration of industrial growth in a sustainable manner?

Mr Chairman, I had the privilege to give a lecture at Regent University of Science and Technology on 4th November, 2016 during her 10th Anniversary on the topic “Re: The Industrialisation of Ghana, the way forward.” May I take this opportunity to give a little highlight in that lecture which will be relevant to the 28th AGM deliberations.

The dream of an average Ghanaian is job creation especially the youth and the key is industrialisation, as I did my best to unfold the dream for the collective destiny of our dear country, Ghana.

Mr. Chairman, Resources or everything (natural resources) that has ever been created by God, including mankind (Human Resources) and have been discovered by Researchers in the form of inventions or transformation agent by we the human beings, came from the EARTH, the WEATHER and the SEAS. True or False?. True.

Mr. Chairman, so “Industrialisation is the productions of transformed Natural and Human Resources for consumptions as a result of Scientific Research for healthy economic developments of nations”.

The foundation of the economy of every nation is therefore made up of the Natural and Human Resources that has been endowed to that nation. So Mr. Chairman, why is it that the economic experts in our country refer to the macroeconomics indicators such as inflation, interest rates, exchange rates, GDP growth etc. as the fundamentals/ foundation of our economy? Aren’t these macroeconomic indicators rather the symptoms of the economy? CSIR is exploring to take her rightful position as the economic experts for Ghana at this 28th AGM and that is the precise definition stated above for Industrialisation derived from first principles.

HOW DO WE INDUSTRIALISE AS A NATION?
Mr. Chairman, At Reagent University’s 10th Anniversary, I touched on and modified the three-legged model strategy towards Root To Success (RTS) by Dr. Kofi Amoah, for industrial development i.e. Agriculture, Manufacturing and Finance.

The arrows and direction of flow show the Virtuous cycle of Wealth Creation by the modified model and the interdependency and relatedness of Finance, Agriculture and Industries. The arrows indicate flow of funds or goods.

A. Finance: The Apex of the triangle by finance connotes the ideology of cyclical wealth creation. The beige-colored arrows pointing to the base depicts how Ghana and nations must deliberately have financing policies for Agriculture and Industries.iz

B. Agriculture: The hen that lays the golden egg of wealth creation. The thick golden arrow is emphasizing how we can use Agriculture to kick-start creating of wealth for financing other industries as well. This in line with RTS is non-negotiable option for wealth creation. The mauve-colored arrow pointing to industries connotes how agriculture produce can feed into industries. The blue arrow also shows how industrial products such as fertilizers and tractors can help improve or mechanize agriculture.

C. Industries: Represented by both Manufacturing and Services. Deliberate financing policies for industries to be developed out of the natural resources the country is endowed with such as food, drug, confectionaries, beauty, furniture, cotton, salt, Oil, gold, ICT, Auto, education, health, sports, tourism, solar etc. The industries to be established are countless as the cognitive brains can develop for Ghana.

Mr. Chairman, this is the source of hope for Job creation, the hope of Opportunities for all and the hope to empower the Youth to create wealth for themselves and the country. This is what I defined as the GHANAIAN DREAM. This is the hope for the next generation of the Ghanaian Youth.

Mr. Chairman and fellow Scientists and Researchers, using the modified RTS, a country like Ghana with such potential and tremendous natural and human resources has no excuse not to be successful industrially. The industries to be established are countless as the cognitive brains can develop for Ghana.

Mr. Chairman, CSIR from the 28th AGM is sending the signal that the continual growth of industries shall seek the balance of social protection and more particularly Environmental Protection.

Mr. Chairman, FIG 2. Is a model tailored towards functional relations among the 13 Institutes of CSIR in order to serve as the catalyst for sustainable Industrialisation. The model is derived from the fact that, there must be research by Scientists of Natural and Human Resources transformation. This understanding automatically regroups 12 of the Institutes apart from IIR as Scientific Research.

These twelves (12) Institutes will serve as the gap closer between the Academia and Practitioners for scientific discoveries. These twelve Institutes can serve as Academic Project Researches initiators and sponsors.

Both the concerns of the Private Sector and introduction of market principles are key distinctive features of the 1996 Act. The Private Sector and Commercialisation Department can both initiate and sponsor interested projects at the Academia. The 12 Institutes and more importantly at the IIR to achieve establishments of respective Industries through New Ventures.

The government on the other hand must mandatorily and deliberately sponsor Scientific Researches and Industrial Prototypes for Industrial Roadshows through a common Commercialisation and Marketing Department (CMD) for the 13 Institutes. So that all the 12 institutes in close collaboration can initiate new ventures through IIR with the private sector for establishments of industries.

The IIR must have a strong legal department. This legal department will develop the legal frameworks for the right application and operations of new technologies for respective industries in conformity to both social and environmental protection repercussions. Example being Mercury in the Small Scale Mining Industry.

The IIR will continuously interact with existing industries for continuous improvement and new ventures for new industries.

The Private Sector has the option which mirrors that of the Government. However, the Private Sector voluntary contribution in the form of Corporate Social Responsibility (CSR) or business interest is represented by broken arrowheads.

Mr. Chairman, the strategic positioning of IRR can be looked critically at this 28th AGM in order for CSIR to serve as the Catalyst for sustainable Industrialisation.

The Small Scale Mining (SSM) sector, especially the illegal part popularly called galamsey has been one industry that the critical role of Science, Technology and Innovation have been greatly abused.

The Geoscientists were grossly neglected and so there is lack of understanding of the characteristics of the ore body and so the environment will be destroyed in search of non-existing gold. Low Technology is mostly applied to appreciate the ore delineation to estimate the probable ore reserve to assess its economic viability. Innovations can never be said to be present as the basic understanding of the science and technology are absent because there are no research done before license are given.

The only prevailing factor was political patronage and reward of mining license without due regard to legal, regulatory and environmental protection. The SSM sector was therefore bedevilled with unsustainable mining. The neglect of Science, Technology and Innovation has greatly destroyed the environment and imparting negatively on the social and environmental lives in the communities of operations. The future generations will not be secured.

The most culprit is the same government that hypocritically superintended the same destruction of our environment. The government has abysmally failed to name and shame the real owners of the concessions but used the arrested workers as cover up. In the end, the real culprit will enjoy the illicit money they’ve made whilst the whole nation will have to pay for about US750M for the next five years, to reclaim and rehabilitate the environmental degradation.

It is travesty of justice when the genuine SSM are made to stop work and losing huge sums of contracted loans from the banks whilst the culprits are walking freely like Woyome.

The country is faced with this debt because Science, Research and innovation were neglected.

Mr. Chairman, the CSIR was reestablished on 10 October, 1968 by NLC Decree 293. It was again separated from her younger sibling, the Ghana Academy of Arts and Sciences, the learning Society since 1958. The essence of the reconstitution was a greater emphasis to refocus on the critical and catalytic leading role that CSIR is mandated to audaciously played towards scientific national development 49 years ago.

I call on the government, that the continual denial of CSIR with dilapidated structures in most of the institutes are crying with deafening voice for repairs and redefinition of use.

Our National development has been tortuously achieved through great inertia because CSIR which is the eye of vision of scientific national development has been plucked off by her younger sibling, the Academy of Arts, like the biblical man of valour Sampson. The CSIR instead of leading always had to seek direction from the Academy of Arts, which is the rest of the body. So collectively, we fail to see far and “to think far”. Rather we are mostly engrossed in the immediacy, shortsighted and unsustainable achievements to the detriment of the future generation. The dictates, directions and leadings given to CSIR by our various governments normally made up of officials from the Academy of Arts and Sciences, suffice to say is like the master blind leading the slave sight. The time is now or never.

Mr. Chairman no nation advances without the leading of constituted bodies like CSIR. China’s accelerated development is due to the fact that, before you can be voted for as President, you must mandatorily be Scientifically oriented. No wonder H.E. Xi Jinping is now looking at Scientific Socialism. Even political ideologies now need scientific touch for survival! And so the time for Scientists leading the accelerated and sustainable Industrial growth is now or never.

On this note, I wish the 28th AGM deliberations a more determined success for CSIR to take her rightful leading strategic position towards Scientific National Development.

Thank you once again for given me the opportunity and to muster courage to share my little thoughts. For indeed, my Alma Mater, Opoku Ware School has as our motto, in Latin “Deux Lux Scientiae” which translates as God is the light of Knowledge.

May the Almighty God of Jacob help the CSIR with His transformational light upon your minds for Ghana’s next stage of accelerated scientific national development.

Thank You and may God bless our homeland Ghana and make her people great and strong.