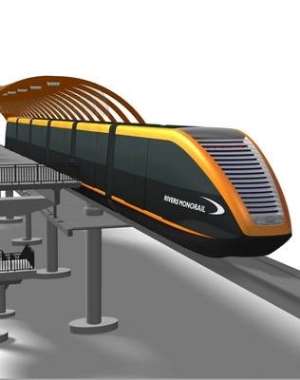 The Metro-Bus system is an inner city transportation system which is to be started in the Capital of Ghana, Accra and its environs, before its future extension to other highly populated cities and regions in the country.

This type of inner city transportation system will be by the use of the trains called the People Mover P35.

The People Mover P35 is a member of the monorail family, and is very cheap, silent, fast, reliable, safe and a less pollutant type of Metro train which uses only renewable energy sources for its operation (Solar Systems and Wind)..

Its main purpose will be for the transportation of people, but will also serve as a carrier for the supply of all forms of water, biogas, cable operator (Television, Telephone and Internet Connection Distribution System through Cable Systems), WIFI signals, high voltage electrical network and others across the city. Each train has a capacity of 360 passengers. The trains will be transported in a 90 seconds interval in all directions, and a train will be kept at each station for only 20 seconds.

Its monorail route will be channeled through underground, on ground and above ground across Accra and its environs.

In all, the company will build eleven (11) different routes(lines) across the capital and its environs, but it will start with three (3), which has been labelled as the Red, Blue and Yellow lines.

The company will also provide taxis and mini buses at their various train terminals to transport passengers at a very cheap price to their various destinations.

With the full funding in place currently, the project is expected to kick start in January, 2018, and end in 2020. It is expected to be operational from January 2020. It will be a "Build Own Operate Transfer" (BOOT) project between a period of 25-40 years.

Some of the expected advantages it will bring to Ghana are;

A. During construction, it is likely to employ 4,500 workers directly, and 9,000 others indirectly.

And when it begins its operations after the construction, it is likely to employ about 4,750 permanent workers.

B. It will bring about a reduction of pollution and congestion in the capital through the removal of lots of vehicles.

C. It will provide a very cheap source of transportation at 2 Gh Cedis for 90 minutes.

This project is being done by the Universal Exports Holding.

Aside this project of theirs in Accra, they are also embarking, and have embarked on similar and other huge projects across the world.

Planting for Food and Jobs failed due to poor implementation...
58 minutes ago