Sincerity And Being Too Careful- The Ibrahim Mahama - John Mahama Politics 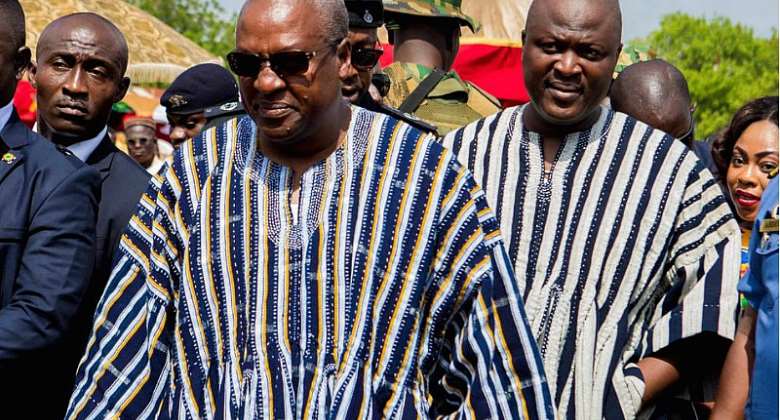 Random acts of sincerity and kindness in most cases are safe and benign, but in the African context they can be expensive if not dangerous. Too much of them in this polarised environment can end up encouraging the wrong behaviors or compromising more than you should. The former President John Mahama is sympathetic by nature and his friends in both parties will attest to that. On many occasions, he had to compromise his standard to accommodate other people's standards in order to ensure smooth running of the country and for businesses to thrive. And because be held sincerity and kindness as the best response in all situations, some ungrateful people took and still taking advantage of him.

Throughout his reign, he lived contentedly with the tension between being inner directed and other directed by other people's preferences and sought appropriate attention, receptivity and boundary maintenance where they helped, not where they hurt culminating in the peace we all enjoyed under his reign. I have listened to submissions by some communicators of the NDC on the Ibrahim Mahama's bauxite mining issue and must say I am shocked and devastated. It must be made clear that there is a difference between being careful and being fearful. Being careful includes looking both ways before putting out a submission. Fearful is believing opponents may, or trying to run you over.

In politics, allowing your opponent to intimidate you comes with a heavy cost, it can push away your allies, can render some supporters docile and can even demoralise sections of the media allied to your course. Ibrahim Mahama so far as I know, is not a card bearing member of the NDC and if we are to critically assess him based on his family's political history and his own activities on the political stage overtly and covertly, then one can confidently say has soft spot for the Npp than the NDC. We have many examples of biological brothers supporting different parties. In the case of Ibrahim, he cannot be described as a political persons he is strictly a business person. This Anti-Ibrahim propaganda did not begin today, opponents of the former President in the past, made several attempts to tarnish his image with this primitive anti Ibrahim crusade.

At a point, the former President's friends on the other side of the divide who knew the facts and could not stand what AFAG and other propagandists of the Npp were pushing against him, boldly came out with the facts to clear Mr Mahama. When AFAG embarked on its facts distortion agenda about Ibrahim (Engineers and Planners) and the Merchant Bank saga, this was what Mr Baako said "I have seen enough records that by Dec 15, E&P would have settled its indebtedness with Merchant Bank"

He went on to defend is position with other authentic documents and was supported in the media by other discerning minds. Then the other propaganda followed, the man who they claimed connived with his brother the sitting President to collapse Merchant Bank, had acquired the bank with the support of his brother. The new management of the bank (Universal Merchant Bank), strongly refuted the allegation. This was the statement the bank's management issued "we state categorically that Mr Ibrahim Mahama is neither a shareholder of UMB, nor does he have a direct or indirect relationship or association with the bank and its shareholders". Interestingly, the very bank they alleged belonged to Ibrahim and his family, donated an amount of $100m to the Akufo- Addo led government to support its one district one factory initiative.

So many attempts were made by the current ruling party and its leadership to tarnish the ex President's image through this fake Ibrahim stories. We heard how the opposition attacked him for deploying his men and machines to dredge the odor river.

I have no personal interest in the ongoing saga and have not been contracted to defend the man and his company, I am writing this post based on what I saw and heard in the past and will do same if same treatment is meted out to any citizen of this great land. And to those who think standing up against this wicked treatment could affect the public image of the NDC, let me ask whether they are aware of the number of ships loaded with bauxite that have left our shores since this administration took over? Do they know the persons behind the ongoing bauxite business? And do they know the effect of watching unconcerned for your opponent to make huge primitive capital through clandestine arrangements?. We all heard Gideon Boako few months ago and how he packaged lies and put them in the media to incite the public against Ibrahim.

It began with the inaccurate information that the former President had sold 58% of Ghana's bauxite to his brother and stated emphatically that the "NDC has no moral rights to caution the NPP led government against leveraging Ghana's natural resources , specifically bauxite through its partnership with China" and justified that disrespectful statement with the fake 58% bauxite sale. So have we detected the ulterior motives behind the misinformation? The sad news is that before the Vice President and his team went to China, some of his cronies had began exporting our bauxite through the Takoradi port.

As part of their machinations, Ghanaians were told that the concession was sold to Ibrahim (Exotic Cubic) on the eve of the last government's departure which is a big lie. The arrangement began as far back as 2013. Per authentic documents available the company have three bauxite concessions in the country at Awaso, Nyinahin and Kyebi Forest. What has Mr Mahama got to do with this? Businesses of Npp business magnates thrived under the various NDC regimes and many of their businesses were established under the PNDC/NDC administrations including Data Bank, Mobitel which was owned by the sitting President, Ken Ofori-Atta, the current Finance Minister, bought Gihoc Pharmaceuticals from the state under an NDC administration under the divestiture programme and other npp starlwarts purchased state owned companies under the policy.

Those who think Ibrahim must be made to face his own music, are doing more harm than good to the NDC. Some of these positions have been taken because of the party's internal issues and that is the other danger. He [Ibrahim] is a businessman and I know has many friends in the Npp including some of the party's top gurus. In politics, everything is possible if you want to make it possible that is why Nana Addo is today dinning nicely with Rawlings. Pray the NPP doesn't use the other door to reach Ibrahim who naturally, already has soft spot for the party [Npp].

Yea, Ibrahim is not a registered member of the NDC but the truth is that, from Adam, by virtue of his brother leading the NDC, he was perceived a member of the party and that perception is today playing against him and his businesses. But let me ask, what is wrong with the NDC pulling him and his businesses to its fold. How many top business men in the country courageously identify themselves with the NDC? And is the party not concerned about this trend? The sitting President courageously appointed his cousins and close friends into his government and enjoying their services so why the fear and this weak approach to the issue ongoing.

It is not about Mahama. His mistake was his finite attention to other people's priorities but to me, I think that is how a good leader must carry himself in opposition, people will ply him and his party with all kinds of ungrateful gestures but that should not stop the great party from pursuing its divine ideals.