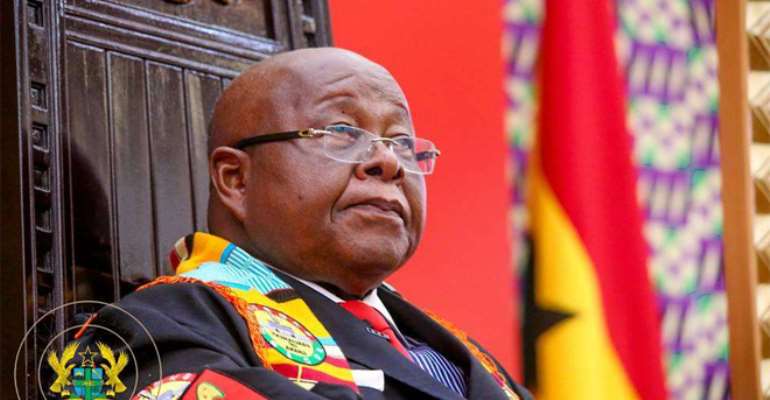 The speaker of parliament, Prof Mike Oquaye, on Friday traced the roots of the current constitutional dispensation to the formation of the United Gold Coast Convention (UGCC).

According to him, the birth of the UGCC laid the solid foundation for the Second, Third and Fourth Republican Constitutions which have cemented constitutional rule in the country.

Prof Oquaye, who was delivering a lecture to commemorate the founding of the UGCC under the theme, '4th August, Ghana's Day of Destiny' in Accra on Friday, said the First Republican rule under Dr Kwame Nkrumah's Convention People's Party (CPP) was like an authoritarian or military rule with draconian laws like the Preventive Detention Act (PDA) that effectively wiped out his (Nkrumah's) political opponents and incapacitated rival parties thus, enabling him to declare a “one party state” under his reign.

The public lecture was attended by President Nana Akufo-Addo; former president, J.A. Kufuor; ministers of state; Members of Parliament (MPs) and the 2016 presidential candidate of the CPP.

“The name Ghana, the flag of the country, the eagle for the emblem of the nation, were all mooted and accepted by the founding fathers of the UGCC before Nkrumah was later invited to join the group before eventually leaving to form his own political party, CPP,” the speaker recalled, stressing that it could be said impliedly without equivocation that Dr Nkrumah was not the founding father of the nation.

According to Prof Oquaye, Dr Kwame Nkrumah achieved a lot for the country as the first president but he ruled with iron fists as a communist, sending his political opponents into prison without trial.

The speaker, who was a former lecturer in political science, noted that it was from the UGCC that the UP and the NPP were born, emphasising that the Danquah/Busia/Dombo tradition is respecter of fundamental human rights of individuals and the rule of law. He noted that it is the tradition that introduced decentralization which was conceptualized by the Progress Party (PP) and the New Patriotic Party (NPP)

Prof Oquaye said that the UP tradition was one that defined true democracy of the nation and also fought for open, transparent and credible elections.

“We are the trail-blazers of democracy in the country. We welcome political pluralism. When we boycotted the parliamentary elections in 1992, we did not resort to violence, but wrote the 'Stolen Verdict.' We had a vigorous opposition outside parliament to put the government on its toes. We fought for the expansion of the electoral college,” he claimed.

He noted that under the regime of former President J.A. Kufuor, the criminal libel law was repealed with the help of the current president, Nana Akufo-Addo, who was then the Attorney General and Minister of Justice.

Prof Oquaye said President Akufo-Addo is going to build on the achievements of former President J.A. Kufuor and bring prosperity to Ghanaians.

He pointed out that the current largest opposition party, the National Democratic Congress (NDC), does not have any tradition but generated its strength from Kwame Nkrumah's CPP.