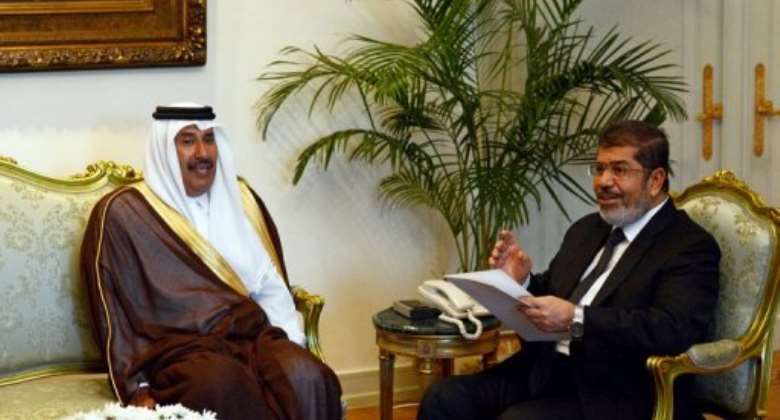 It's time the Muslim world firmly and sincerely tells Saudi Arabia to end it's tacit supports for Israel and the occupation of expropriated Palestinian lands. If Qatar is guilty of supporting terrorism by supporting Hamas (Hamas came to existence solely as a result of the Israeli occupation), then Saudi Arabia is guilty of much worse crimes in its support of various violent groups in the region; of sponsoring Iraq's Saddam in the 80s during his senseless war against Iran with a resultant 1million causalities on both sides (within 8 years); it's supports and funding of a UN sanction programme in Iraq in which between 400,000 to 500,000 children of under 5 died (a programme that clearly meets the definition of genocide.

Denis Halliday, the UN Humanitarian Coordinator in Iraq during the same period was so enraged by the consequences of the sanctions he had to resign from UN, after a 34-year career, in order to gain the freedom to criticise UN. Not Saudi Arabia which was ready to starve a whole population to death to depose a man it helped impose on Iraq. A man Saudi Arabia used to try and destroy Iran).

The same type of travesty is going on in Yemen as we speak, where heaps of dead and starving bodies are resulting from a carnage being inflicted on poor Yemen by the Saudi-led coalition. Saudi Arabia evidently has no remorse about it's sordid track records and roles in helping to decimate these populations nor for it's supports for tyrants at different times, starting from Idi Amin to modern day despots.

Through its immoral meddling in Bahrain and Yemen, it's fueling of the raging conflagration in Syria, its pumping out to the Muslim world violent and divisive ideologies (although Sunni Muslims make up between 80% and 90% of the global Muslim population, a staggering 94% of all acts of terrorism attributable to Muslims are committed by Sunni Muslims due largely to the type of extreme ideologies and funds flowing out if the Gulf States, Qatar included), and with the Faustian Pact it's signed with those whose only intent is to suppressed and ruin the Muslim world are all part of its blemishes. Evidently, the Saudi Arabian regime is a tragedy that has afflicted the Muslim world from the onset and a major dis-stabilisation force in the entire region.

In a move that looks like an attempt to heed Mr Trump's impassioned appeal in Riyadh to “drive out” terrorists, Saudi Arabia coordinated its decision to sever diplomatic ties with Qatar with Egypt, Bahrain and the United Arab Emirates, with the decision of Qatar to welcome Hamas, which Washington brands a terrorist group, as one of its primary demands.

But if Saudi Arabia is mad with Hamas because of Hamas' use of violent methods in the past, including some widely considered to be reprehensible and unIslamic (e.g. suicide bombing), Saudi Arabia must first turn its war on anti-terrorism gun against itself to make any meaningful sense of the Saudi-bloc's schoolyard sermons on terror. 15 of the 19 alleged 9-11 hijackers were Saudi citizens, and so was Osama Bin Laden, the leader of the Al Qaeda terrorist group.

In fact, almost all the groups that Saudi Arabia funds and sponsors in all its proxy wars use such methods and not surprisingly, they all continue to get their bills written off by Riyadh. The UK government has blatantly refused, despite repeated calls by opposition leaders in the UK Parliament, to release the Home Office report of an investigation into the source of funding for acts of terrorism perpetrated in the UK, a report that indicts Saudi Arabia. Prime Minister Theresa May, even in the light of the horrific attacks in Manchester and London has flatly refused to release the report of the investigation, calling the report 'sensitive'. Obviously, Saudi Arabia does not only use its petrodollars to buy weapons from the British government, it has also bought the British Government's silence.

Egyptian despotic ruler, President Al Sissi, during the rule of the last monarch, got a huge cheque for overthrowing President Morsi, a democratically elected government. The late king awarded the handsome bounty to Sissi for getting rid of a democratically elected government. In fact Hamas' only crime is that it has refused to become subservient to the Saudi monarchy and towed it's unconscionable line. Saudi Arabia needs to stop behaving like a petty bully that it is and stop employing crude methods and (outsource) violence to suppress it's neighbours, wanting to force them into submission and a feeble alliance in its unpopular wars and to amplify it's schizophrenic outbursts against Iran. In a nursery school rhyme, Saudi government lectured the rest of the Muslim world during President Trump's visit on the need to end the propagation of extreme ideology that fuels violence. But conveniently, it forgot to add it would commit to switch off its own extreme and sectarian ideology that has seeped into the blood circulation of almost all Sunni extremist and sectarian preachers and violent groups such as ISIS, Boko Haram, Taliban.

Last month, Russian hackers (according to FBI and an independent Qatari investigation) published false remarks attributed to Emir Sheikh Tamim bin Hamad Al Thani on QNA platforms. The fake report said Sheikh Tamim, in a speech at a military graduation ceremony, was critical of renewed tensions with Iran, expressed the need for contextualising Hezbollah and Hamas as resistance movements, and suggested US President Donald Trump might not last long in power. The hackers targeted the Qatari News Agency and all its social media platforms to release the fake report and the only news channels which, without any sort of verification, breathlessly broadcast these fake reports to the world were those of Saudi Arabia and UAE. It is not difficult to see that there was a ploy to discredit the Qatari leaders and enrage the Muslim world on one hand, and President Trump on the other, against it.

Descending below the ridiculous, the Saudi-bloc has designated as terrorists dozens of people with alleged links to Qatar and closed their airspaces to Qatar, and Qatari citizens. One of those designated as terrorist is Shaykh Yusuf al-Qaradawi- an erudite theologian who is claimed to have an affiliation with the Muslim Brotherhood. Shaykh Qaradawi, as early as 1997 had stated categorically that he was not a member of the Brotherhood. Earlier in his life Qaradawi was jailed three times for his relationship with the Muslim Brotherhood and subsequently stripped of his Egyptian citizenship in the 1970s–driving him to seek exile in Qatar.

Similarly in November 2014, UAE government designated major organisations that actually represent the Muslims in Norway, the UK and US as terrorist organisations (including Muslim Council of Britain, Islamic Relief, Council on American-Islamic Relations (CAIR) and the Muslim American Society). In fact the Norway's foreign ministry found the designation so shocking and bizarre it publicly requested an explanation as to why one of the country's largest Islamic groups could be so designated.

The only beneficiary from the crisis that Saudi Arabia and its GCC allies have created seems to be Israel. Israeli leaders have been exploiting Saudi Arabia actions and words to further demonise Iran, its archenemy, and hope the focus on the crisis will eclipse concerns about the Palestinian cause. Saudi Arabia is undoubtedly helping Israel perpetuate its grip on expropriated Palestinian lands and throwing the main resistant group in Gaza, Hamas, under the bus. Of course, the Saudi monarchy may continue to play the Russian roulette with Donald Trump (since Donald Trump and the Russians. it seems, have a thing together) and Nethanyahu, it should at least have the decency to not pretend it's actions and belly dancing have any legitimacy and supports in the Muslim world. It is not getting clearer that what is great about Saudi Arabia are in Makkah and Madina, surely not in Riyadh.