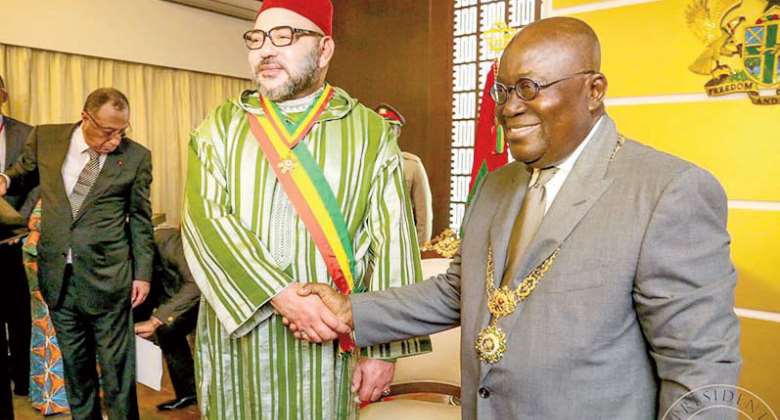 The bilateral relations between Ghana and Morocco have been strengthened with the visit of the Moroccan King, Mohammed VI to Ghana.

The Moroccan King decorated President Nana Addo Dankwa Akufo-Addo with the country's highest national award – the Grand Collar of Wissam Al-Mohammadi – at the Flagstaff House yesterday as part of his official visit to Ghana.

It was in reciprocation of the award earlier conferred on him by President Akufo-Addo, who honoured King Mohammed VI with Ghana's highest national honour – The Companion of the Star of Ghana.

About 27 agreements were signed between the two countries in the areas of agriculture, trade and industry, energy, foreign affairs and regional integration, as well as education and also 20 other private sector organisations.

Tight Security
Security at the presidency had been raised to a high-level following the visit of the Moroccan King.

Long before his arrival at the Flagstaff House at about 1:30 pm, there was high security presence with both military and police men positioned at vantage points and on high alert.

Some of them were seen on rooftops wielding guns to foil any possible intrusion.

Movement to certain areas at the presidency was curtailed to aid the free movement of President Akufo-Addo and his guest, thereby causing a lot of inconvenience for especially anxious journalists, who wanted to capture every bit of the planned activity for the day.

Photo and videographers were seen almost falling over one another to capture the two leaders amidst the tight security.

Some frustrated journalists, especially the local reporters, had to retreat to their holding office to avoid possible brushes with the security guards.

The place had almost become a 'no go' area for especially visitors, who did not have any prior appointments with officials and key staff of the place.

But matters got worse when the Moroccan King arrived. Instead of using the usual route behind the Ghana Broadcasting Corporation (GBC), his convoy was made to go through the front gate of the presidential palace [the part overlooking the Revolution Square].

Security was tight to an extent that a group of local actors and actresses, including Kalybos, Nana Ama Mac Brown, Joselyn Dumas and many more who had come to pay a courtesy call on the president had a tough time gaining access to the place.

Guard Of Honour
On arrival at the presidency, the King was made to inspect a guard of honour mounted by the Ghana Air Force after which he proceeded to exchange pleasantries with President Akufo-Addo.

Later at a ceremony, the president conferred on the Moroccan King the Companion of the Star of Ghana (honorary division) for his commitment to social justice and peace.

Decorating him with the honour, President Akufo-Addo said Ghana has enjoyed closer collaboration with Morocco in the areas of education and science under the rein of King Mohammed.

Nana commended him for his continuous commitment to democracy and peace.

The Moroccan King is expected to depart Ghana to his country sometime tomorrow.