Tears For Dr J.B. Danquah – The President Ghana Never Had 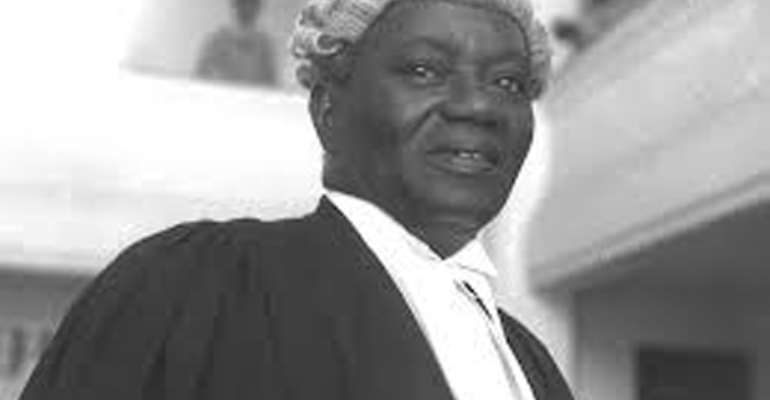 “Dear Dr Nkrumah, I am tired of being in prison on preventive detention with no opportunity to make original or any contribution to the progress and development of the country and I am , therefore, respectfully writing to beg and appeal to you, to make an order for my release and return home … you will recall that when in 1948 we were arrested by the British Government and sent to the north for detention, they treated us as gentlemen and not as galley slaves and provided each of us with a furnished bungalow (two or three rooms)with a garden, together with opportunity for reading and writing…”

‘JESUS WEPT’ (John 11:35) is the shortest verse in the King James version of the Bible. Jesus was weeping over the death of Lazarus. With a prayer he was able to bring Lazarus back to life, even though, as Martha narrated, Lazarus had died four days earlier and he might be stinking.

The President of Ghana, His Excellency Nana Addo Dankwa Akufo Addo, must genuinely have shed tears for the great man, Dr Joseph Boakye Danquah. Unfortunately for the President, it is too late now to attempt to resurrect J.B. Danquah, even if he had the power of necromancy.

History is replete with accounts of J.B.’s contribution to the development of Ghana. As recounted by Professor Mike Oquaye at the lecture on the occasion of the fiftieth (50th) anniversary of the death of J.B. Danquah at the Accra Conference Centre on February, 2015. His achievements include: the formation of UGCC in 1947; invitation to Dr Nkrumah from London to be a paid General Secretary of the UGCC; the choice of the name ‘Ghana’ to replace ‘Gold Coast’; the construction of Akosombo Dam with the formation of a Volta Basin Committee (found in the 1947 Legislative Assembly Hansard); challenging the British authorities to establish a University at Achimota instead of a single University in Ibadan for the whole of British West Africa, the establishment of the Academy of Arts and Sciences ; Pan -Africanism.

The UGCC was formed with the aim “… to ensure that in the shortest possible time… the control and direction of the Government of the country shall pass into the hands of the people..” After the Crossroads Massacre of February 28 (1948) by Sir Gerald Creasy (Crazy Creasy), the governor released ‘A Removal Order’ for the arrest of the “Big Six ‘ : J.B. Danquah, Edward Akufo – Addo, William Ofori Atta, Emmanuel Obetsebi Lamptey, Ebenezer Ako Adjei and Kwame Nkrumah after they had dispatched a cable to the Secretary of State in London: “…unless the Colonial Government is changed and a new Government of the people and chiefs installed at the centre immediately, the conduct of masses now completely out of control with strikes… will continue and result in worse violent and responsible acts by uncontrolled people”… working Committee United Gold Coast Convention declare they are prepared and ready to take over interim Government…”

The Watson Commission which made far – reaching recommendations, described J.B. Danquah as the “Doyen of Gold Coast Politics”. In 1949, when the Convention People’s Party (CPP) was formed, their motto was “self – government now”; this was claimed to be in contrast with the UGCC assertion of “self – government in the shortest possible time”. The question is: “Was 1957 now or the shortest possible time?

The earlier romanticization between Dr J.B. Danquah and Nkrumah froze, leading to the incarceration of Danquah in Nsawam Prison. Nkrumah was insensitive to the plea of JB for his release from prison based on humanitarian grounds, at least, for his asthmatic illness.

JB was never tried in court, and he died chained in the narrow prison cells. There were hints of treason and a CIA connection, an allegation made by Mahoney Jnr, son of the American ambassador Mahoney, in his book. Those were the heady days of the Cold War between the USA and the Soviet Union.

K.B.Asante wrote in “Shed light on the great, not on the infamous nation – wreckers” in the Daily Graphic of 16/02/15: “…Kwame Nkrumah’s government bears heavy responsibility for Dr Danquah’s death in prison…” and adds: “…Dr Kwame Nkrumah was greatly upset when Dr Danquah died”.

If Nkrumah had not been overthrown by Kotoka and Afrifa in February 1966, Ghana would still be reeling under the dictatorship made possible by the one party system, operable after a sham referendum won by 99% ‘yes’ votes in 1964. Our Constitution (1992) states in Article 3(1) Parliament shall have no power to enact a law establishing a one – party state.

Ghana owes it to Dr Danquah for the inclusion of this Article in our Constitution. That is why I am one with Professor Mike Oquaye when he says: “I feel sad on a day like this. Yes, because there is a tragic contortion of our history. This day should be ‘Osagyefo Dr Kwame Nkrumah Day’, but when you call it ‘Founder’s Day’ you take away that which belongs to so many people including him and give it to only him”. Professor Mike Oquaye was reacting to the declaration of 24th September as a Founder’s Day-a public holiday.

It is understandable when pro – Nkrumah elements (CPP, PPP, PNC, and GCPP) would insist on calling Nkrumah, the founder of this nation. Do you expect those who benefited from the largesse of a particular government to slant their benefactor? It is regrettable, though, that those on the other side of the divide fail to take the right opportunity to showcase their heroes: Danquah, Busia, William Ofori Attah, Victor Owusu, J.A. Kufuor. It could be a question of ‘forgiving’ Nkrumah for wrongs done to the Danquah family. But Samia Nkrumah, the daughter of Dr Nkrumah opines: “If somebody wants to forgive us for a crime we never committed, it is up to them. Let us agree to disagree and we are disagreeing with the historical narrative – we are saying that there is another side of the story”.

Let the President, His Excellency Nana Akufo Addo go beyond shedding tears: start the process of ensuring that J.B. Danquah gets his rightful place as one of the Founders of the nation of Ghana. It may only take the removal of the singular possessive (‘s) to be replaced by the plural possessive (s’). Nelson Mandela returned from imprisonment on Robben Island for twenty seven years to become President of South Africa. Nelson Mandela reminds mankind: “When a man has done what he considers to be his duty to his people and his country, he can rest in peace.” May J.B. Danquah’s soul rest in peace.